Slate is a metamorphic rock formed from the transformation of clay under high pressure and temperature. Very homogeneous and sober, with shades ranging from dark gray to black, it is commonly used in floors and roofs due to its durability and appearance. Slate also works very well for façades, combining the aesthetics of natural stone, shaped by nature for over 500 million years, with the thermal comfort and ease of installation of ventilated façades.

In addition to the primary function of blocking unwanted weather effects and making the building watertight, combating excessive heating by the sun, preventing the loss of thermal energy, and blocking the wind, among others, the façade also strongly reflects the personality of a project. With a metallic substructure on the external walls of the building, the ventilated façades become physically distanced from the skin and the main body, through which the air moves, providing greater capacity for dissipating solar radiation. Its multiple technical advantages in terms of thermal and acoustic insulation and its adaptability to any type or dimension of architectural project have made it a resource increasingly used in buildings of all types.

Another advantage of the ventilated façade is that the external layer can be composed of different materials, finishes, colors and shapes. Stones, such as slate, have the advantage of high durability and the desired aesthetics of a natural material, with small variations in texture and colors between the pieces. Slate withstands extreme temperatures, hardly accumulates snow, is fire resistant and is completely waterproof. Also, because it is 100% natural, it has a reduced environmental impact and each piece is handmade without chemicals or additional treatments.

To meet the market demand for the application of slate tiles to façades, engineers from CUPA PIZARRAS have developed CUPACLAD, a ventilated façade system available in different formats depending on the type of slate fixation and its arrangement on the façade. To get an idea of the possibilities it presents, we highlight some projects that use this product.

In the Social Housing for Mine Workers project, by Zon-e Arquitectos, for example, the angular volumetry is a geometry that has emerged from some fundamental laws appointed by urban regulations. The formal result is something between a petrified object, the shape of a mountain, and a disturbing organism floating on the mountainside. According to the architects, “this “crystallographic” object has the same dark color of the local slate as a piece of coal, it absorbs almost all the light it receives and reflects a small amount of it, calmly showing us its rich geometry.”

The ECDM project, Mix of Commercial Activities Binet, is an innovative, creative and modern building designed with natural slate. This building is part of an urban renewal project initiated by the Paris City Council in 2011 to reinvent the Binet district and open it up to the French capital. The innovative natural slate design looks like a black arrow pointing into the Paris sky. The slate flooring offers a sleek, modern look.

At HGA's SNHU Innovation and Design Education Building, the building's exterior reinterprets the region's traditional architecture of barns and covered bridges, and the same slate cladding extends from the walls to the roof of the building, creating unity in the design. The multiple widths of the slate pieces form a dynamic pattern on the façade.

In the project by KANT Arkitekter, Tandrup Kollegiet, Denmark, “the key elements of the design are the combination of the distinctive black façade covered with natural slate blocks in combination with white balconies cut into the slate. The black and white façade makes the building stand out from the street while the scale and dimensions mimic neighboring properties.” In this case, the regular pattern of the slate pieces contrasts with the busy volumetry of the façade and its respective openings.

According to Alma-nac's architects, “Through construction forms and specific material choices, including slates and stainless steel clips placed alongside deep angled wood-clad reveals, Split House creates a continuous set of shadows and changing reflexes throughout the day."

The possibilities are many, and the sizes of the pieces and the patterns used on the façade can vary according to the requirements of each project. With a durability of over 100 years, natural slate is an extremely resistant material for roofing and façades and, unlike artificial products, the color and properties of slate remain unchanged over time without the need for maintenance.

Learn more about CUPACLAD cladding and other products from CUPA PIZARRAS in our catalogue. 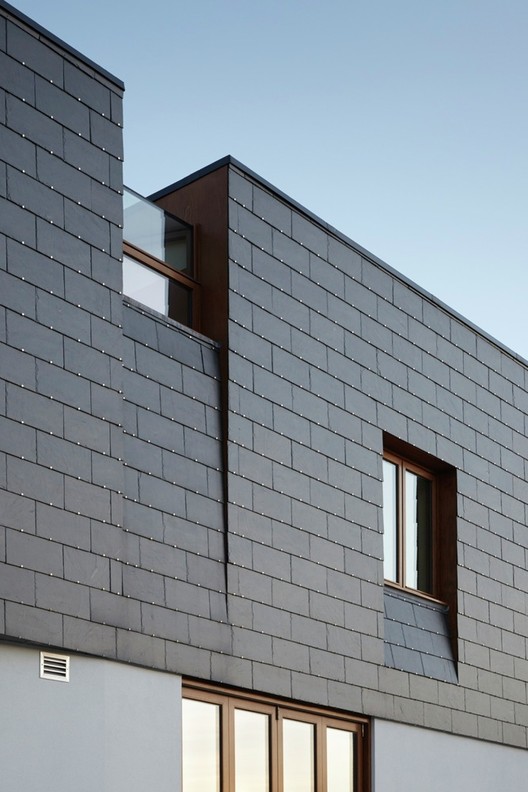