Save
Flat in Kitashirakawa / IN STUDIO 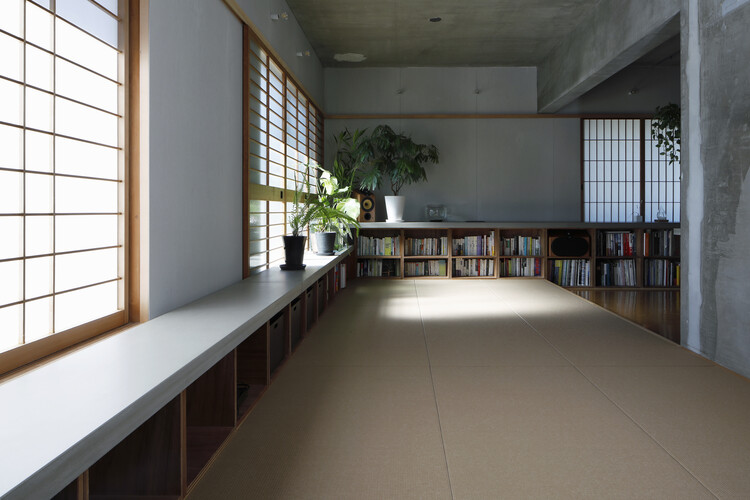 Text description provided by the architects. We had to leave Tokyo to live in Kyoto. We thought that since we were going to live there, we should think about living there. Kyoto is an ancient city surrounded by mountains. The city's economic scale has restricted the height and floor area ratio of its buildings so that you can see the surrounding mountains from almost anywhere. The city is surrounded by large bodies of water and greenery, such as the Kamo River, the Imperial Palace, and the Botanical Gardens, which have been developed up to modern times.

In other words, the city of Kyoto is in fact an overlay of buildings from the Middle Ages to the present day on an urban structure based on an ancient topography, created in the Middle Ages and renewed until the modern age. All cities, of course, have accumulated time, but Kyoto's is particularly remarkable.

I have decided to live in a renovated flat in the north of Kyoto city. It is located at the foot of Mt. Yoshida, a place of deep historical habitation starting from the ancient times of the middle Jomon period, next to which there is a medieval emperor's tomb called Goryou, and in the neighborhood flows the modern Biwako Canal and the University Botanical Garden. Around the area, there is a modern university, and a modern student and residential area. The multiple layers of time that existed in the city of Kyoto, across topography, urban structure, and architecture, are also present in this area, including the flats, in a reduced version. It was thought that this sustained time would be a reliable basis for living.

The idea of renovating the house was not to make everything new. Surrounded by new building materials, it would feel disconnected from the time of the city. On the other hand, to keep everything old would be inappropriate for modern life, and would fix our lives in nostalgia. However, it is good for a temporary stay on vacation. In order to live in Kyoto in a sustainable way, we thought it would be better to have a space where the old and the new are juxtaposed, as in the city of Kyoto. I would like to live in a space with the thickness of time, where the permanence of time of the old is juxtaposed with the modernity of time of the new.

The first step was to dismantle the infill of the flat and remove the crosses that had been directly attached to the concrete. Unexpectedly unearthed, the surface of the concrete from 30 years ago is rough. A new, smooth, large piece of ECP (extruded cement panel) is placed waist-high around the counter, and a floating table is placed in the middle. Between the concrete and the ECP, a cementitious flexible board is used for insulation and wiring. A mixture of old and new cement materials forms the frame of the house.

The two-tone structure of the dwelling is made up of new building materials, 30-year-old concrete and sliding doors, 50-year-old old furniture, and a 700-year-old mausoleum forest that has been growing on the ground for 5,000 years. You can see the continuity of today's life to the ancient times and feel that you are living on the time that has lasted. The time of the city flows into the dwelling and we live there.

We open the shoji screens from the city every day to look at the forest of Goryo, we keep fish from the Kamo River on the ECP and decorate it with wild plants, and we have the lotus from the botanical garden painted on the sliding doors. The table and tatami mats are large enough for a dwelling, and acquaintances visit. The flat is a closed space to protect the individual family, but by letting the time of the city flow in, copying the image of the city, and accepting people from outside the dwelling, people's lives can be opened to the city without opening up the space, and the dwelling can gain openness. 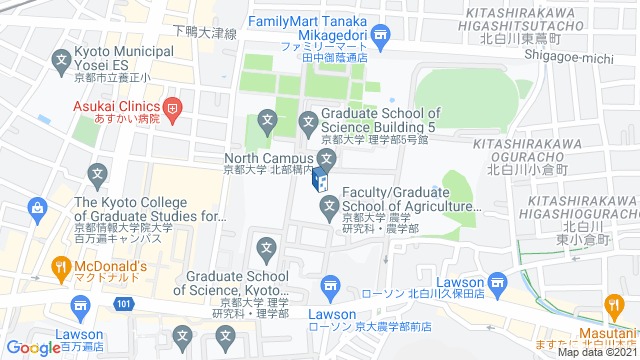 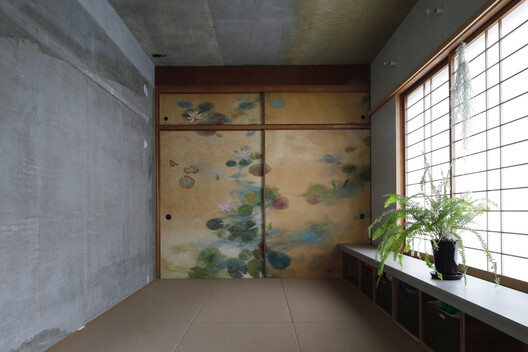 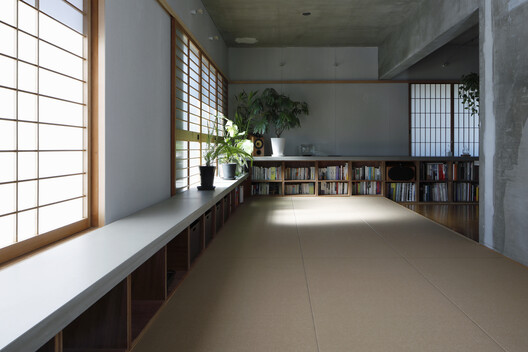