The Royal Institute of British Architects (RIBA) has revealed the six shortlisted buildings contending for this year's RIBA Stirling Prize. Celebrating its 25th year, the award is given to the United Kingdom's best new building. The selected buildings demonstrate "the innovation and ambition that lies at the heart of exceptional architecture", varying from a city mosque in Cambridge to a remote bridge in Cornwall and a vibrant gathering space in Kingston. 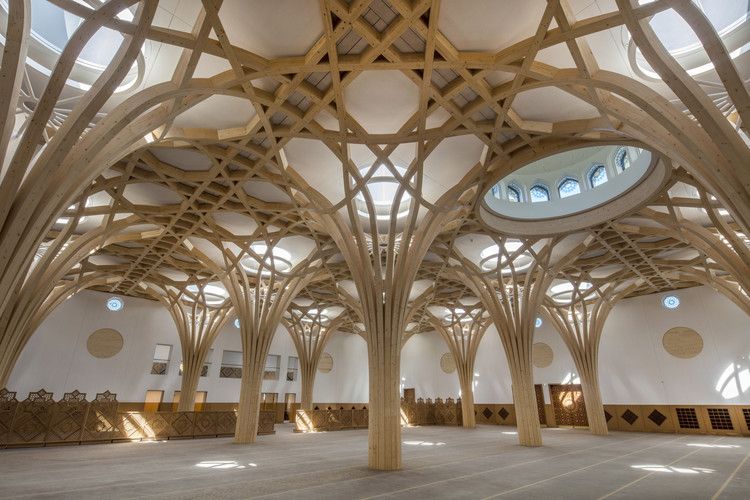 The selected projects vary in location and function, but unanimously explore their local environment and context in creative and innovate ways. Each proposal explored how people navigate major global challenges, highlighting the critical role that architects in the UK play in creating sustainable environments. The Stirling Prize will be announced on Thursday 14 October 2021 at Coventry Cathedral, as part of the UK City of Culture 2021 celebrations.

The 2021 RIBA Stirling Prize shortlist demonstrates the innovation and ambition that lies at the heart of exceptional architecture. From the holistic sustainability of the Windermere Jetty Museum to the creation of a new urban community in Cambridge; from the unconventional use of historic building materials and techniques at Clerkenwell Close, to the creation of dynamic social spaces at Kingston University Town House, these projects push the boundaries of our discipline and demonstrate the positive impact that quality architecture has on people and our planet. -- Simon Allford, RIBA President

Read on to discover the six shortlisted projects along with excerpts from the Jury's evaluation.

This new bridge is beautifully executed at all scales, from the way it respects the silhouette of the landforms it abuts, down to the tactile detail of its path, made from slate on edge. Retracing the approximate width and length of the natural land-bridge and castle structures that have long since fallen into the water, the bridge notionally links past with present and physically connects two stranded sections of the castle precinct. With its highly ceremonial presence, articulated in every piece of finely crafted stainless steel, it also allows contemporary visitors to retrace the steps of predecessors who would have passed through this section of the castle to gain entry to the grand hall on the island side. This is much more than a bridge. It is a connector, an enabler, an interpreter and a spectacle all within its own right.

The urban intervention of inserting a mosque capable of welcoming 1000 worshipers within a low rise, residential neighborhood, without dominating it, is masterful. Its presence is clear but modest, considering the size of the mosque relative to the two storey terrace houses around it. This is achieved by setting it back from the street, progressing through the Islamic garden, then gradually increasing in scale to front portico, atrium with café to one side and study center to the other, through to central ablution areas. The building then rises at the rear to the largest mass of the prayer hall, which shifts in geometry to face Mecca.

The urban approach of ‘loose’ interconnected courtyards is very successful and creates a delightful series of spaces. The walk from Market Square through four interwoven courts to reach Landscape Court is a pleasure, and easily accessible by all. The landscaping, both hard and soft, is particularly successful in integrating the buildings within a holistic and rigorous external environment. The scheme manages to feel as though it is part Cambridge college and part new piece of city. As such there is a slight ambiguity of what is truly public and what is private communal space for the residents, yet publicly accessible. This is deliberately employed in order to foster a communal sense within the development and an encouragement to use the space accordingly. With almost no private amenity space in the form of balconies, most external space is communal, either at roof level or ground level, so a resident wanting toenjoy a sunny afternoon is more than likely to bump into a neighbor.

Nestling into the eastern shore of Lake Windermere, the Jetty Museum creates a compelling composition of vernacular forms which achieves an unusual reconciliation of the reassuringly familiar with the strikingly contemporary. When seen from the lake its dark shed-like buildings are embedded in the wooded hillside behind, but on arrival the Museum exudes the confident identity of a major cultural institution. Everything here has been carefully considered as part of the design in terms of visual impact, functional performance and response to the context and environment. Considerable thought has been put into the selection of materials, in particular the use of oxidized copper, the primary material of the exteriors, which is already weathering to a variety of subtle natural hues.

15 Clerkenwell Close's non descriptive title belies the astonishing architectural triumph that dwells at the simple address, occupying a plot of land a stones throw from Clerkenwell Green. The 7 storey building is the architect's own development comprising one or two flats per floor, a double height architect's studio at basement and ground and the architect's home on the top floor. The development occupies the extent of the site appearing to have the proportions of a cube, with the facade divided into squares. A pathway along side leads to a tiny delightful urban pebble garden, belonging to the Council, but landscaped and maintained by the architect client. One of many parts to this storey where a decision has been taken that is a little unusual and not obvious but has an outcome that helps the project sparkle (for the occupants and the public.

Of the two ambitious projects from the same client to make the shortlist, the Town House is the more conventional architectural project. It is very accomplished. The challenging brief framed a bold aspiration to design the beating heart for Kingston University within a building worthy of the international stage. Combining two dynamically opposed uses –dance studio and library -the result is both technically and spatially excellent, generating a warm, dynamic energy that truly captures the spirit of learning.