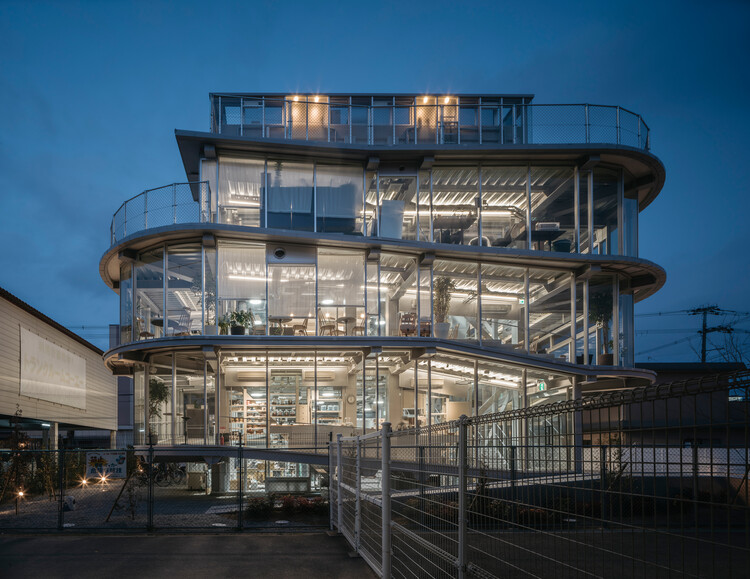 Text description provided by the architects. We aimed for such an architecture that pulls people and involves them into a spiral and sublimates them. It is located in Higashiosaka City, Japan, where the structure of Lowertown is concentrated, along the elevated railroad track that was once a freight line. We have created a plan centered around a coffee roasting machine in such a glamorous city where people's activities and lives intersect with chaos, and the flow of people rolls up around it.

A bakery workshop and a cafe counter are also settled on the square core in the center of the building, which serves as a production site. Customers and employees, or those who live and work in the surrounding area, gather to the core and rise around it. The building is transparent, the swirling slopes and the core are visualized, and the functions and the flow of people make sense in the surrounding area. Once you see this spiral, you will be attracted to the inside of the building.

From the beginning, the founder intended to set up a cafe and high-class bread workshop as a new business and inhabit at the top of them in secret. He required a view like scenery in a person’s mind’s eyes composed of the vortex of human behavior rising. It will encourage the human mind and suit Instagram’s topic. The idea of how to create the architecture is just putting the cubic core as a production area, surrounding it with the human flow and sublimating them. That’s all. Instead of creating a shape, I have been conscious of the events that appear around there.

However, a certain order is required to establish the flow. The floor height standards of the core and the slopes were 4.5 m and 3.0 m, and the ratio of the sloping was set to 1/12. The slope is supported by a cantilever from the core, and the width and gradient of the slope can be flexibly adjusted no matter what function comes.

I am strongly aware of the flow of the environment as well as the flow of functions and people. The sun's rays that enter through the glass heat the floor and air volume of the slope, creating an updraft. Cool outside air is created on the surface of the earth and invades through the ground window of the core, rises vigorously through the atrium gaps between the central core and the sloping inside the building, and is exhausted from the ventilation window and the movable window at the top of the core. We are always creating a mechanism to create circulation between the inside of the building and the outside air. The sunlight does not break the indoor environment hotly, but circulates the air and becomes an engine that promotes natural ventilation. In winter, the solar altitude is low, especially the reception of sunlight is large, the south side of the slope becomes a sunroom, and when the ventilation window is opened, the air is warmed to the extent that a mirage dances on the window.

The slope floor material was very cheap, just structural plywood put on the steel deck plate, but oil stain was applied on it. We painted on the floor as if it were a canvas. There is a whirlpool of rising diversity. With the painting, the surface of the floor fascinates people.

All functions are exposed and visualized. Each function appears as a lively and rich unified body. People are attracted to where they can feel meaningful and freedom. We created “naked Spiral around Functions”, an architecture of flow where everything gathers from the surrounding area and swirls and flies as it is. 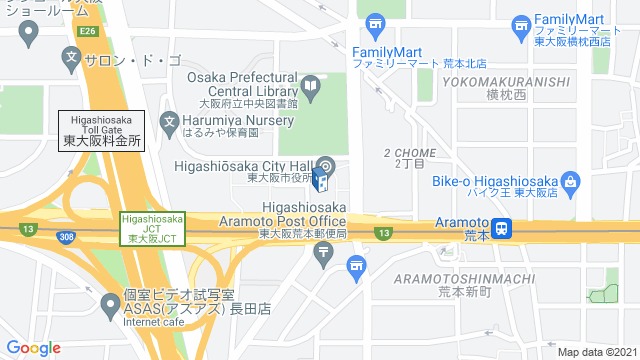 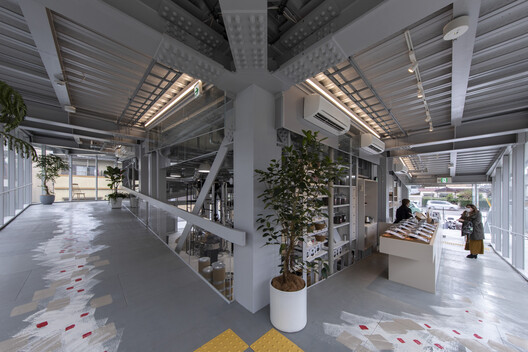 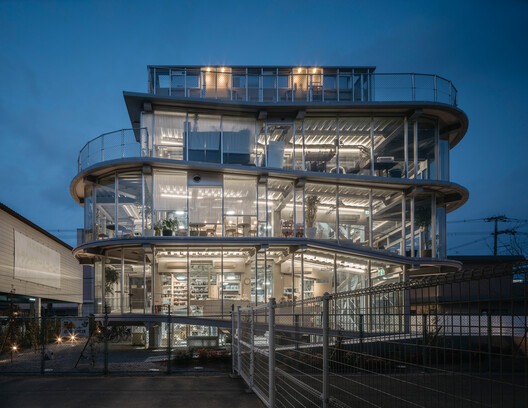