Save
The Highlights of Concéntrico 07: Sustainability, Spatial Experiences and New Readings of Public Spaces
Share
Or
Copy

The 7th edition of the International Architecture and Design Festival Concéntrico proposed new readings of public space through a series of temporary installations that re-imagined various places throughout the Spanish city of Logroño. Emerging architecture practices and artists from around the world shared their perspectives on the public realm and the spaces of social interaction by exploring various themes and experimenting with new ways of understanding urban spaces.

Each edition of Concéntrico presents city dwellers with new visions of public space, illustrating alternate possibilities and prompting a re-evaluation of the everyday places of coexistence. Through the years, the festival has become a tool for testing the opportunities of the local urban environment, and at the same time, provided the citizens with a more comprehensive understanding of public space as a place of co-creation. This year's Concéntrico showcased a deeper focus on sustainability, as each intervention was designed with minimum alterations to the materials and was specifically conceived to be disassembled. The following are some of the highlights of this year's edition.

Designed by Rafael Moneo in 1973, the Logroño Town Hall defines a large urban square surrounded on two sides by porticos and meant to foster public life in the context of a restrictive dictatorship. LANZA Atelier's intervention builds on Moneo's ideas of the public realm as a space of collectivity by proposing new pedestrian flows and defining new areas of activity and interaction. The installation consists of three large-scale circles the height of a bench, made of stacked red brick, which occupy the square, embrace the arcades' columns and redefine the movement of people towards the centre of the space. The intervention brings a more human scale to an otherwise monumental public square, allowing users to appropriate the space.

Located next to the Church of St. Bartholomew in Logroño, the installation proposed by Paradigma Ariadné explores the importance of narratives and symbolism in defining spaces, as well as the quality of architecture to carry and convey information. The intervention is an archetypal hut made of wooden frames similar to the ones used to stretch leather-based parchment, on whose surface a descriptive text can be read. The adjacent church and the martyrdom of its eponymous saint inspired a reflection on the "skin" of buildings in its capacity of communication medium, a nod to the tradition preceding the appearance of the printing press or one still present in Arabic cultures today.

The installation Circum references the primordial act of "enclosing" delimiting a space, representing the first form of architecture and place-making. With this intervention, P + S Estudio de Arquitectura argues for a less prescriptive design of public space, one that embraces indeterminism and allows for unplanned activities and interactions to occur. Set within a park, the installation comprises a series of identical modules whose succession and density define a space. From the shape to the connections and the method of achieving the stability of the element, the module is a direct expression of the materiality and the mechanics of the structure. Through the use of a basic unit, the installation incorporates a variety of spatial configurations and programmatic scenarios.

The intervention proposed by architecture studios Palma and HANGHAR occupies the narrow passageway between two buildings of the former tobacco factory of La Rioja. Consisting of a series of spaces forming "a spatial procession of corridors and rooms", the project completes the two street fronts and introduces a domestic scale while conveying to the site the qualities of built space. The installation is created using thermo-clay bricks, a ubiquitous material that becomes the spatial unit of the project. Ensuring the material continuity, the floor of the passageway is covered in discarded brick chips, which slow down the movement of people and produce a sound that becomes an integral part of the intervention. The programmatically generic but morphologically diverse spaces, together with the floor's material continuity and sensoriality, provide users with an immersive experience.

Located within an urban square populated by a diverse array of elements comprising several kinds of urban furniture, a statue and a landmark tree, the intervention aptly ties together these various features while creating a landmark operating with dualities on both urban and symbolic levels. The project consists of only two gestures: a line running diagonally across the square and a circle, which significantly transform the experience of the place. The circle configures a new meeting space with the existing tree at its centre, while the bar restructures the activities of the square and, at the same time, creates a backdrop for the existing statue. The circle does not touch the ground and only sits on three contact points, giving the installation both a lightness and a sense of fragile equilibrium symbolic of current times. The black paint treatment provides the intervention with a unified look, highlighting the form rather than the materiality.

Focusing on the correlation between the growing urban environments and the disappearance of animal species, and especially the risk of extinction faced by pollinating insects which are essential to food production, VAPAA Collective explores the idea of a type of architecture and urban space that fosters coexistence with other species. The installation creates a habitat for pollinating insects within the public space, highlighting the growing need to accommodate nature within the urban environment. At the same time, the project was designed to be disassembled, inviting citizens to adopt the units and help sustain biodiversity at a community level. 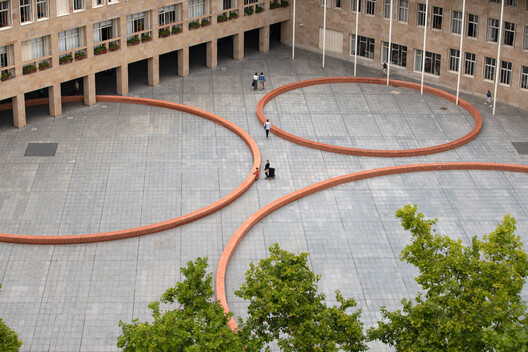