Save
Tower and Urban Block in Novosibirsk / DROM + Brusnika 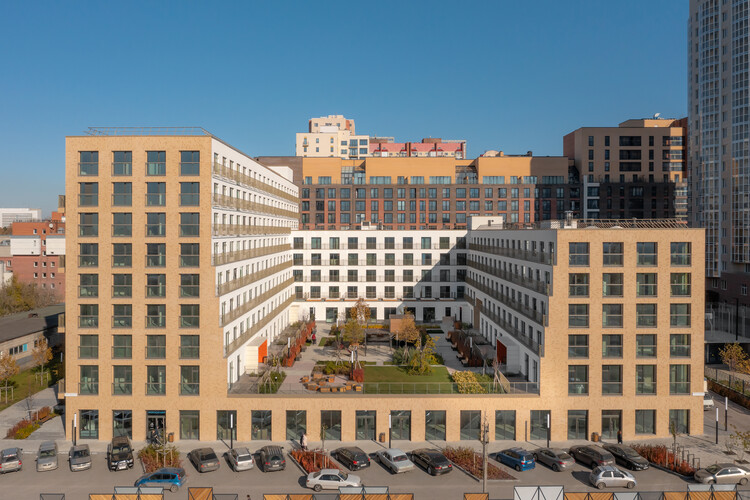 The team first designed a master plan for two land plots and later developed the buildings to fit in. The project comprises a U-shaped block with a tower. A quiet pedestrian street links the houses, and the neighbouring housing estate can be reached by crossing a small park. In contrast to the eclectic and sparse houses surrounding the new plot, the shapes of new buildings create a denser and more diverse cityscape.

The project was carried out in two stages — the tower was constructed first, followed by the adjacent residential block. The tower is divided into two thin 16 and 17-storey plates. Both the inner corridor between the plates and the staircases are painted yellow and illuminated when it gets dark. The level variations between the plates created by electric lights and colour are transformed into an architectural signature element.

The plate shift in the tower is both vertical and horizontal, highlighting the entrance on the ground floor and shaping terraces for two penthouses on higher floors. The south-facing facade gains depth due to its open recessed balconies in all the apartments overlooking the Ob, the main river of Novosibirsk. Only fire escape windows overlook the northern facade, which was intentional due to the presence of an unfinished neighbouring building on this side. Air-conditioning units, made of perforated metal sheets painted deep grey, are fitted next to the windows. The overall number of apartments in the tower is 96.

The U-shaped block is joined with one-storey podium. The western, northern, and eastern facades make up a single street front line with varying heights ranging from five to nine storeys. The block podium, which lifts the courtyard above the street level, faces south. Its low height creates a spectacular view of the Ob River for the residents of three houses. The street facades are clad with sandy clinker brick, the ones facing the yard are finished with white stucco. The choice of materials accounts for the idea of privacy for the hidden from view inner park-yard. The yard is equipped with a playground for 3 to 5-year-olds, a gazebo and street furniture. Small terraces, owned by residents living on the first floors, also open onto the yard.

Terraces are formed on the inner facades of the block. In order to improve solar exposure for the yard and apartments, the building sections gradually rise from 5 to 8 storeys west-wise. Compact French balconies facing the inner yard create the rhythm of courtyard facades with their apertures and openwork railings.

The block comprises 153 flats ranging from small studios to 4-roomed apartments. The layout design was performed by Brusnika. 172 parking spaces and 75 storerooms located under the yard were available for purchase along with the apartments. The outer podium along with the block hosts cafes, shops, and a spa-centre fitted with a swimming pool with their vast panoramic windows overlooking the street. 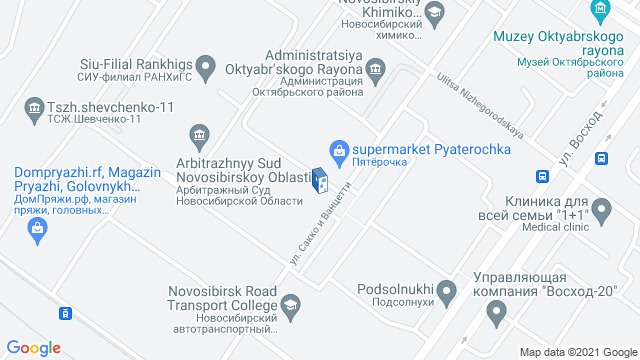 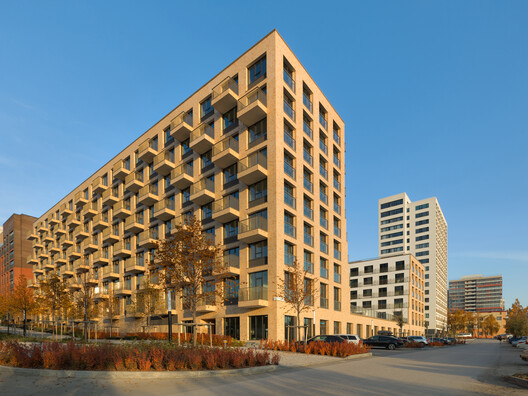 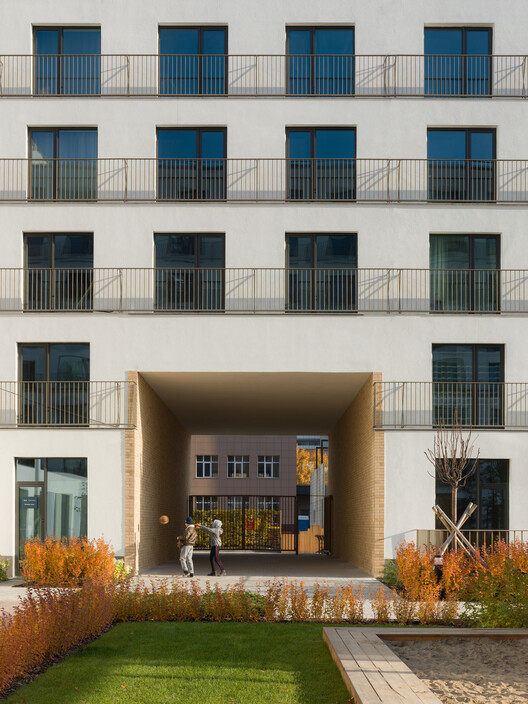