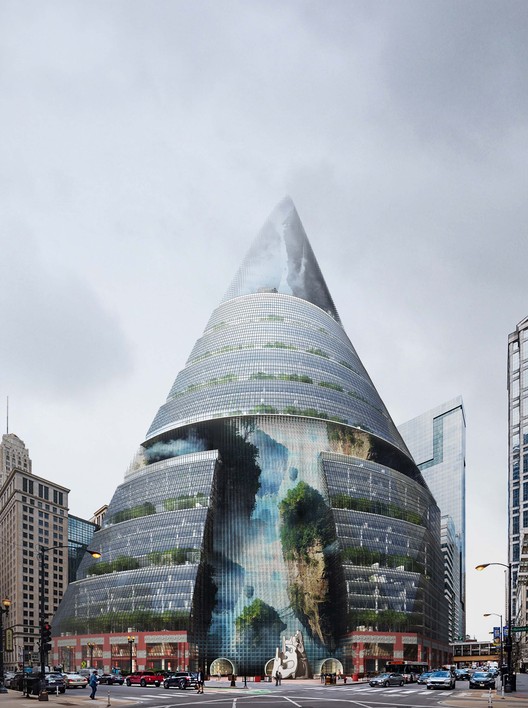 The competition aims to revive the building through "restorative architecture while preserving its architecture and public character". The competition was open to students, young architects, designers, planners, and artists, resulting in 59 entries from 5 countries. The seven selected finalists for the 2021 Chicago Prize Competition provided a diverse selection of creative possibilities of a re-imagined space that caters to Chicago’s urban fabric. Their proposals transformed the space into a new civic center with a state-of-the-art materials, newly-introduced functions, and reinforced the relationship between architecture and the environment.

In reviewing the design proposals and selecting these seven finalists, my fellow jurors and I considered how to ‘crack open’ the ground floor of the Thompson Center and make it breathe life into the streets. The strongest proposals show how emphasizing the ground experience and creating a dynamism inside the building can become an attractor that brings a new chemistry to the city. There is such a great opportunity here to reimagine a new type of public space and again showcase Chicago as a global hub for top design. -- Thomas Heatherwick, Founder and Design Director, Heatherwick Studio, Competition Juror

Read on to discover the selected projects along with the description from their architects and designers.

A mixed-use development with a new thermal envelope behind the original curtain wall that is set atop a ground-level remade as a public park within hanging gardens. Each floor is zoned, moving from public at the ground level park to private residences and vegetable gardens nearer the roof.

A new prototype public school focused on public policy and civic engagement for students in Chicago to learn, question, and ignite change.

A hotel in place of offices ringing an indoor waterpark with monumental waterfalls dominating the atrium set in a garden.

Envisions a new sustainable public attraction comprised of auditoriums, art galleries, and community spaces rising within the exterior arc of the current atrium. These new spaces lead to a top-floor urban farm with rooftop green houses that use the existing CTA tracks to distribute the produce from the farm to food deserts around the city.

Creates an authentic new civic and social space linked to cultural groups across the city. Existing floor plates contain support or “back of house” spaces while the volume of the atrium will house performance stages, cinemas, arts galleries, and rehearsal spaces creating strong ties to the diverse arts and civic life of the City of Chicago.

Opens the atrium to the outdoors while wrapping the interior floors above with a façade that becomes a 3D LED matrix able to display images and video. Using the existing elevator banks as a core tube support structure, new floors rise above the existing structure with the familiar step-backs and topped with a conical “spire” also wrapped in 3D LED matrix.

The jury list includes international experts in the architecture and design fields who have designed and restored on museums, civic spaces, and landscape architecture. The jury includes:

In July of this year, the Chicago Architecture Center (CAC) inaugurated its first limited-run exhibition HELMUT JAHN: LIFE + ARCHITECTURE, an architect who "melted and fragmented the mid-century modern grid into post-modern designs" in projects like the United Terminal at O'Hare, the James R. Thompson Center in Chicago, and many others around the world. The event is taking place from July 23rd until October.