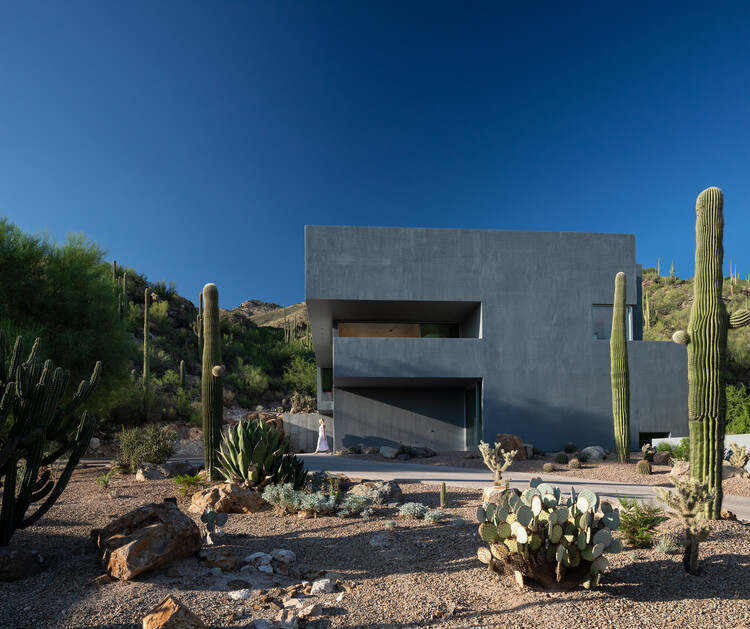 Text description provided by the architects. Nestled at the base of the Catalina mountains adjacent to a protected peak, the Ventana House is a window on the desert. The two-story dwelling rises from its mountainside setting like a geological outcropping, a rugged exterior form shaped from within by openings that afford panoramic views.

Like a geode, the light-filled and refined interior is a contrast and a surprise. The main living spaces of the home are located above the desert floor, connecting the home's inhabitants to a foreground of saguaro forest and the distant horizon.

The entry sequence into the home begins at a notched erosion in the exterior massing. Movement is reoriented up a sculptural stair that occupies a double-height skylighted gallery. The threshold at this moment of vertical ascension is further defined by a bridge that passes overhead. Clad in steel perforated panels, the bridge filters light from above and offers glimpses of experiences to come.

Upon arrival at the main living space of the home, the form of the interior volume adjusts again, marked by a sloped ceiling that echoes the silhouettes of the distant foothills. Clad in alder panels, the ceiling becomes an organizing datum, mapping activities and interactions below: dining, cooking, conversing, and relaxing. Minimally detailed cabinet elements further inform inhabitation, acting as a subtle backdrop to the main feature: daily life in a desert oasis.

The initial conception of the home was shaped during an early visit to the native site with the clients. The picturesque natural character of the site was unmistakable. Less obvious was the opportunity for the prospect, which revealed itself upon us climbing a large mesquite tree to gain access to potential views. It was from this perch that the sequence and organization of the home became clear. The heart of the home as realized - the kitchen - occupies the prospect of the mesquite that we'd climbed together.

The carved exterior form of the home creates deep shadows, protecting the inhabitants from the harsh desert sun. Large sliding doors connect the interior of the home to shaded terraces, facilitating cross ventilation that seasonally minimizes the need for mechanical cooling, enhancing the connection with the natural environment. Material texture and attention to detail complement the bold formal and spatial resolution. On the exterior of the home, combed cement plaster exhibits a trace of the construction process and the hands that contributed to the realization of the design.

The interior of the home reveals itself as a series of discretely carved volumes proportioned in relationship to exterior apertures. The spatial dialog between interior volume and exterior form unfolds in a cinematic montage that complements the picture-window views. The shared experience of the main living space is complemented by private moments for the home's inhabitants, with bedrooms and studies tucked away, each with their own unique aspect ratio, each inviting a personal narrative.

The experiential effect of Ventana House combines picturesque vignettes with cinematic movement, rooted in direct response and connection to the desert landscape and environment. 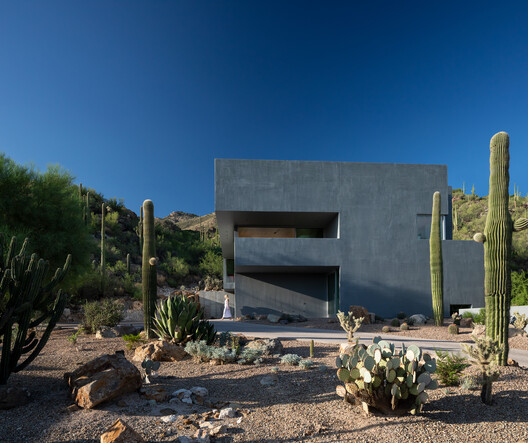