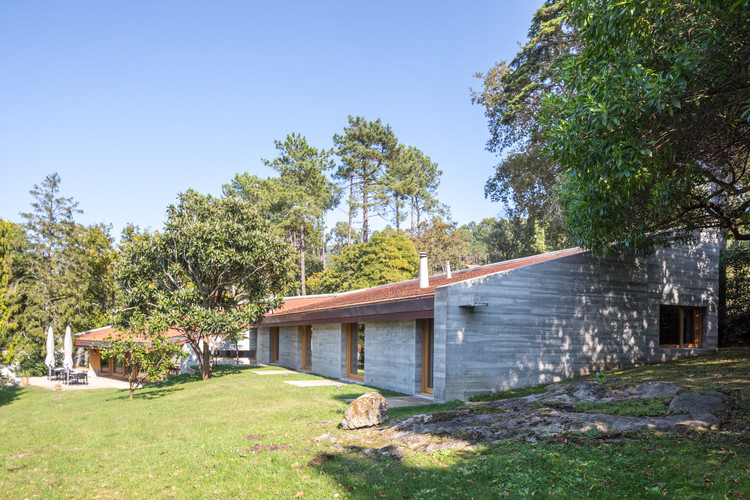 Text description provided by the architects. The Portuguese Sea coast between Viana do Castelo and Galicia is very popular for refuge and summer retreat. This house allows this double use. It is located halfway up a hill near the Atlantic Sea. This means that on the one hand it faces the sea and on the other hand, it profits from a unique plot that kept the natural beauty of the landscape.

The building site presents a rough topography, where a significant group of beautiful autochthonous trees stands out and was intended to preserve and enhance. A set of small traditional buildings and ruins that existed on the site were also incorporated in the proposal as qualifying elements for the exterior spaces surrounding the new house. The architectural qualities of the complex and its surroundings determined the solution, which sought to keep the identified values in the territory, vegetation, and existing constructions. The house is located close to the limits of the property and is partially buried due to the sloping of the land, to emphasize the existing atmosphere.

The construction occupies an area of land that ensured both sun exposure and sea views – adjusting itself to the inflection of an old water line still marked on the site, the existing trees, and the perimeter of the plot. Due to the slope of the terrain, we needed to make a permanent adjustment to the existing levels of the plot, which led to the subdivision of the program in two interconnected volumes.

The precast concrete and the unpainted wooden window frames are intended to enhance the integration of the proposed volumes. The ceramic clay colored tile roof unifies the two volumes that are set on two different levels, some correspondence to the two different functions of living and resting. Living rooms and kitchen are located in the lower level, from where the house is accessed; bedrooms and office are located in the upper level. The landscape arrangements are carried out with the least possible modification of the pre-existing matter and forms. 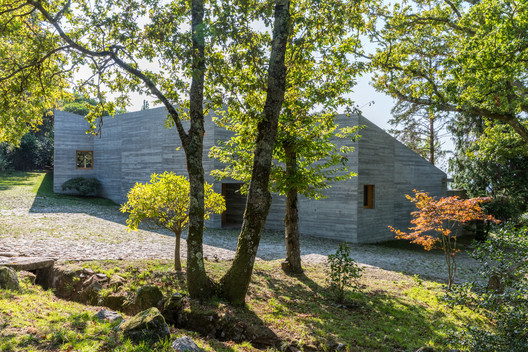