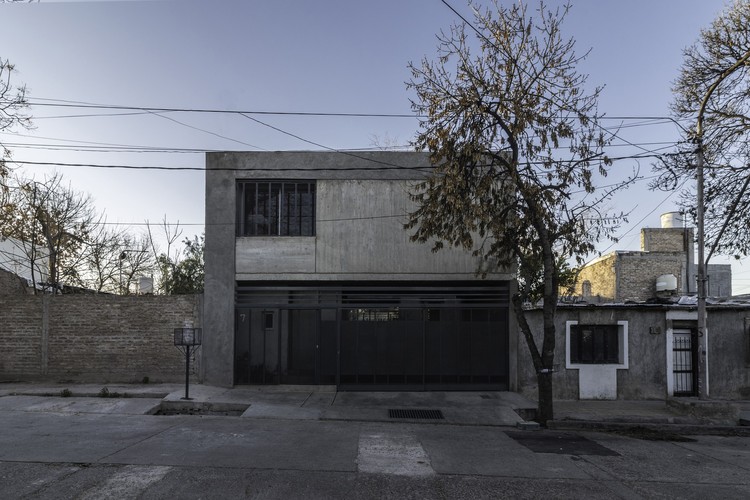 Location. The CAS property is located on a 170m2 small piece of land between dividing walls in the Sixth Section of the Capital City, province of Mendoza, Argentina. The immediate context is characterized by the consolidated urban area of low-rise houses, a large alluvial channel that serves as protection for the summer rainy season and a linear park with luxuriant vegetation, and the new tram rails that connect the city in a north-south way. Although it is a small piece of land, it has its singularity: a double facade consisting of a dead-end passage to the south and a main high-traffic avenue to the north.

Program and Typology. The required necessity program is developed for a unit of cohabitation between two adults and a child. Fulfilling with the requirements of the future users, including a patio as large as possible and the reduced size of the land, the suggestion was a two levels architectural resolution. The ground floor is planned as an open, bright, transparent, and versatile place that gives access to all the rooms quickly and organically. The unified living, eating, and cooking areas with a small gallery are directly connected with the north-facing garden. On the upper floor, the most intimate activities of sleeping and cleanliness are carried out. However, there also is a common, flexible, and dynamic space for all the inhabitants towards the south. This room leads to a terrace that provides northern light and ventilation because of the inner patio that reaches the ground.

Tectonics. The material proposal of the construction project has a unified structure on both levels. The exposed finished reinforced concrete is shown in different areas of the house: as a storage cabinet in the kitchen, as the monolithic first flight of the staircase, and as the blind partition urban facade to protect the privacy of the upper floor on the south. It is also used in the masonry walls uncovered in some places to observe the craftsmanship. Glass is another essential material in this project since it follows the users throughout the house and raises different internal images and perspectives. In the front and rear facades, there is a metal sunshade system of vertical fixed and mobile panels. This technique creates a visual dynamism for the users, and for pedestrian onlookers, and those from the neighboring buildings.

Light. In ONA, natural light is a core concept in our projects, and this particular project makes evident a vital part of our approach. Searching for the best north orientation for the daytime living, cooking, and eating rooms, with the gallery overlooking the garden, is one of the central premises of this work. Moreover, one of the outstanding morphological aspects of the house is the creation of an interior empty space, which gives the place for a patio for lighting and vegetation right in the center of the house. This patio allows the sunshine to enter the private terrace and common areas of the upper floor towards the south of the plot of land. Additionally, on the staircase, there is a skylight strategically located, which provides natural lighting to the innermost point of the house, creating direct sunlight at different times of the day while the users go up and down inside the house, letting them enjoy different atmospheres from the morning to the night.

Living during the process. As in our CJP home project, in this case, a particular situation is present that we would like to highlight in the photography reports of the firm: even though the project is not completed at 100%, it is already inhabited by the users. It's fascinating for us to register and share the images of an occupied house project while it is in its final stage since the date for finishing the missing details is still unknown. However, the already built architecture expresses the essence of the original project. This current situation is more frequent in real life than it might seem, but it is not mirrored frequently in the architectural photographs, where you can only observe the finished, neat projects, which are in many cases empty. Therefore, we bring about the following questions to reconsider: Isn't the original goal of all architectural projects to give shelter to the inhabitants, even if it is not perfectly finished? Why are we used to incorporating perfect, neat architecture without any visual disruption when actually something different happens? Maybe, the more visible the imperfect and real architectural projects are in word-wide publications, the more highlighted might be that what matters is the happiness of the inhabitants, enjoying their desires becoming built and interpreted throughout the ideas of an architect.