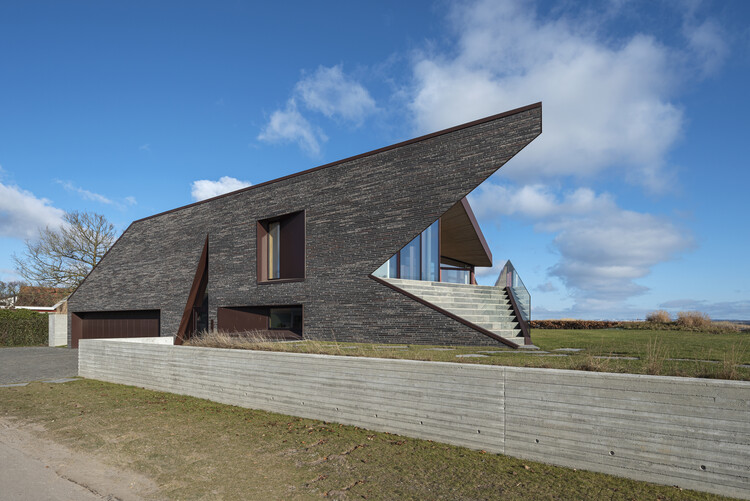 Text description provided by the architects. Danish architecture studio CEBRA has completed a seaside villa in Denmark wrapped in an undulating roof, offering expansive views over the Aarhus Bay while also sheltering itself from the weather. Responding to the specific site conditions and the client’s wish for an artistic expression, the residence is designed as an inhabitable sculpture that takes on a different shape depending on your point of view and the capricious coastal weather.

The villa was developed for a site on the edge of a residential area, located only a stone’s throw from one of Aarhus’ most popular beaches and offering magnificent views over the water and the hilly Mols peninsulas on the opposite side of the bay. The aim of the design is to stage and utilize this location and life by the sea with the vast horizon as an everchanging backdrop for strolls along the beach, winter swimming, watersports, and everyday activities.

The interior is divided into two overall functional sections, each occupying one level of the two-storey residence. The lower level contains ancillary functions such as storage, technical and utility rooms as well the main entrance and the garage. Upon entering the villa, a circular opening to the garage frames views to the car enthusiast owner’s collection of vehicles, greeting visitors as a display of drivable sculptures.

From this base, a staircase leads up to the plateau of primary living spaces and directly into the heart of the residence; a large, elevated space that connects to roofed outdoor areas facing north and south. This central space contains the kitchen-dining area and living room, which are flanked by two enclosed private wings oriented towards the access road to the west and the neighbouring villa to the east, respectively. In between these two wings, the central living space provides privacy and shelter from the omnipresent coastal winds while at the same time granting unobstructed views to the sea and the courtyard through the floor-to-ceiling glass facades.

The upper floor plan layout is a response to the typical dilemma accompanying seaside plots – balancing the wish for openness to maximize views with the desired level for privacy. Each of the two flanking wings forms an enclosed unit, shielding both the private areas within and the central space in between. The western unit is laid out as a guest or children’s wing with one bedroom and adjoining bathroom, whereas the eastern wing contains the master bedroom, dressing room, and bathroom with direct access to the outside.

The roof is the villa’s most distinctive and spatially defining element. It almost glides over the central living space while tightly wrapping down the sides to anchor the villa on the plot. It not only covers the indoor areas but protrudes to the north and south to create sheltering eaves. The eaves reduce the thermal stress on the central space’s glass facades and create generous roofed outdoor areas protected from the elements.

To create a varying spatial experience and to subdivide the large living space into zones of different ceiling heights, the roof undulates along contrapuntal lines. The resulting curved planes and stringent arches create a sculptural and vivid signature for the villa, continuously changing the appearance of the building as you move around it.

The residence is characterized by two contrasting material palettes, defining the exterior and interior, respectively. On the outside, the facades of the wings consist of a unique colour-mix of classic Danish Kolumba bricks. As a reference to the beach, the sand remaining from the manufacturing process has been preserved on the bricks, giving the facades a tactile surface quality. The brick facades form a robust and weatherproof shell around the light and transparent heart of the residence as a modern interpretation of one of Denmark’s oldest and most prevalent building materials. The shape of the villa is unique and expressive yet built with traditional and natural materials.

Contrasting the dark red-brown colours of the exterior, the interior finishes create a light and welcoming atmosphere with warm wooden details, most distinctively on the undulating roof’s underside. All floors, both inside and outside, are covered with Norwegian slate that creates coherence throughout the different spaces and harmonizes with both the interior and exterior colour palettes.