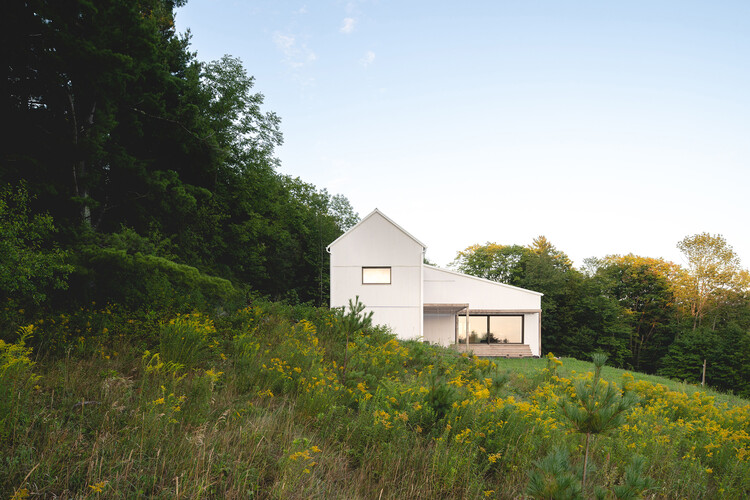 Text description provided by the architects. Passive House and LEED Platinum-certified the Saltbox House is only the third certified passive building in Quebec. Built on the south side of Mont Gale in Bromont, the single-family house sits in a meadow, on the edge of the forest. With its "L" shaped plan combining two types of roof slopes, the house borrows its vernacular silhouette from the architectural vocabulary of 17th-century Saltbox-type rural buildings, still clearly visible in the Eastern Townships countryside.

The high-performance house, built with a double frame and south-facing orientation, offers exceptional living comfort to its inhabitants, whatever the season. The Saltbox Passive House is a primary residence designed for a family of four and built on the south side of Mount Gale in Bromont, in Quebec’s Eastern Townships. The 3,100 sq.ft. single-family home, built on three levels, is set in a meadow on the edge of the protected forest area of 2.5 acres of land.

The natural character of the site and the built heritage of the region led to a historic architectural language. With its "L" shaped layout, as well as the combination of two types of roof slopes, the house borrows its silhouette from the vocabulary of rural Saltbox buildings, which appeared in the New England colonies in the mid-17th century and are still prominent in the Eastern Townships countryside. With its gable roof on the main section and a single-pitch roof on the lower section, this typology takes its name from boxes with lids in which salt was once kept on top of the fireplace, away from moisture.

The house plan is south-facing to promote passive solar heating and panoramic views of the valley. The three-story tiered construction, carved into the mountain, minimizes the retaining walls visible from the road. By building carving in the rear of the house and opting for a roof slope that follows that of the land, the house adapts gently to the topography of the site. Its presence remains discreet from the street, revealing its true program only to visitors who take the path to the entrance of the house. The third level with the garage that also serves as a workshop is only visible on the final approach.

Energy efficiency, comfort, and durability principles have guided the design and the team of professionals. Design choices such as a highly insulated and airtight envelope, superior heat recovery from the mechanical ventilation system, and a building orientation and apertures design that maximizes solar radiation are not directly visible in the architecture but are essential to promote in the context of climate change.

Design decisions were validated by energy modeling of the building, which informed the choice of double framing for the insulation of the above-ground walls and the choice of passive triple glazed windows. In addition to the PH standard, we also significantly reduced the carbon footprint of the building by carefully choosing materials, such as wood siding and cellulose thermal insulation. Therefore, the Saltbox Passive House demonstrates that it is possible to build ambitious designs with high energy standards at a reasonable budget.