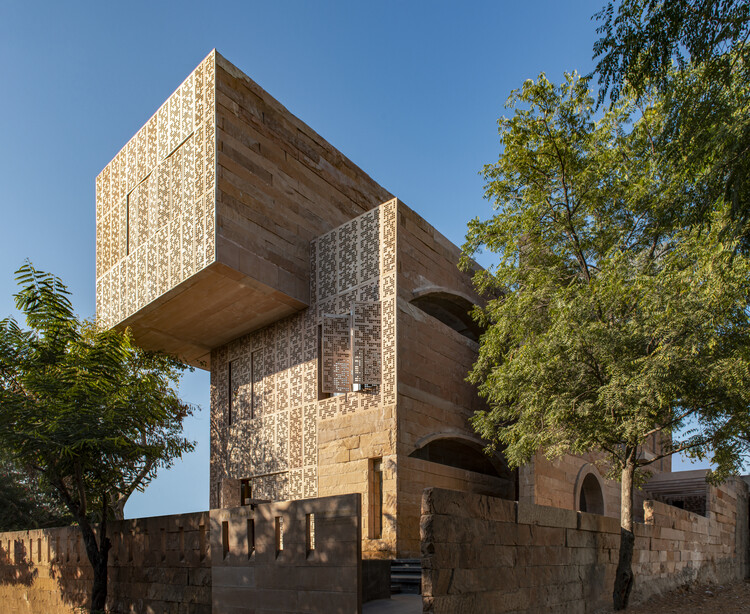 Text description provided by the architects. Rajasthan is synonymous with sandstone as a building material but sadly, over the last few decades, this material has been reduced to a 'cladding 'medium and its potential as a robust and sustainable structural element has not been explored. The house in Jaipur presented us with an opportunity to explore and evolve a method of building that has been prevalent in traditional buildings for centuries. We laid out a simple brief: no material other than stone should be used for construction.

The traditional method of load-bearing construction relied on the impermeable thickness of walls. This was reengineered to develop a hollow interlocking structural wall system that creates a more effective thermal break, provides space to integrate services within the wall cavity, and effectively reduces the material consumption by 30%. Floor systems alternate between vaults and large single-span stone pieces. Every building element from the basement raft/retaining walls/lintels/door and window jambs/reveals/stairs/screens etc has been made from stone blocks, either from the quarry ( superstructure elements) or excavated from the site ( substructure elements).

The house is arranged around a narrow courtyard that extends into even narrower slits and fissures as it weaves its way through the house, essentially drawing on the proportions of voids and interstitial spaces of traditional dwellings as a method to counter the effect of the harsh summer sun. Large front and rear-facing glazing are shaded by deep overhangs and operable, hand-cut stone screens to modulate light, privacy, and views.

QUARRY:  Hard sandstone ( Jodhpur stone) is quarried 45mins away from the site. At our request, the quarry foreman reverted to the “ splitting” stone technique using traditional stonemasonry tools instead of the high-yield gangsaw extraction that is machine intensive and eliminates the natural stone grain. Splitting the stone mobilizes the human touch, limits the processing, and retains the natural Earth imprint of the stone.

CRAFT + ENGINEERING: Stonemasons from the surrounding villages have worked stone with their hands for generations. The accumulated knowledge of the past along with the theory of Engineering created an interesting and often contradictory overlap of intelligence that was most often resolved by the Head Stonemason, including identifying the optimal size of stone that could be carried and laid by 2 masons with minimal mechanical assistance ( unlike brick, there is no Standard stone size).

The purview of Craft, often limited to embellishment, artifice, and object, was expanded to the building scale.  Easily consumable symbology is supplanted by the primal and essential deployment of material resources and craft in a space that is both Ancient and Contemporary.

Thermal Performance: Approximately 5-7*C variation can be observed between the exterior and interior. This is due to the thermal mass of the material and the “cavity” construction.

Dry Stone Construction:  A minimal amount of steel such as tie-rods and shear pins reinforce the stone for seismic performance. Lime mortar is used only to seal the exterior joints. 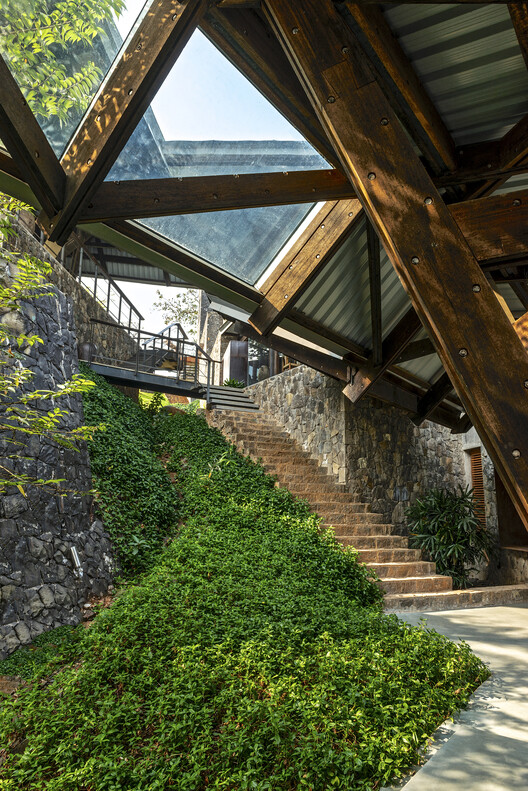 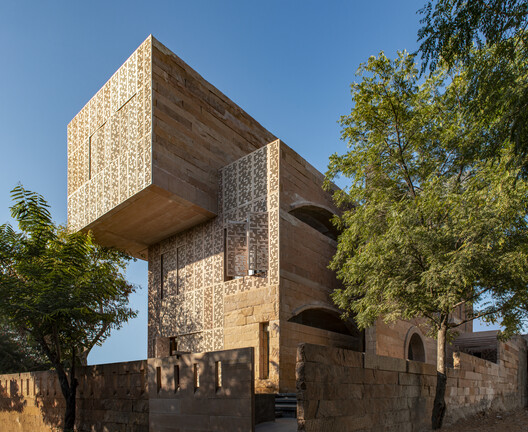