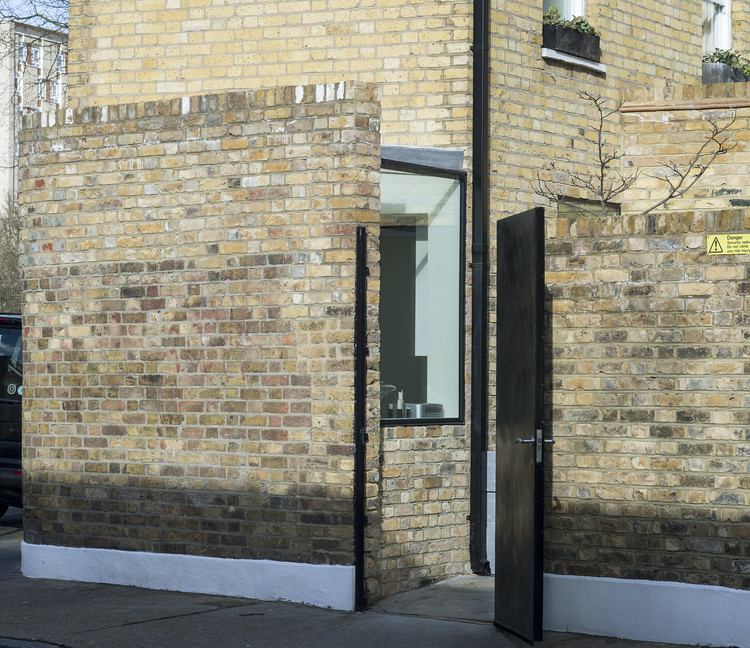 Text description provided by the architects. This was a very special project from the Start…D*Haus was invited to tender for an ambitious ground floor rear extension, the Clients brief was clear – to maximise space and light, opening up the entire rear facade but at the same time keeping an outdoor courtyard space.

Set within the backdrop of the world-famous Columbia Road flower market. The flower market began as a Saturday trading market. It was moved to Sunday, by Act of Parliament, in order to accommodate the needs of local Jewish traders. The context of the street could be 1817 rather than 2017 as the facade and Victorian brick architectural grain is more or less unblemished apart from the flowers and colourful street art and characters that roam the streets in and around the site in question.

The Construction was complex and complicated fraught with stressful obstacles to overcome but with an extremely hands-on and understanding client, we got past the finish line and delivered one of the most satisfying projects we have ever worked on. One huge problem encountered when the contractor started on site was the opening up works on the ground floor. We discovered there was a giant bakery oven nearly the size of the whole yard, which was structurally unsafe. Together with the contractor and the Structural engineers, we solved this with a large steel-reinforced concrete slab.

As architects, we not only look to maximises space and light but also protect and enhance potential return in property value. The inspiration from where the design starts is the curved garden brick wall that was used for an old bike store and barbeque area. By knocking through the rear wall and taking the floor space all the way to the extent of the site, we maximised the floor area. We then evened out the datum so that the entire ground floor was on one level which enhances the feeling of space. We did this with a beautiful patterned polished concrete floor that meanders from the kitchen living room all the way to the external courtyard, this creates a blurred sense of what’s inside and out, so in fairer weather, there is not two rooms but one large one.

The next large wall to go was the existing kitchen wall with its small sash windows that kept the existing room in near darkness, opening this up with a large steel beam meant we were able to accommodate a dining table for 8 people framed under a giant skylight above one’s head and a giant steel pivot door that is even bigger, to access the courtyard.

These tectonic openings in the mass play and react with one and another and let the sun stream in. The kitchen flows fluidly around the space and is framed under a host of amazing frameless self-cleaning glazing that gives the feeling of a double-height volume under a blue sky. 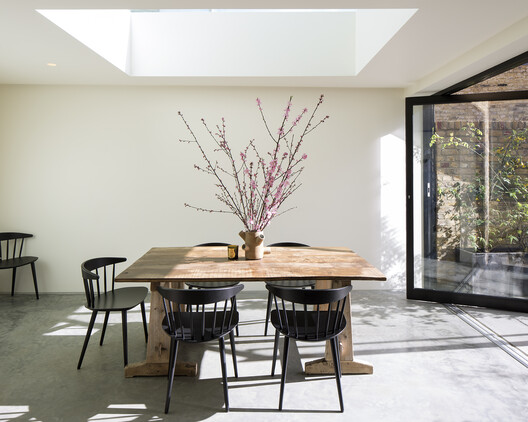 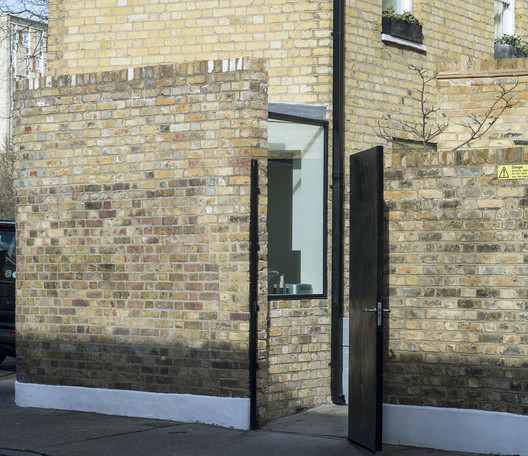