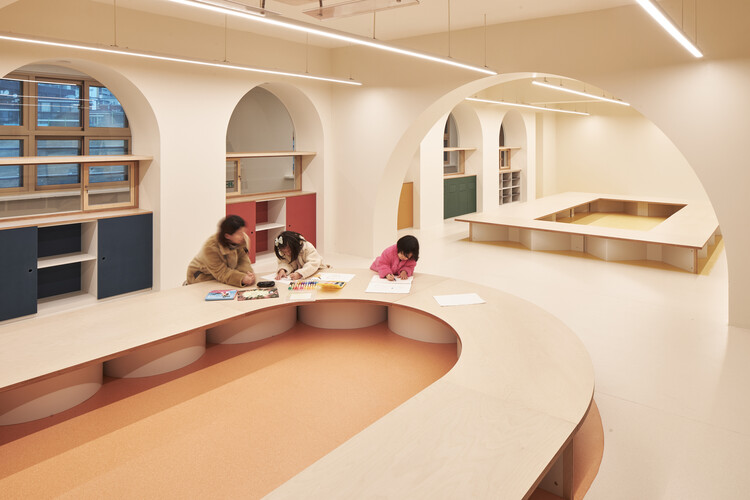 Text description provided by the architects. Play, Learn and Make - It was a project to refurbish three empty classrooms located side by side to use as a makerspace and equipment room for students. The flooring and the lighting in the classroom were deteriorated and needed to be replaced. Although the windows of the classrooms were facing south, the lighting environment was not favorable because it was hindered by the mountains. In addition, the hallways in front of the classrooms were a mixture of shoe racks, sinks, and freight elevators, so the area needs to be improved as educational spaces for students. The basic requirements requested by the school in creating a makerspace were as follows. - To extend the functionality of the makerspace to the hallway space. - For the safety of learning activities, to have space where teachers can easily observe and control. - Possible to use the existing three classrooms separately as a makerspace and equipment room.

We thought that the most fundamental goal of the makerspace should be to create a place where students could stimulate their creative thinking and allow them to do a variety of activities. The Seoul Metropolitan Office of Education and Sungwon Elementary School went through a process of coordinating design brief while visiting the previously completed makerspaces one by one before selecting an architect to take charge of the design. We concentrated on the design idea that too much equipment or tools occupying space could limit the activity space where children can freely express their creativity. The most important spatial element in the makerspace of the Sungwon Elementary School is the tables. Besides equipment and materials to support the activities of the students, we thought that tables where children can work together (or alone) comfortably should be the center of the space.

Gathering tables - It was intended to form the center of the makerspace by designing two large tables where up to 15 people can gather and work at the same time. The two tables were designed with the theme of round and square to have distinct geometries. Considering the scale that elementary school students can work comfortably, instead of placing chairs, they sit on the floor and move freely. The tables have an inside and an outside space and are designed to be used separately during training or production activities. The structure supporting the table has distinct morphological characteristics, in which small geometric units are connected to form the structural frame. This has the effect of naturally delimiting the individual workspace area when students sit down.

Separate tables - By the window of the makerspace, space was planned for students to work individually. It was designed with the imagination of children growing up, spending time alone under the sunlight coming in from the south window. Replacing windows or installing individual wall-mounted work lights was not realized due to the constraint of construction cost, but I think a calm individual table, different from the bustling of group tables, will be good enough to be an intensive workspace.

A continuous room created by arches - The wall separating three consecutive classrooms was demolished to create one large room. Due to the nature of remodeling, it is difficult to change the ceiling height or move the outer wall, so there were many restrictions on creating a new space within the existing school space structure. In an attempt to overcome these restrictions, an arch-shaped boundary was created utilizing parts of the existing walls to create an open makerspace, and children can move through the arches. Next to the individual tables, a small arched opening in an inverted form was created to visually connect them.

Hallway exhibition wall - Makerspaces are where learning and making happen simultaneously. In addition, it is important to allow students to share their productions. The wall separating the hallway and the makerspace is designed to be an excellent exhibition space in itself, with a display stand for children's works, appropriate display lighting, and storage boxes integrated with the wall. It was expected that children could naturally observe and communicate what is happening in the classroom as they pass by. The essence of makerspaces is to learn, create, and share. We wanted to achieve minimal intervention using walls and furniture in the limited budget and physical conditions of the Sungwon Makerspace project to maximize the possibilities of these three essential actions. 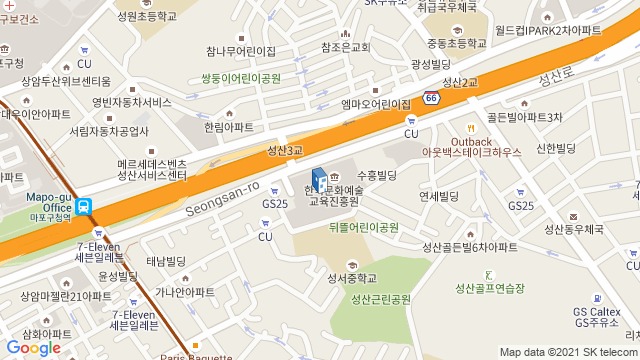