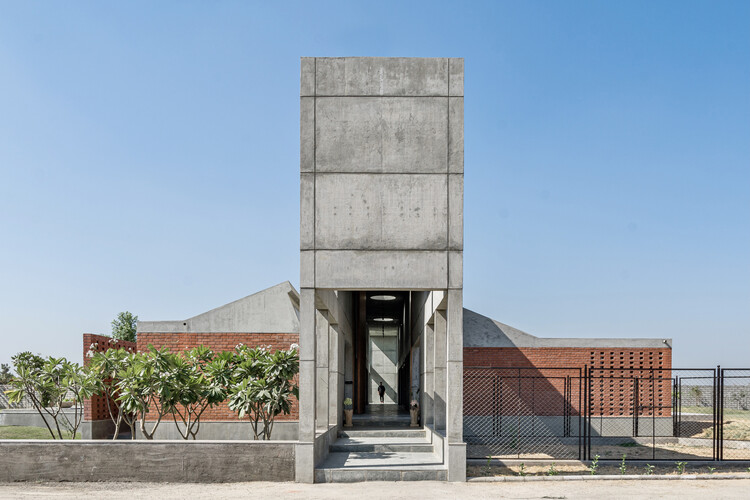 In-Betweenness of the Built and the Unbuilt.

“Out beyond ideas of wrongdoing and right-doing, there is a field. I'll meet you there.” Rumi.

Where is this field of ours? How do you envisage this field? How do you create an “in-between” space? The Indian mythological story about Hiranyakashipu talks about this in-between concept in a metaphorical way. The story is about a demon who could not be killed via a complete or absolute form (man/beast, devil/god, day/night, indoors / outdoors, earth/sky and so on). This context creates a fundamental question in one’s head – if not absolute, is there something that lies ‘in-between’, something which imbibes a bit of both – and more importantly, something that can be considered a form in itself?

The Two Bay House is the manifestation of this very concept. Neither inside, nor outside, neither solid, nor void, neither public nor private, neither complete nor incomplete – rather a threshold between these. The in-between space is the central element of this house – and the entire planning revolves - around this. To empower this element, the corridor is given an identity – a larger-than-life scale. As you enter the corridor, you notice the double-height space that defines the language and aesthetic of this place. The corridor is intentionally bound in a certain geometry that lets you access the two bays on either side – but still maintains its own character.

The three punctures on the roof create the play of light and shadow – the entry point is actually a calculated placement to create a natural spotlight as one enters through the monumental threshold. The water channels on either side along the corridor are replenished by rains, during monsoons – again an intentional in-betweenness of the natural and the built. These water channels are the buffers between the corridor and the other spaces – living, dining, and kitchen in the left bay; and rooms and swimming pool in the right bay. The access to these bays is like a bridge over these water channels. During festivities, the user personalizes this space by placing oil lamps and flowers on the water surface. This space – the corridor – is the building’s soul.

As we move along the place, the journey unfolds. There are courtyards that open up, the bedrooms lead to the attached garden (backyard), and the living/dining/kitchen come across as a single continuous space with supporting elements that make it efficient yet completely consolidated and accessible. The large openings of the living act like a large screen, leading to the amphitheater. This extended plinth-level terrace is again the transition between the public and the private spaces – literally setting a stage for the expansive green lawns and the unbuilt thereon.

The landscape along the driveway is a natural barrier, and thus, keeps this enormous green space a mystery till one reaches the vantage point. By design, the built footprint is only about 5% of the entire land parcel. This house is the field we were looking for. 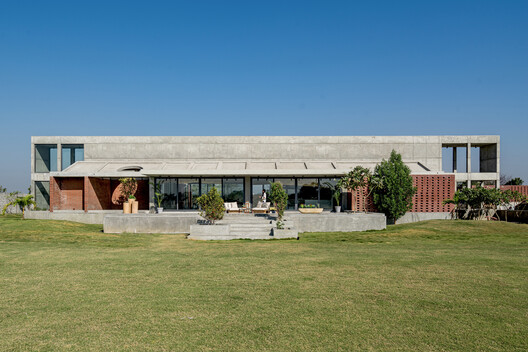 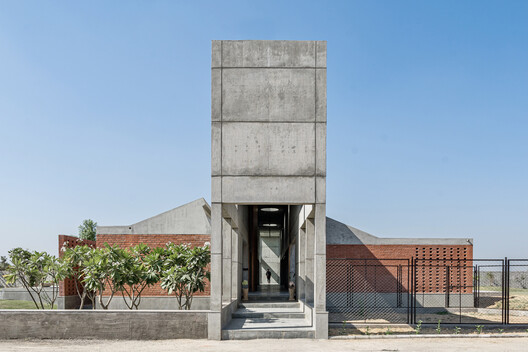