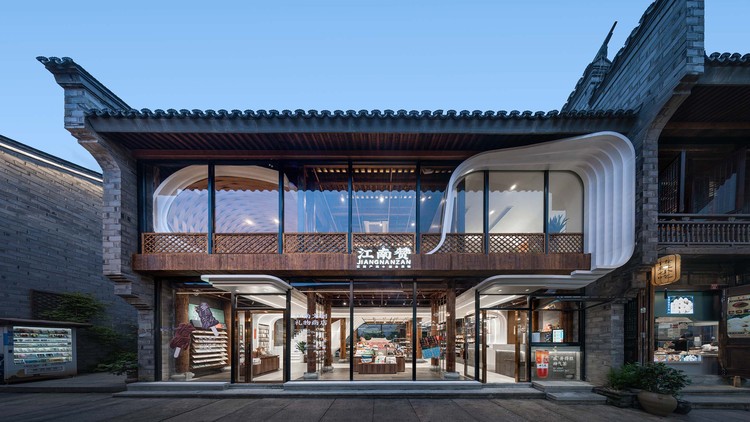 Text description provided by the architects. Recently, a new store called Jiangnan Zan has stated up in Ziyang Street. With the integration of architecture, interior and FF&E design by LYCS Architecture, Jiangnan Zan, a retail store transformed from an old modest house of about 200㎡, become the first fruit of a new cultural tourism IP program called “Picturesque and Poetic Jiangnan”. It is a joint venture of Ancient Village Protection and Utilization Fund of Zhejiang Province and HXS Cultures known as one of the significant driving forces of Beijing Palace Museum Culture & Innovation.

Ziyang Street used to be the main commercial zone of Linhai. Still retaining the ancient urban pattern of Tang and Song Dynasties, it has many notable century-old shops until now. However, in terms of its severe narrowness for traffic and the pre-modern and seemingly boring style of the ancient buildings, this old street, surrounded by and in contrast to the flashy and bright modern city, has been increasingly unattractive, declining and even weird in the eyes of the public. In 2014, an article named Yongzheng : I Feel Myself Lovely went viral on the Internet in China. By virtue of depicting the ancient history in a modern and fashionable way, this new pattern of “Cultural IP + Popular elements” remarkably revitalized the old Forbidden City with a long history of more than 600 years, and thus became popular among the young, giving a rise to an incredible huge wave of new cultural and creative industries across the country. The phenomenon deeply inspired and encouraged the design team.

Proposing the special concept of new rising “Wave” symbolizing the young generation, the design team has subtly placed the element of abstract wave in the old house. By contrasting the new and the old sharply, it has created a wonderful surreal art scene, expressed a marvelously intrepid and free attitude of the contemporary young riding the wave, and thus effectively set up a diverse and vast space full of fun. At the same time, the distinct design concept of “Wave” finely echoes the real surging tide in the Lingjiang River outside Linhai city, on account of which the ancient city wall with the additional and reliable flood-control function can astonishingly survive and even be well preserved in the densely populated area after a thousand years.

The design concept of “Wave” also contains the design team’s creative exploration into modern retail building. In order to solve the problem of maximizing the use of space under the heavy pressure of expensive rent which has always haunted the entire retail industry, the team has used the element of wave to blur the frozen boundaries of walls, floors, floors and roofs, break down the conventional concept of layers, and reconstruct the given spatial system. By ably transforming the original two-level space into a new continuous whole, this design has brought in a unique and exciting experience like surfing in midst of the huge waves, contributing to forming a kind of immersive shopping experience.

By means of thoroughly dismantling the jumbled and redundant walls and simply exposing the original wood structure and wall materials, the design team has placed a continuous white curved surface, which like a leaping wave, between the beams and the columns, and thus hidden inside the surface the equipment pipelines, the electrical lines, etc., so that the sight can be much clearer, purer and simpler without any confusion. With the help of cascade design, the edge of the curved surface has significantly weakened the sense of volume and enhanced the sense of speed. Set up subtly along the whole edge, the linear lights illuminate the huge wave and the wood pillars, perfectly forming a strong visual collision. As the new seems more dazzling and the old more meaningful, this visual effect turns to be more refreshing as if a dreamy spatio-temporal collision has happened.

Hoping for the “wave” to continually surge down into the ground, the design team has finally chosen the durable terrazzo to constitute a closed loop after numerous experiments with the various kinds of metals and paints. The white element naturally divides the retail store into eight different exhibition areas, each of which highlights its unique feature perfectly. In terms of the exhibition design of these eight areas, the team has carried out an integrated design based on the concept of Wave. By adopting the metal and the wood veneering materials, LYCS team, in order to meet the unique needs of the retail store for holding a wide variety of goods and achieving seasonal renewal, has created lots of significant variable components such as the diaphragms that can be adjusted up and down, the brackets that can be freely arranged and the flexible and mobile cavern boards.

Stepping from the first floor to the second floor, the spatial experience will be changed accordingly from walking under the wave to riding the wave. The design team has already ably set up a perfect place for visitors to take photos at the transition point of space, which leads the streamline naturally up to the cozy teahouse on the second floor. Decidedly replacing all the doors and windows along the street with the large floor-to-ceiling ones and the black stainless steel frames, the design team has remarkably made the originally dark and narrow space become bright and transparent, and contributed to the huge “wave” pouring out from the second floor, as if infusing a modern vital pneuma into the old street. The whole design has already resulted in its significant distinction from other stores.

Jiangnan Zan is now open for business. By virtue of exploring the historical stories of Ziyang Street, its operation team has designed and developed two product series “Qi Kai De Sheng” and “Zi Yang Zhen Ren”, contributing to the retrieval and re-spread of the reputation of the national hero Qi Jiguang of Ming Dynasty and the great Daoist Zi Yang Zhen Ren of Song Dynasty in this historic city. In addition, as the new rising “wave” of the old city, Jiangnan Zan designed by LYCS Architecture plays the key role of the new booster and “microphone” of the new cultural and creative industries, taking the young back and bringing a new vigor to Ziyang old street. 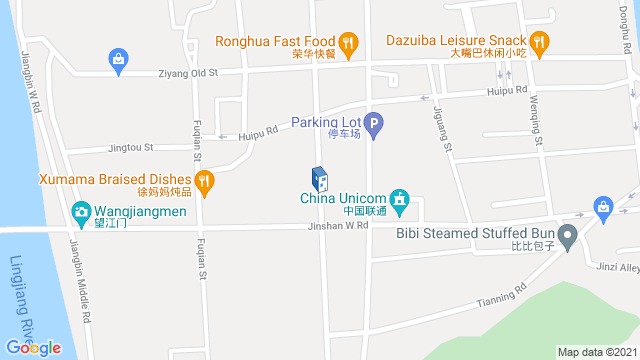 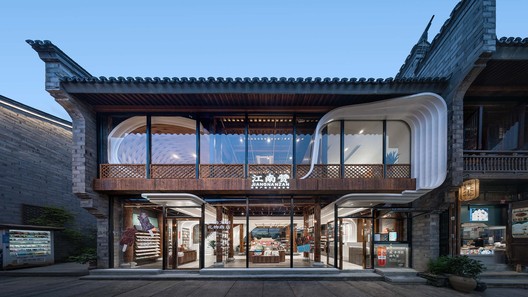