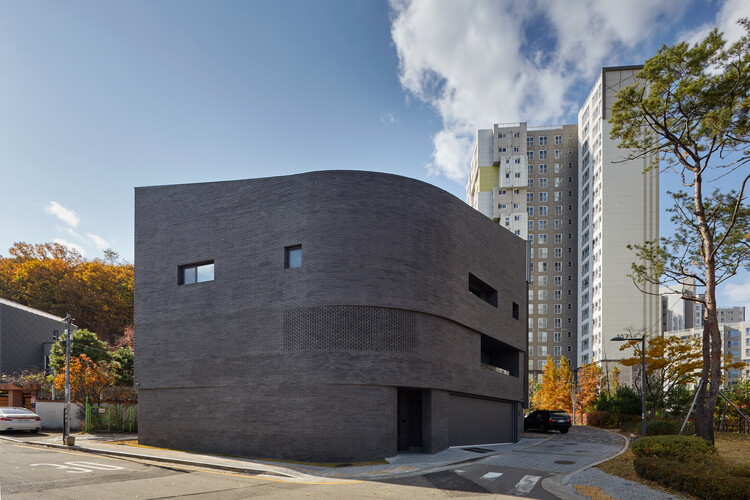 Singleness in an open site - Naegok-dong House (N House) is one of the few single-family housing sites that belong to public housing district developed by SEOUL LAND & HOUSING CORPORATION (SH). The site overlooking a large-scale apartment complex, where the road to the village and the road leading to the entrance of the large-scale apartment complex meet, is too public for a single-family house to be located in an urban context. Securing the singleness of a single-family home under these site conditions became a critical starting point for this project.

A yard of a single-family house has the most direct contact with the outside. In this project, the yard is located in the site’s center, making the house the least interfered from the outside and surrounded by the inner space. Therefore, the interior of the house and the exterior of the city are separated. The city’s north side is closed with achromatic black bricks, thereby adding another background to the town. The simple massed of form and finish are horizontally segmented along with the flow of surrounding buildings not to give any visual disconnection in the city.

A set of spaces containing actions - The family in N House wanted to build the “last house” to spend a lot of time and share their lives. Home activities increase in proportion to the amount of time spent at home. In the existing house, the spatial layout divided into necessary functions such as the living room, bedroom, and the kitchen is subdivided into a functional space used by all family members and an action-oriented space considering each member’s taste. Even in the inside of the house, namely a private area, the character of the space covers from the most public space for guests to the place that considers each family member’s taste.

Since action-oriented space planning has no advantage in the usability of each space, physical environment such as lighting and ventilation should be provided uniformly. So all private activities are arranged vertically around the courtyard to get proper light and wind through spaces. The large window on the south side serves as a device for lighting and a medium connecting space and another space of an urban vertical single-family house that should be separated vertically.

Depth and density of opening and closing - The closed faces are selectively opened with varying depth and density. The north wall has different thicknesses to vary the depth of windows depending on the internal use. The window of the living room containing the pine forest opens to the deepest and most expansive. A large window in a private area actively allows light with a shallow understanding of depth The shape of the stairs connecting each floor could gradually open and close according to the direction of going up and down the stairs. This brick stacking makes the elevation where it is wide open inside to receive light and at the same time, it is closed outside to avoid the gaze. 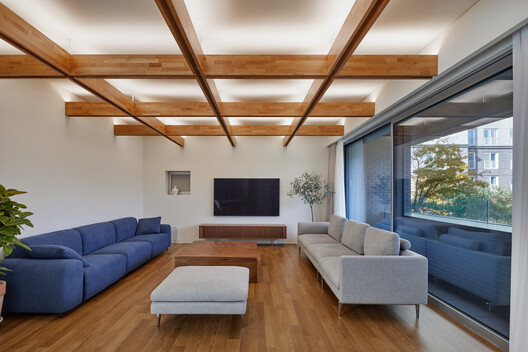 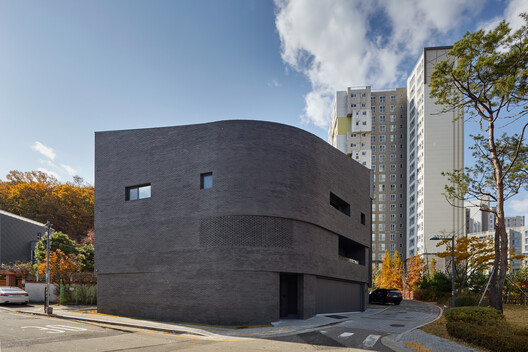