Save
House in Ocuilan / Palma 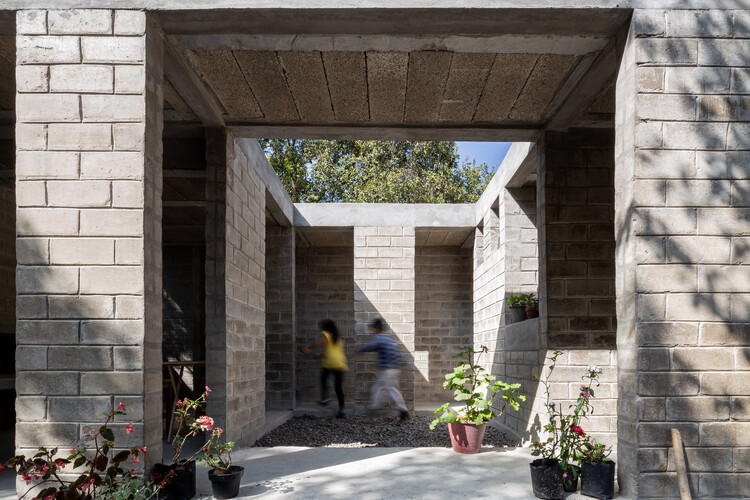 Text description provided by the architects. Since the 2017 earthquake that struck central Mexico, initiatives such as Reconstruir México emerged, the objective was to achieve a conscious and effective reconstruction of the affected areas. For this, 50 architectural firms were summoned, which would be in charge of working with families in vulnerable situations. The project funded by #LoveArmyMéxico and with the support of different institutions such as Fundación Origen, ¡Échale! a tu Casa, Fideicomiso Fuerza México and PienZa Sostenible would deliver a house to each of the affected families.

At the beginning of the process, the teams visited the assigned families to get to know them and find out the specific needs of each of the family members. In our case, the project would be for Axel, an 8-year-old boy who lived with his grandparents.

The site is a plot owned by Axel’s grandparents, where not only they lived, but also the entire families of his other two daughters. The house for Axel would be built at the rear of the lot, which has a considerable height difference from the front, where the 3 families currently live.

Axel’s grandmother, whose daily work consists of cleaning cactus spines, asked us to have some outdoor space that was directly related to the kitchen. Another requirement was to incorporate a third bedroom to accommodate another family member in case of need.

Seeking to maintain a reduced budget, the houses had to be built with the same block donated by the organizations with a 45m2 footage.

To give a feeling of spaciousness to the reduced space, the project is configured by a series of independent walls that, by framing certain visuals along the daily route, provide a depth that goes beyond the built limits. Although the floor plan of the house is simple, a square of 7 meters per side with a small central patio, the use of the aforementioned walls helps to avoid a simple and direct reading of the interior space, giving a surprise character to the proposal.

The 3 bedrooms are arranged at the back of the house and face the lusher side of the plot, while the kitchen and the small central patio, which serves as a workspace for Axel’s grandmother, are placed in front of the project and get privileged views.