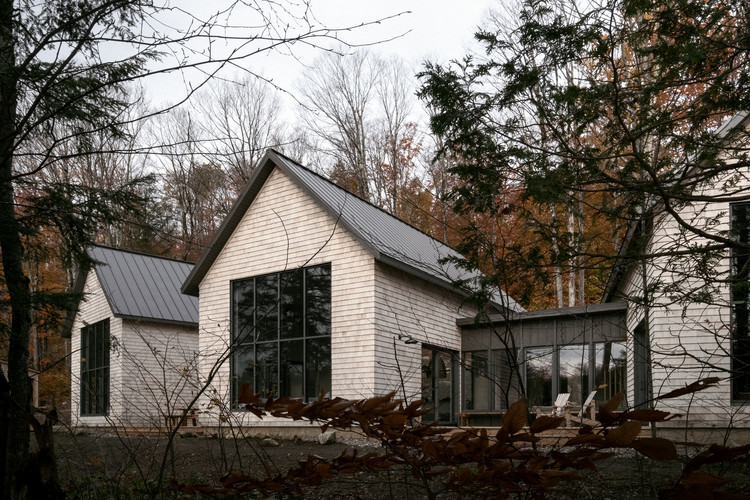 Text description provided by the architects. Made up of three interconnected houses, Les Voisines proposes a novel living and rental space that reinvents the boundaries between shared and private space. An invitation to experience the rental home of the future. Located in Austin in the Eastern Townships, the project is a collaboration with the client, Lysanne Pépin of the Maison Pépin boutique, who designed the interior while APPAREIL signed the architectural envelope, which balances tradition and modernity.

Large spaces and sub-spaces for multiple purposes. The client wished to build three distinct but interconnected homes. The westernmost house is inhabited by the clients. Thanks to its bedroom, rest area, bathroom, and independent kitchen, it can be completely closed off to the two other homes. The largest home, in the east, was designed to be rented and can host up to two families, with three rooms and a dormitory on the second floor. Nestled between the other two, the third home hosts a shared space with a kitchen, dining area, and living room.

A long passage cuts across the three residences and cleaves each building in two, creating sub-spaces within and between the homes. The southern spaces on this line are the shared living spaces that give onto the lake, while the northern spaces are reserved for the rooms.

In the protected hall that links the homes, storage spaces have been placed on the northern side, closing off the view from the road, while the southern side is open to the lake and lets in abundant light. The glass passage that crosses through the homes punctuates the path with its mullions and changing light display, creating an invitation to wander and a space conducive to contemplation and communion with nature.

The brick hall’s materiality stands in contrast to the wooden floors, acting both as a distinguishing element and as a unifier between the three houses. The brick’s urban materiality toys with notions of interior and exterior, as do the furnishings and the openings that foster a connection with the lake and blur the limits between the inside and the outside, giving people inside the home the impression of having both feet in the water.

A respectful architecture for an intact nature. The trio of cottage’s fan-like slope offers different angles and viewpoints onto the lake and the surrounding nature. T\\he base of the terrace’s coating fosters a direct connection with the earth. The two small terraces, facing south and nestled between the homes, are protected by the wind, creating a microclimate that encourages the space to be used a little later into the season.

Mindful of respecting the territory and the environment, APPAREIL Architecture sought to maintain the site by preserving its natural state as much as possible, adding only indigenous pieces to the furnishings.

A traditional shape, contemporary materials. Drawing inspiration from the cottage’s traditional architecture, APPAREIL proposes a contemporary reinterpretation. Les Voisines, with its gabled roof, adopts a slope conducive to Quebecois winters. The cedar exterior coating is local and durable for a timeless style. The openings draw upon the language of the traditional home while proposing a modernized version with oversized windows. The short roof overhangs contribute to the cottage’s more contemporary aesthetic.

A Nordic approach inspired by our traditions is the creation’s guiding line. This audacious and distinctive project, as much in its layout as in its construction details, is borne out of an out-of-the-ordinary partnership. 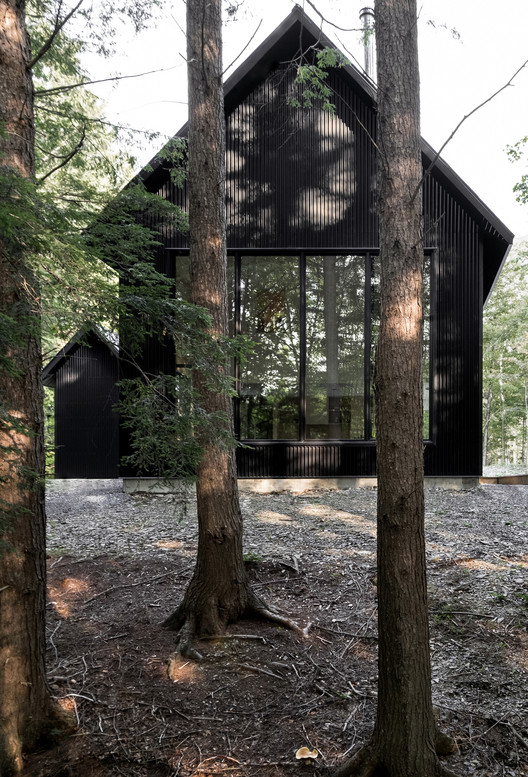