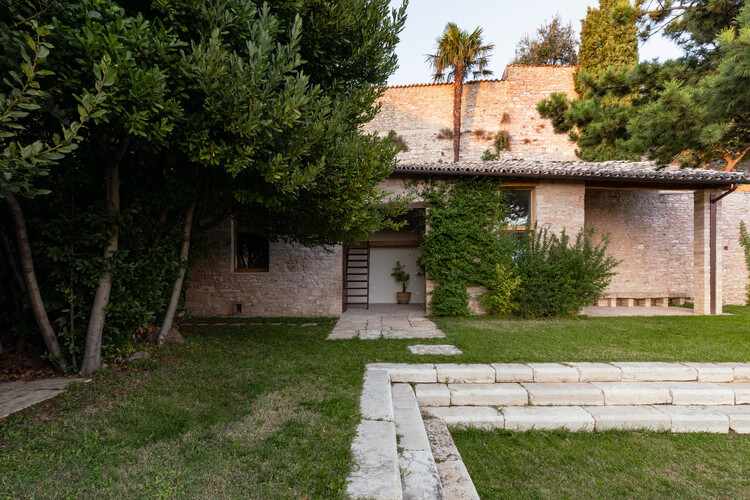 Text description provided by the architects. The house is located in the upper part of the historic center of Assisi. It appears embedded in the building fabric, which stretches parallel to one of the main streets of the city and opens up towards the south, overlooking the lower part of town and the valley below. On the southern front, there is the sole entrance to the property, while at the back of the building towards the north, there is the garden organized on terraces, that model the strong sloping characteristic of the area.

Ancient stone retaining walls define the limits of the garden, whose main terracing is located at a height of more than eight meters above the entrance to the house. The building had been in a deep state of decay and was strongly compromised by many interventions of poor quality. It had several rooms were insufficiently lit. The project provided an opportunity to reconfigure both the internal spaces, distributed on four levels, and external ones and to create a new rapport between the house and the garden, which had previously been absent.

From the entrance hall, a new pathway illuminated by natural light, effortlessly disguises the existing height differences and offers views of singular beauty, creating a totally new experience. Natural light, modulated differently, greatly enriches the quality of all the spaces and penetrates deep into the rooms located on the ground floor.

The heart of the house is represented by a space that, extending both vertically and in depth, unites the first and second levels. A space that leads the eye towards the garden and offers a view of the entire structure, connecting elements of urban landscape and the valley floor to those of the terraced garden on the slope to which the house is strongly anchored. In this space, many daily activities take place on different levels: on the first floor, the dining area with adjacent kitchen; on the second floor, a study and a living room that overlooks a new courtyard to the north, created by lowering a portion of the garden.

The new courtyard looks like an open-air room, characterized by both old and new elements, and conjoins the two orthogonal axes: the north-south axis that crosses the house, and the east-west axis that structures the garden. The open space extends towards the west in a series of steps in lawn defined by stone curbs that emphasize the existing geometry, connecting the lower level of the new courtyard to the main terracing that extends longitudinally for roughly half of the surface of the garden.

The difference in levels between the two parts has also been resolved by a stone staircase that has been grafted into the path at the foot of the wall, which gives rapid and easy access from the house to a smaller building located at the north-west end of the property.

This narrow and elongated-shaped annex, positioned to support the terrain, represents an important extension of the house and is in direct contact with the garden. Through a few but essential interventions, the renovation of the small building has strengthened the relationship with the surroundings and defined new spaces for outdoor life, in harmony with the character of the place and its peculiar beauty. 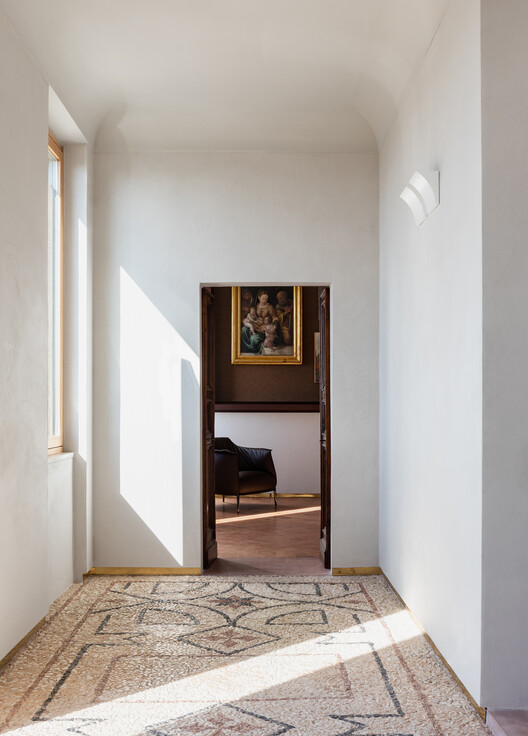