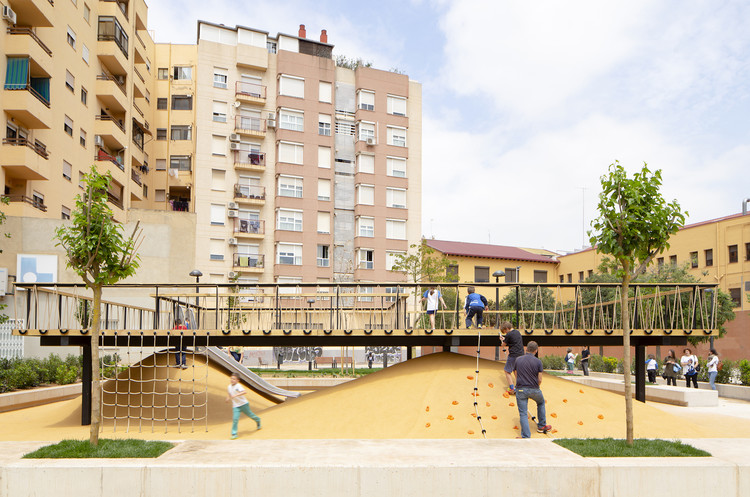 Text description provided by the architects. The project ¨Playground landscapes – Santa María Mazzarello Square¨ of HDH architects, aims to rehabilitate a lost space in the neighborhood and establish a meeting point for leisure and social encounter. Located in a green space of the city, and protected from the road traffic, Santa María Mazzarello Square will work as a connection vector between Av. De La Constitució and Av. Primado Reig.  The project consists of the main playground area, around which a series of paths vegetation, and lawn spots are arranged.

The central main space is regarded by HDH architects as a part of a line of investigation over playground landscapes, to which also belongs ¨Castellar- Olivera Park¨ honored by the Mention COACV Awards 2019. The continuity in the research and study of these types of spaces and children interactions has helped to make clear, that for them there is no better approach than giving a child ¨toys¨ which are not formally recognizable, for example, a caste or a little house, sometimes just toys with established usage standards; leading to repetitive games that don't awaken children's creativity. This project, on the other hand, is committed to being a “playground landscape” in which children can give free expression to their ideas and imagination.

To make it possible a free system is needed, in which a child can generate their own game rules.  It is a continuous search of arousing children's creativity when using a space across different types of surfaces, materiality, and shapes. From the one side two independent game planes were generated, which without touching each other, are enclosing the expanding air mass and it contracts to propose to cross around the space as a game itself. On the other hand, each of these planes is transformed allowing traditional games to join, such as climbing dams, vertical climbing nets, slides, etc. always as a transition mechanism between both planes. This double horizontality generates infinite paths allowing the child to experience different sensations using the same elements.

By the intervention, the Santa María Mazzarello square moves away from the improper uses that had been hosted during the last decades, to pick up neighborhood activities associated with its closest surrounding. Passing through the new park, one can find different activities when advance. The green Zone next to the access, under the shadow plane that provides the trees, benches and seats serves as a prelude to the central piece of the garden. But, also as a meeting point between the school, located just a few meters away. Continuing towards the east, crossing the green zone, the ground plane descends and the child's step accelerates to reach the central play area. From this point, the child becomes a protagonist in a landscape thought/studied and designed for the game. And so, is working as a square, this small piece of the city called “Plaza Santa María Mazzarello” recovers its identity. 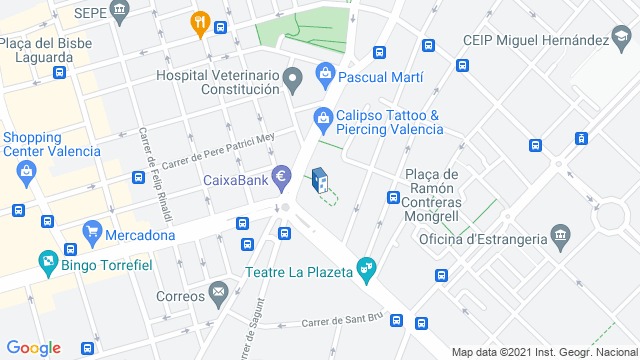 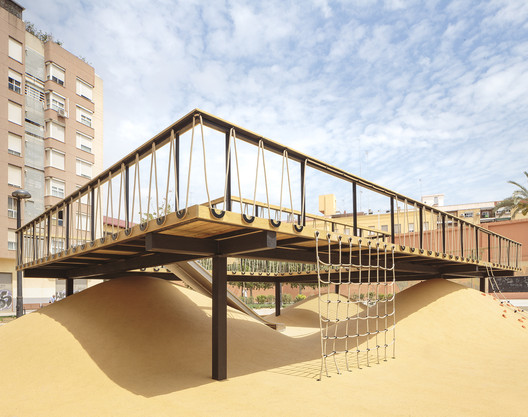 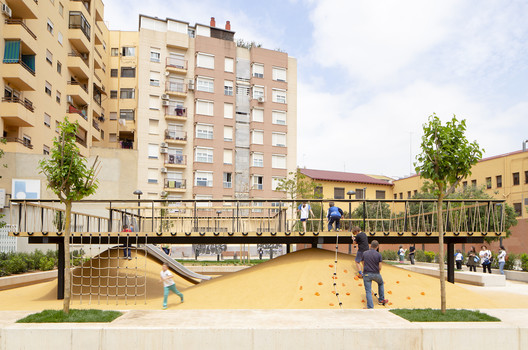