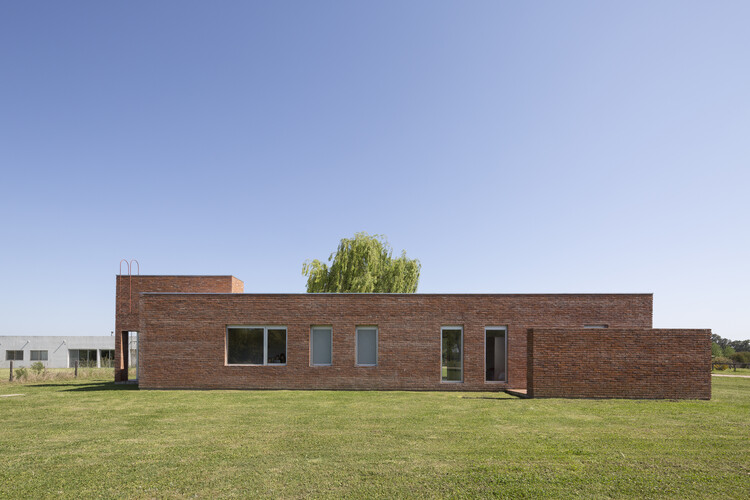 Text description provided by the architects. The idea of ​​gathering homes under the premise of "country club" led us to reflect on the type of architecture that we would propose. To the basic design, premises were added the imaginary and compositional elements of a country house; the challenge of the studio would be to take these elements in a current key without ceasing to refer to the idea of ​​refuge and introspection of the interior of the house together with the close contact of life with nature, through a predominant element in country houses, such as the gallery, a transition between the inside and the outside.

The "classic" bedrooms to the east, the opening of the living-dining room, gallery through, to the north and a controlled west, was materialized with a one-floor house developed under the cloister typology: bedrooms, living-dining room and "barbecue area" build three of the four faces of the cloister; and a long and narrow pool represents the fourth face, generating its own landscape around the only two existing trees on the land.

The composition of the house is a kind of volumes, planes, and spaces that are degrading towards its extremes. The bedroom sector begins with the volume of the laying patio, rises in the rooms, and is crowned in the volume of the water tank. The house turns and goes down in the living-dining room and dematerializes in the garage and in the “barbecue area”. The highest point of the composition is a hinge that articulates the public and private parts of the house. It is also a sector that opens up generating crossed visuals towards the horizon.

In relation to materiality, there was also the premise of a "country house", where certain durable and low-maintenance elements solve the totality. The brick is the predominant material, this was used for the floor, wall, and ceiling. The idea of ​​the wide wall as a bearing wall and the main thermal insulator, was materialized through a double wall with an air chamber. The ceiling of the living-dining room was made with a flat brick vault and wooden beams, and the entire exterior floor was resolved in common brick. As a visual continuity, the entire interior floor is red tile.

The idea of ​​raising the fewest possible elements not only refers to the materials but also to the autonomy of the house to solve certain points. The exterior faces materialized as compact volumes seeking privacy and control from the sun without the need for sunshades. The plan of the rooms is a game of full and empty that allows the desirable entry of the morning sun, while the volume of the laying yard closes the main vehicular traffic. The volume of the rooms and the living-dining room generates privacy inside the cloister, where the latter is solid towards the neighboring house opening in the opposite corner (southwest) looking for the horizon and letting in the last rays of the day.

The Gallery allowed us to expand the territory and unify programs, which generates paths and living spaces.