Text description provided by the architects. The sharp slopes on site extend all the way down to the river Zuari in the south, and are flanked by lush tropical greens on its east and west with the approach road on its north. The plot itself though was largely barren other than a large, frail looking mango tree that occupied the centre. The result was a breathtakingly satisfying composition: off a merrily flowing river at the far end, enjoyed through an ideal arrangement of palm grooves, under which wooden canoes regularly get pulled up by hardworking fishermen while your eyes wander over the age-old fishing village among the periodic tintinnabulations of the village temple.

The very first ideas emerged when the visibly unhealthy-looking mango tree located right in the middle of the plot had miraculously revived itself, as though finding a new purpose in life. This was certainly a good omen, which immediately brought the tree among central ideas for the house.

The house is organized in two levels. The upper level has the living, dining and kitchen and is accessible from the road level, while private quarters are on the lower level. Exposed laterite retaining wall is used to raise the side setback to the living room level to create accessible landscaped gardens on upper levels, this gives an illusion of structure being single. The living and dining hall is proportioned on the lines of the traditional Goan ‘Sal’ with high wooden ceiling, exposed steel trusses and tall windows connecting with the view. The two shorter sides with glass partition connect the hall to the open greens on either side making it seamless with the exteriors.

A wide verandah on the south side acts as a protective transition to the riverside view lined with wooden columns and serves as vantage point to view the gardens and the river beyond. The three en-suite bedrooms and a study on the Lower Floor are more private and have their own verandahs, courtyards and gardens. The material used was largely local. laterite and the black igneous rock excavated from the site was used in construction of walls and pavements respectively. The house itself was kept pretty monochrome with the use of red colour that was the colour of the soil itself. Coloured Concrete floor further unified the overall scheme into a one monolithic whole- as if the house itself had emerged from the ground. Local varieties of Timber such as Shivan and teak were used in false ceilings and other woodwork.

While the construction was going on , another parcel of land was added to the house as an extension on the south side . The idea was to make the house self reliant- to procure healthy and organically farmed vegetables and fruits . Various locally known species of fruits,  vegetables  and medicinal trees and plants were identified on the advise of experts and planted . Today there at about 130 different species of flora that have taken firm roots and the dependence on the local markets is greatly diminished. The photovoltaic cells on the roof generating about 14 KW of power and a well on the lower plot keeps the house fairly off the grid. 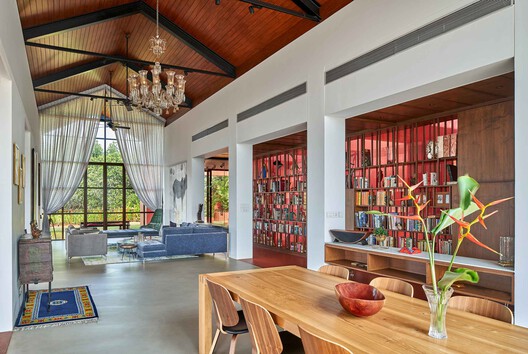