Manifesta 14 recently announced that the 2022 edition of the European Biennial of Contemporary Art will take place in Prishtina, Kosovo. In preparation for the event, Carlo Ratti Associati has been commissioned to create an urban vision for the host city, focusing on sustainable solutions attuned to its current realities. The urban interventions showcase CRA's newly defined participatory urbanism methodology and explore how Prishtina could be transformed by the citizens' act of reclaiming public space. 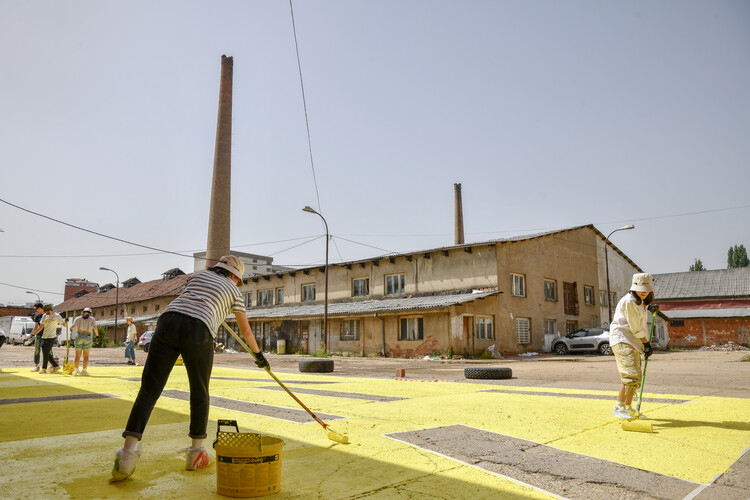 Since its 2018 edition, Manifesta has invited leading design practices to conduct research and develop long-term strategies on critical issues regarding the hosting city. CRA's project for Manifesta 14 is a continuation of the design collective's research on open-source methodologies aimed at transforming architecture into a "transparent, inclusive and bottom-up ecological system". For the capital city of Kosovo, CRA introduces a framework for participatory urbanism, consisting of three phases. The initial step required the creation of an extensive series of maps, highlighting the public spaces of Prishtina, thus pinpointing the underused or misused places. The second phase taking place over the course of this summer consists of creating a series of temporary urban interventions across the identified sites, exploring different ways of reclaiming public space. Finally, the citizens will give feedback, highlighting which interventions should be preserved and consolidated.

It's a unique moment for urban life. Far from rendering cities obsolete, the health emergency of the last year has acted as a catalyst for innovation. This allows us to rethink most assumptions on how we would like our cities to be - in an urban rendition of what the economist Joseph Schumpeter called "creative destruction". Our project for Manifesta 14 is a first-time experiment with a new methodology for open-source urbanism.- Carlo Ratti, founding partner of CRA

The first intervention turns a disused space of the Brick Factory, the city's most important post-industrial site, into a community space, an "urban living room". The project intends to open the conversation around how this space can be re-appropriated by the citizens of Prishtina. The second intervention will focus on Hivzi Sulejmani Library, an early 20th-century building located in the city centre, whose garden is currently inaccessible. Together with the students from the Architectural Faculty of Prishtina's University, CRA aims to create a new communal space for the neighbourhood. The series of interventions are meant to showcase the opportunity of reactivating abandoned public spaces.

Within Manifesta 14, taking place in Prishtina, Kosovo, we are looking for a radical change in biennial policies: one of supporting and co-creating relevant, sustainable artistic solutions in order to increase creative capacity. We will do this in close relation with Prishtinabased citizens and the artistic and civic communities so that we can explore possibilities of nurturing connectivity and renewing our relationship with nature whilst fostering greater awareness of our current realities.- Hedwig Fijen, Founding Director of Manifesta

Founded by Dutch art historian Hedwig Fijen, Manifesta is a nomadic biennial that introduces context-specific creative experiences in each host city, developing a dialogue between art and society, with the aim of catalysing positive social change across Europe. The 14th edition of the biennial will be held in Prishtina from the 22nd of July to the 30th of October 2022.