Frank Gehry's long awaited LUMA Arles has finally opened its doors to the public. The stainless-steel-clad tower with a twisting geometric structure sits in a 27-acre creative campus at the Parc des Ateliers in the French city of Arles, housing exhibition galleries, project spaces, and the LUMA’s research and archive facilities. Over 45 world renowned artists and designers, such as Etel Adnan, Olafur Eliasson, Koo Jeong A, Carsten Höller, and Kerstin Brätsch will feature their creations across the tower's 12 levels, making it a focal point for global artists, curators, and art enthusiasts. 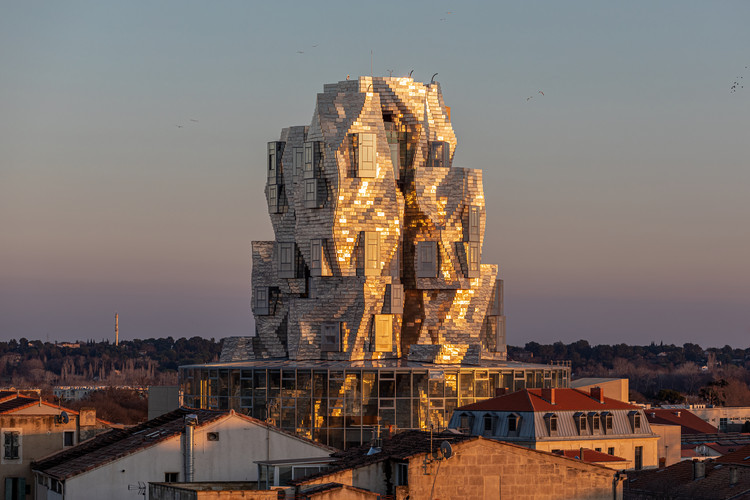 We wanted to evoke the local, from Van Gogh’s ‘Starry Night’ to the soaring rock clusters you find in the region. Its central drum echoes the plan of the Roman amphitheater. -- Frank Gehry

The design of the structure is inspired by the site and its surrounding landscape. Constructed from a concrete core and steel frame, the 56 meters-high tower emerges from a circular glass atrium mirroring the town’s Roman amphitheater. The distinct jagged form above the atrium is inspired by limestone cliffs around the city, with glass boxes extruding from reflective aluminum panels.

The structure is part of seven existing industrial buildings, four of which have been restored by Selldorf Architects. The complex sits on an abandoned rail yard, and is part of a newly-introduced Parc des Ateliers, a public park designed by Belgian landscape architect Bureau Bas Smets.

Among the artworks displayed is an unseen before pink sculpture by Franz West and a full-scale glow in the dark skatepark by Koo Jeong A. Carsten Höller’s Seven Sliding Doors Corridor, an-infinite-like mirror passage has been reimagined and installed across the site’s pond, while Kerstin Brätsch has created a site-specific mosaic floor for the Café du Parc. Philippe Parreno has created a new immersive artwork that uses algorithmic technology. Etel Adnan covered the entire back wall of the auditorium with a unique ceramic installation. Ólafur Elíasson’s Take your Time, a circular rotating mirror affixed to the ceiling, is installed above the double-helix staircase.

The Philadelphia Museum of Art opened to the public earlier this month after completing an extensive four-year renovation and interior expansion project led by Frank Gehry. The intervention, dubbed the Core Project, focused on renewing the museum's infrastructure, creating galleries and public spaces while leaving the 1928 exterior untouched.