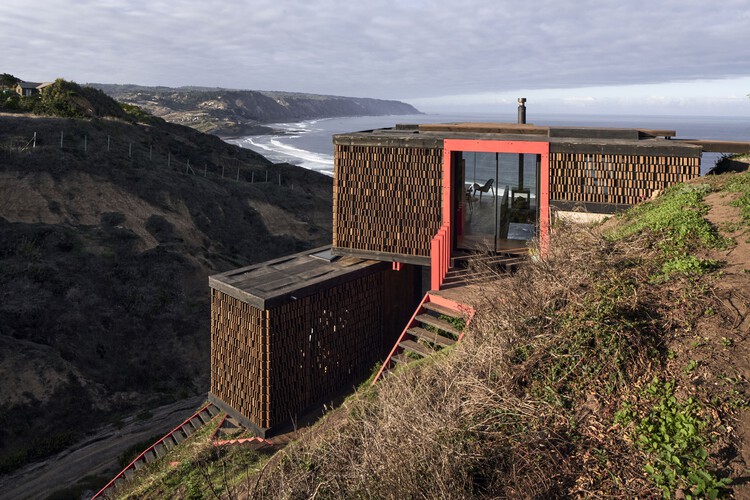 Text description provided by the architects. Panal House, located in Condominio Quebrada Matanzas, poses itself as an astonished viewer by the Pacific Ocean, raised 90 meters above sea level, seeking the best views that naturally lead us towards the southwest to make the most of its breathtaking surroundings.

This project’s first hurdle seemed challenging enough. It required to settle a structure over a 55° sloped hill with poor ground quality and a 15 to 25 knots south-blowing yearlong wind. Amidst a hostile yet charming setting with great views of the ocean, simultaneously calling upon us to connect and reflect on the best way to inhabit this coastal area.

Structured with a mixed system of naked concrete bare loading walls appearing in three levels, which are set-in the hill, steel, and wooden elements, it is that the house seems to be suspended, as well as being able to have a high percentage of windows on its facades.

The project consists of two separate levels divided by a 40-meters-long red stripe that runs from the lower access and acts as a connector between both. This gesture allows for the development of individual facades in which both structures benefit from a sea view and the most favorable hill levels, creating a visually pleasing break.

The upper level hosts the main entrance, via a space-organizing hall that houses one bedroom, bathroom, and a common room that works as kitchen, dinner, and living room, as well as the staircases that lead to the other levels. The fireplace was thought and designed as a sculptural element, and therefore placed in a central spot. Presenting two glass sides, it grants the possibility to be reflected on the surrounding window panes, reaching every room and both floors. From the north-facing terrace, the roof is easily accessed, adding a third level from which the full scope of the house is truly appreciated. A portion of this roof remains uncovered, allowing the sun to filter into the lower levels.

Benefiting from its context, the house allows itself to also open up to the sky and connect with the starry sky of Matanzas. The main bedroom in the lower level has a 360º circulation where the bed is almost centered within the space, and the storage and bathroom take a secondary role disguised in the circulation behind it.

The outer exterior facade is a rustic honeycombed wooden structure, acting both as a camouflage of what happens inside the house and scattering the strong winds. At the same time, it generates an interesting show of light and shadow which varies from season to season. As the morning goes by, this shell lets the sun rays enter the house pouring with light every space as the sun goes up. By night, it is the house the one emanating the light as a lantern, leaking within the gaps, whilst inside its being reflected on every window.

Panal House offers at the same time a radical experience and an experimental way of living as it integrates all spaces: the outside and the inside, vertical and horizontally. The ocean, the moon, the sun, the stars, fire, and earth are the main elements that make us reflect on this experiment on living through open and permeable spaces, sensitive to perceptions and willing to connect with those who inhabit them. 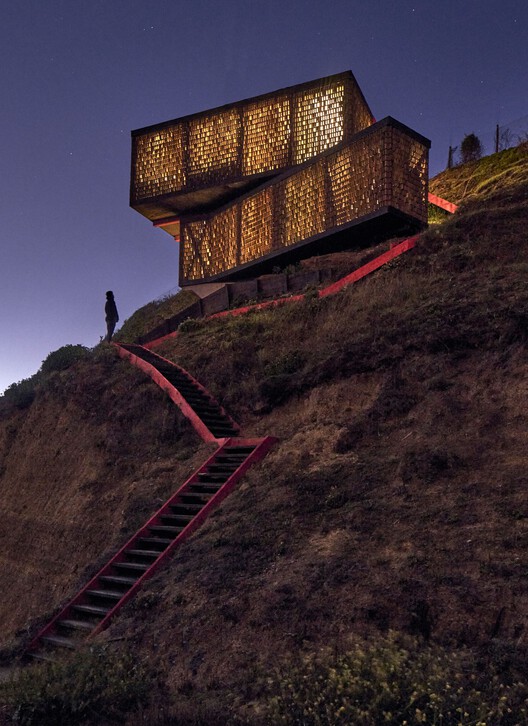