The discussion around how we plan the cities we want to live in is a never-ending conversation. As our world experiences shifts that impact urban designs in both predictable and unpredictable ways, some principals have held true- that cities that rely less on private transportation, create walkable neighborhoods, boast a multitude of public parks and spaces, and are designed at a more human scale tend to be favored and well-recieved by the people who inhabit them. Enter the concept of New Urbanism. Backed by these ideologies with a modern spin on is how they might apply to our 21st-century lifestyles, New Urbanism a planning strategy that has been both praised and critiqued since its implementation.

The principles of New Urbanism were first created in the 1980s as an alternative to the suburban sprawl that was characterized by low-density zoning, and single-use buildings and homes that had become popular after the end of World War II. Underscored by the desire to make cities more walkable and remove the dependence upon cars, New Urbanism reflects on historical precedents and seeks to return to a more traditional planning strategy as seen in places like Charleston, South Carolina, and Georgetown in Washington, D.C. Beyond the pedestrian-friendly zones, the idea is that these neighborhoods would be packed with a combination of multi-family housing buildings, flourishing businesses, and commercial sites that line a gridded street system. All of this space would then be bisected with a “Main Street”, where all of the town activities would come together in a central location.

New Urbanism strategies, and their offshoots like the 15 Minute City, have been tested all across the globe. One of the first and most notable projects is the Stapleton neighborhood in Denver, Colorado. It was rezoned to become one of the largest mixes of residential and commercial areas in Denver, with an emphasis on public parks. But the reality of how Stapleton is utilized by its residents has become one of the biggest criticisms of the New Urbanism movements in general. A study from the University of Colorado in Denver concluded that Stapleton actually has higher vehicle speeds, fewer bikers, and fewer public transit users when compared with other neighborhoods in the region.

Despite all of the promise that New Urbanism holds, in recent years, there have been some concerns with how these cities are planned from a density perspective. If they are so dense, how will residents experience a level of privacy? The other concern is that not everyone wants to live in a city like this- some people actually enjoy the suburban and rural sprawl that affords them a large yard and separation from their neighborhoods. Some of the proposed towns also feel like more of a movie set, with their heavily manicured designs, and don’t reflect the way in which cities naturally grow.

Even with these criticisms, the ideas behind New Urbanism have only continued to gain traction, hold promise in the eye of city planners, and its ideas are still implemented into many new developments around the globe- even if at a smaller scale. It’s only a matter of time before more cities are walkable and their policies support high-density designs. 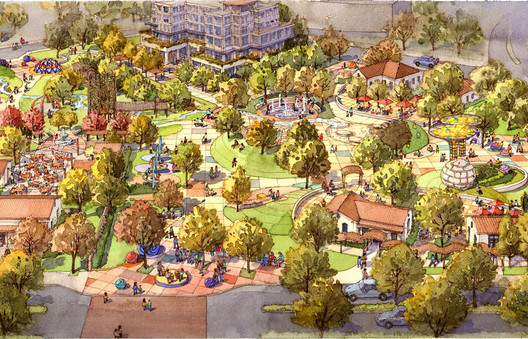