Initially intended for demolition, Station A, one of the historic structures of Dogpatch neighbourhood, is now being repurposed as the local community advocated for its preservation. Building on its experience with adaptive reuse projects such as London’s Tate Modern, Hamburg’s Elbphilharmonie or Madrid’s Caixaforum, Swiss firm Herzog & de Meuron proposes a careful reconsideration of the qualities of the industrial site, assigning new uses to the former power plant’s architectural features.

The reinvention of Power Station will bring new life to a significant building from the city’s colourful past and will anchor this area as a destination on the San Francisco waterfront” - Jason Frantzen, senior partner at Herzog & de Meuron.

The transformation of Station A retains a large part of the turbine hall, the foundations of which support the added floors. The different platforms which once housed the machinery for power generations will be transformed into gathering areas overlooking the atrium-like space of the turbine hall. The façadse of the upper volume will feature overhangs, and the project will incorporate natural ventilation strategies, thus setting a sustainable transformation of the industrial building. The Station’s ground floor will contain a lobby, a conference centre and multi-functional spaces, while upper floors will be dedicated to office spaces.

The Power Station plan is San Francisco’s most extensive development project to date and will feature housing, retail, office spaces and outdoor areas, creating a new mixed-income neighbourhood on the city’s waterfront. Other buildings within the development are designed by Foster+Partners and LMS Architects. 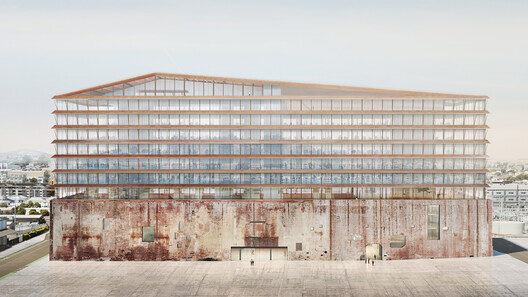