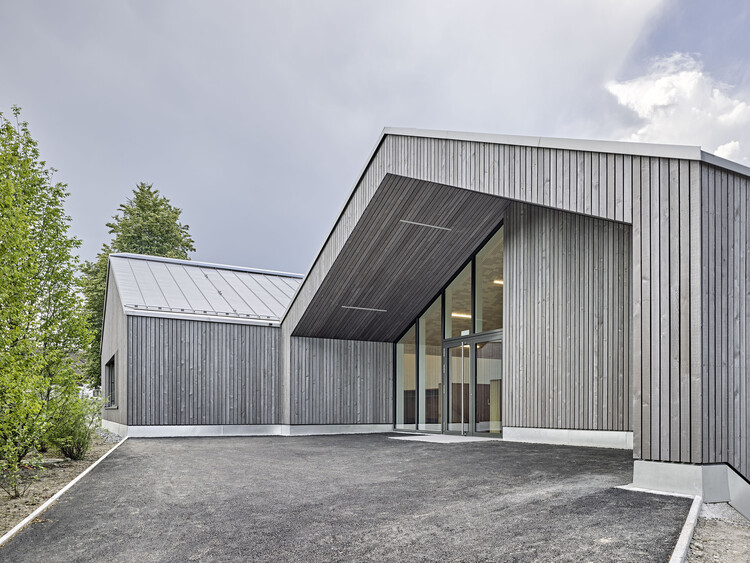 Text description provided by the architects. Located in the south of the Swiss municipality of Hausen am Albis, the village of Ebertswil sits on a gently elevated plateau with wide-open views of the canton of Zug, its lake, and the Swiss Alps. Despite the brisk pace of home building since the 1970s, the village has managed to retain its rural character with farmhouses, barns, and lots of half-timbering continuing to characterise the landscape.

This same growth put pressure on the limited capacity of the listed school building and in 2015, with an eye on future demand, the local authority decided to abandon its outdated temporary fix in favour of a more lasting solution. The plan was to build a new kindergarten incorporating additional space into which the school could expand close to the historic schoolhouse in the centre of Ebertswil. A design competition launched in 2016 was won by Zürich firm illiz architektur and their context-sensitive plans.

Two archetypal wooden building forms are joined together, slightly offset, to sit side by side on the green edge of the site, a double-gabled roof neatly capping off the composite space. Despite its relatively large footprint, the resulting new build looks quite at home in the long-established village centre where its characteristic silhouette creates references to the neighbouring buildings.

To make the best possible use of the steeply inclined site, the building’s lower floor is built into the slope and connects a lower garden with a higher courtyard linking the new kindergarten to the village street and the old schoolhouse. This compact layout, which works around the existing mature trees, made it possible to retain the generously dimensioned outdoor spaces. Each of the mirror-inverted gables ends projects a good distance beyond the facade, creating a spacious roof overhang that provides shelter from the elements and shapes a halfway space between inside and out.

The building envelope, including all alcoves, balustrades, and soffits, takes the form of a shimmering, silver wooden facade whose vertical lines continue in the panels of the steeply pitched roof. Carefully colour matched, the surfaces join to form one homogenous unit that emphasises parallels with traditional local building conventions despite the contemporary treatment.

Inside, the juxtaposition of the dual structures creates a two-storey access and meeting space which forms the heart and soul of the complex. The central staircase is interwoven with sculptural wooden elements that create individual cloakroom alcoves for each kindergarten and school class. Like boxes giving onto a theatre stage, they face the common central core, offering a variety of visual connections from one to another as well as exterior views.

The composite roof form is also discernible from within. Rising and falling ceilings clad in white varnished Lignatur™ panels form a clear contrast with the darker wood surfaces that provide a seamless finish for the floors, stairs, and cloakroom alcoves. In the classrooms themselves, colourful furniture including generous amounts of storage space frames the large window openings that give each room an individual feel and offer views of the surrounding green space and neighbouring school building. 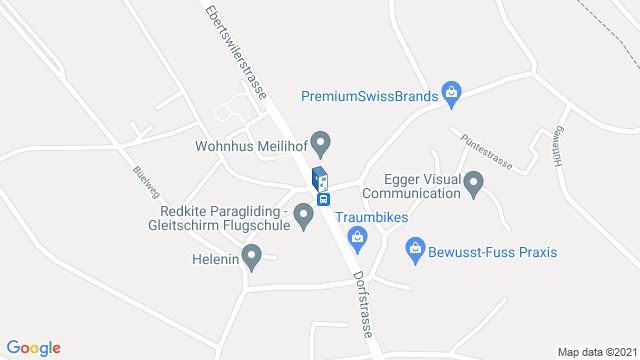 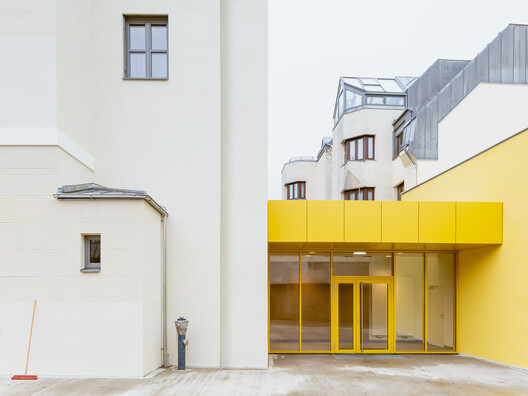