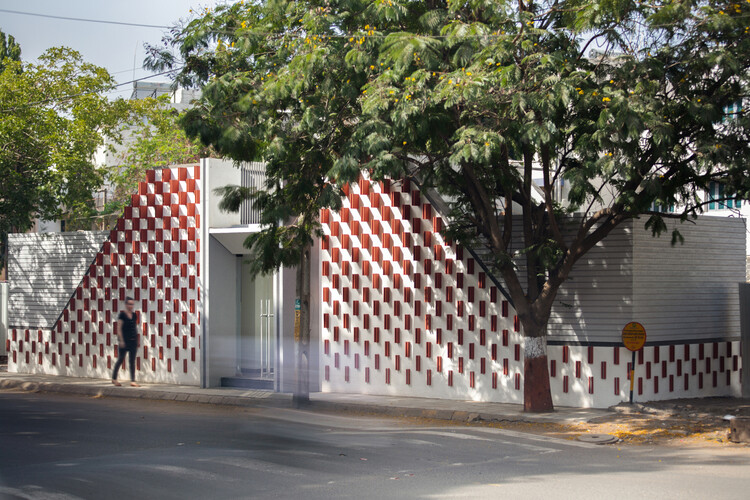 Text description provided by the architects. Located in the rapidly growing city of Rajkot, this ephemeral project serves as a temporary sales pavilion for a real estate company and its new commercial development called ‘Business Centrum’. The pavilion had to be quickly assembled for a limited period of time, till the proposed development gets completely built.

The program comprised basic functions which included a meeting room, site engineer’s office, reception area, a pantry and a restroom. The site is a north facing corner plot having its longer edge aligned with a bustling 18 metre wide road. There was an existing residential building on the eastern side of the site which was scheduled for demolition, so the edge around that structure was off limits. In the remaining part of the front edge, there were two fully grown trees spaced 12 metres apart from each other. It was observed that the foliage of these two trees was creating a void in between them.

This void was forming an upward bulging shape and the immediate reaction was to introduce a volume mimicking it. This volume was then divided into two equal parts by the introduction of an entry point that opens to the reception area. The meeting room occupies one part while the engineer’s office and service areas occupy the other part of this division. In order to further formalize the entrance, two chamfered columns were added on either side.

The private nature of the program required the internal spaces to be visually blocked from the busy road; therefore the front side had to be completely solid. The back side is made up of large openings so that the construction work can be regularly monitored. It was a conscious decision to visually break down the large front side volumes into smaller fragments and the lush beautiful trees served as inspiration again.

Their interwoven network of branches and leaves generated the idea of having a network of fins on the façade, whose depths increase as they rise from the ground. This arrangement creates dynamic views as the perception of the pavilion keeps changing when one moves across the length of the pavilion.

Changing shadow patterns are also created throughout the day with the movement of the sun. The trees too cast a series of dappled light patterns over the façade, adding an almost magical-like element. Taking cue from Eduardo Souto de Moura’s Casa das Historias Paula Rego, the fins here are of an almost terracotta like colour which acts as a contrast to the lush green of the trees framing the pavilion. In the absence of any specific context, the two most immediate natural features at the site have been used as inspiration at every step to add value to the project. 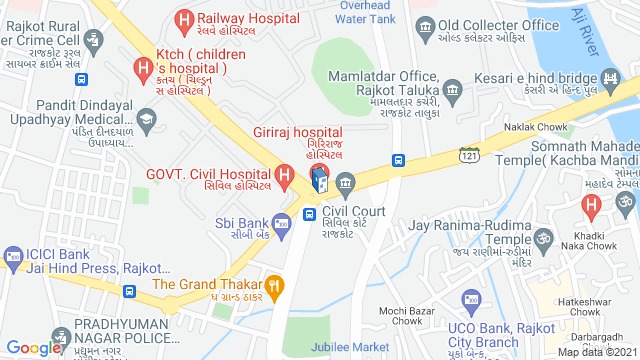 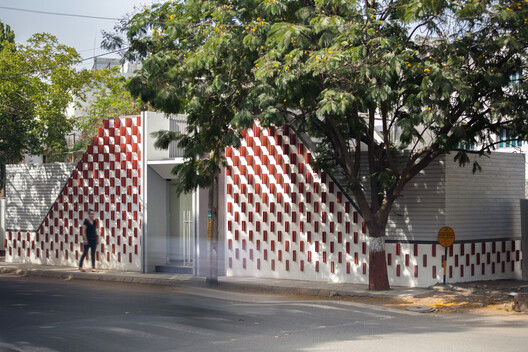