Save
House in the Woods / El Fil Verd, Estudi d'Arquitectura 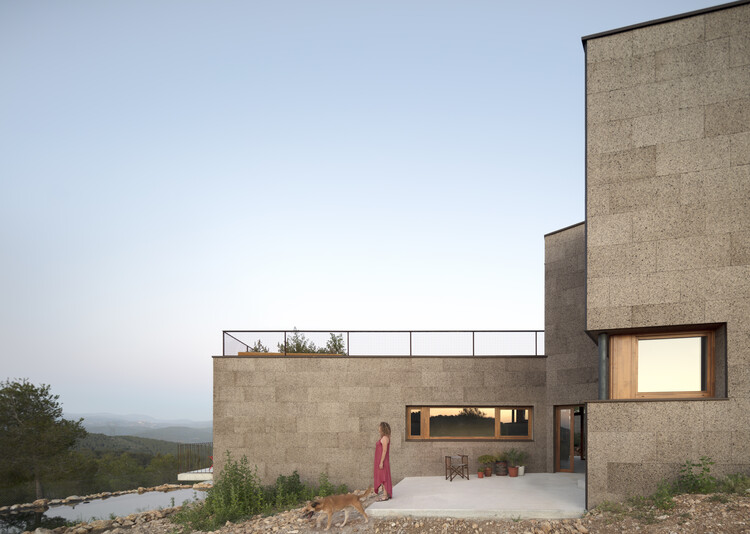 Text description provided by the architects. The design of this detached single-family house was commissioned to us by a couple with the dream of retirement living in the middle of nature. The site is characterized by Mediterranean vegetation typical of the area and includes olive trees, pines, mastic trees, and palm hearts on calcareous soils. The plot, of about 900 m2, is located at the end of small urbanization on the edge of the Garraf Natural Park, on the coast south of Barcelona. A construction that would allow contemplating the landscape and would entail low energy consumption was the main requirement of this commission. At the same time, the project presented multiple challenges: a steeply sloping, north-facing plot, and a limited budget.

Project details. The urban planning regulations place the built occupation in the center of the plot, allowing it to construct up to three levels. The proposal interprets this provision of the planning and strategically renounces the third storey in favour of integration with the topography and the natural environment. The project is interpreted as an opportunity to demonstrate that it is possible to build passive buildings, designed climatically and built with healthy materials at an affordable cost.

The house was conceived with the vocation of respectfully integrating with its natural context and of being a passive building. Based on simplicity and sustainability, the proposal offers a creative response to the initial complexities. The house is embedded in the terrain to adapt to the topography and blend into the landscape. At the same time, it takes advantage of the ground’s insulating power and accompanies the natural slope by stepping the interior spaces into two levels.

The geometry of the house is explained by the purpose of leaving nature as the protagonist and at the same time offering its inhabitants a protected and welcoming space from which to contemplate the landscape. The two arms of the built volume open to the North, the mountain of Montserrat, and the immensity of the natural park. The house is organized in a single volume articulated on two floors. The facades facing the street and towards the neighbours are intentionally devoid of openings. The day area and a bedroom are located on the ground floor; on the first floor, there is a second bedroom and a large terrace with solarium and garden. Each room in the house allows the contemplation of the forest from a different perspective.

The choice of materials responds to criteria of health for people, respect for the environment, and constructive and economic efficiency. For the exterior walls, aerated concrete blocks have been used due to their lightness and high insulating power; thermo-treated natural cork panels for the exterior finish of the façades and their insulation to blend into the natural environment too. For the interior finishes, lime and silicate paints have been applied. The upper face of the floor slab finished with quartz crystals, has been used as flooring. Solid pine wood treated with natural stains has been used for the exterior carpentry.

Technical explanations (bioclimatic and vegetal architecture). Before the challenge of achieving a passive building, the project adopts multiple bioclimatic design strategies that respond to a detailed study of the climate and the topography of the site. The building is designed by orienting it along the north-south axis so that it takes full advantage of the contribution of solar radiation in winter and natural ventilation is thereby more effective in summer.

Bioclimatic strategies during cold months. The following strategies have been adopted to heat the building during the cold months. 1. The South façade, in its glazed part, works as a solar heater due to the greenhouse effect. Solar radiation, which during these months has a reduced angle, penetrates the interior and is transformed into heat, increasing the house's temperature. The Trombe-Mitchell walls located on the South wall function as hot chambers that reach high temperatures during the day and transfer it by convection and radiation to the house’s interior. 3. On the North face, the openings have been reduced to a minimum to not influence negatively on the thermal balance. 4. On the coldest days, on the Northside, a high-efficiency stove can be lit, which provides the necessary input to achieve conditions of thermal comfort.

Bioclimatic strategies during warm months. To cool the building during the warm months the following strategies have been adopted: 1. The façade openings have been calculated so that they can safely ventilate during the night. Natural cross ventilation is enhanced by the difference in temperature that exists between the colder north façade and the warmer south façade. 2. Trombe-Mitchell walls work as “solar chimneys;” by heating up more than the house’s interior spaces, they extract the hot air from the inside, causing the entry of fresh air from the outside. 3. The deciduous trees planted in front of the South façade protect it from intense summer solar radiation. 4. The eaves of the South façade prevent the solar rays from heating up the glazed area of ​​the façade. The natural pond located below the building favours the air cooling and the creation of a humid microclimate. Throughout the year, the excellent insulation of the entire enclosure, the high-quality carpentry, and the elimination of air infiltrations manage to keep the temperature inside the house stable.

Green spaces and grey and rainwater treatment are integrated into the project design as part of the same bioclimatic strategy. In the southern area of ​​the plot, the autochthonous Mediterranean vegetation is preserved by implementing it with the planting of deciduous tree species. The aim is to protect the building and the Trombe walls from solar radiation during summer and allow the radiation to pass through during winter. Rainwater from the roofs is collected in a tank located below the parking space and is used for watering the garden and for the natural pond at the lower end of the site. The natural pond contains a plant filter that acts as a photo-purifier and promotes biodiversity in the local fauna. Greywater has been separated from wastewater for later recycling and recovery.

The heating demand for this building is 5.4 KWh/m2 year and the cooling demand 14.5 KWh/m2 year. No active air conditioning system is used, except for the wood stove. Photovoltaic panels have been installed on the roof to cover internal electrical needs. 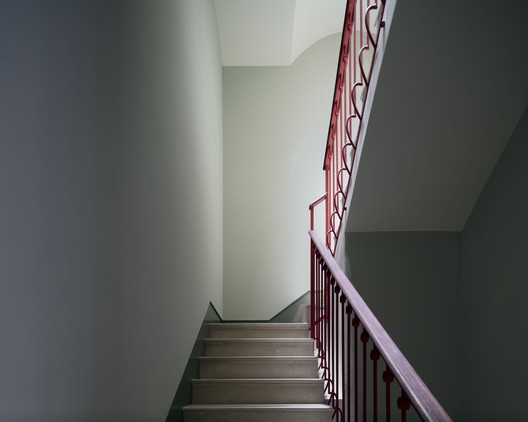