Save
House Rowa / MADE architects 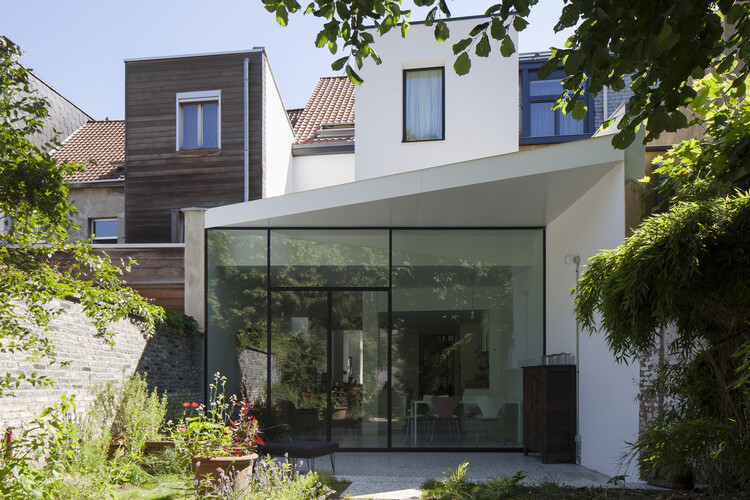 Text description provided by the architects. The existing building could be described as a standard terraced house, but there is one important advantage: a large and beautiful garden in the middle of the city block. Unfortunately, the relation between this garden and the living areas was blocked by a series of storages and small spaces situated on different floor levels and characterized by a limited ceiling height.

The project starts with the demolition of all these existing additional constructions on the ground floor and opening the facade towards the garden. By doing so, a clear and direct relation towards the exterior emerges and natural light enters the house generously. The floor of the new addition is lowered to obtain a comfortable ceiling height under existing concrete ceilings. The difference in elevation between the main house and the new addition is connected with a few steps spanning the width of the house situated at the border of the addition.

The new volume on the ground floor ends by connecting to the rear facades of both neighbours, and so creating a triangular canopy. At no point, the construction depth of the adjacent building is overruled. The actual facade is recessed, in order to create a covered terrace on the left side of the plot. The canopy also functions as a sunscreen that protects the southwest orientated glass window from the sun.

The large dining kitchen seamlessly connects to the terrace and the garden. The border between inside and outside is marked or even articulated by an extremely thin steel frame window and an identical floor in terrazzo tiles on the inside as on the outside. By recessing the window, it creates not only a terrace but more importantly an interesting in-between space, defining a gradual transition. The height of the window is maximized by pushing the canopy to the maximum height of the roof construction.

On the ground floor in the existing main house, we have two spaces: a living room near the street facade and a central area in which a double side cupboard in a dark turquoise is designed to combine toilet, cloakroom, television furniture and storage.

The bathroom on the first floor is designed in relation to the roof garden and roof terrace. Views are framed, or even blocked, in order to enhance the feeling of a green oasis in the city to the maximum. 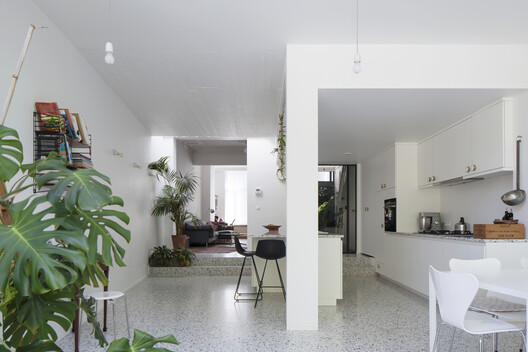