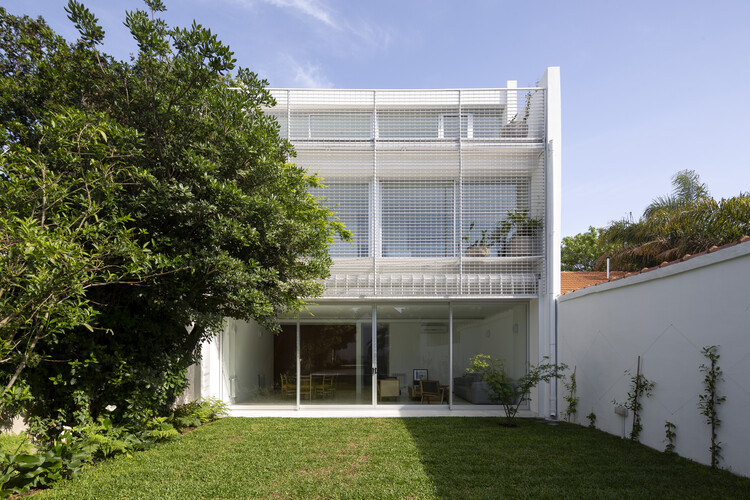 Text description provided by the architects. The commission consisted in the expansion and update of a single-family house located in La Lucila, a residential neighborhood in the northern outskirts of the city of Buenos Aires.

The original house belongs to a period in the argentine architectural scene that goes from the early 1920’s to the end of the 1960’s. Its language Rationalist, white, synthetizes the local appropriation of modern European orthodoxia exemplified in various cases through the neighborhood, being Carlos Vilar’s body of work an inescapable reference to this statement. The house itself suffered various interventions throughout time that played against its essence, we decided to unveil its original structure to respond to the needs of its new inhabitants, redefining spaces in order to achieve a more flexible and contemporary way to live.

So, we asked ourselves: what was the right expressive/structural field to materialize this intervention? Trying to avoid falling into mimetic endeavors with the existing structure we proposed ourselves to reinterpret the spirit of the early 20th century structural rationalism exploring the idea that structure itself could create space without the need of decoration.  The result was a lighter and fresh intervention, that promoted a direct relationship with the main space of the house, with the garden and the other programs that integrate this system: The swimming pool, the solarium and a living-dining loggia.

A series of experiences walk the user throughout a promenade from the sidewalk. A patio with semi covered spaces accompanied by new vegetation opens up the way to a semi covered space of generous proportions. The foyer becomes the great functional articulator of the house acting also as the mediator between old and new structures.

The living/dining space of generous proportions occupies the entire width of the plot stablishing a direct relationship with the garden thanks to huge sliding windows with numerous possibilities of opening from one side to the other.

The kitchen occupies the space that was once de living space, the resignification of this space gives the new use certain hierarchy. The lineal disposition of the countertops in counterpoint to the concavity of the existing windows to the front (a very distinctive feature of these “white houses”) generates certain fluidity and decompression to the space.

In the upper floor two bedroom for the children and a bathroom belongs to the original structure. The master bedroom, has a series of attributes that gives the space an independent character. This new space recognizes again the total width of the plot again gaining long visuals over the garden and the surroundings through a horizontal window from wall to wall, besides this it counts with an open dressing room and the master bathroom.

The upper floor always had the purpose to colonize what was once an inaccessible rooftop. A great space who´s flexibility becomes a study room or a family room depending on the needs of its users through the day.

Becoming a scenic overlook with terraces in both sides in relationship with the crowning of the trees, reaching long views of its surroundings.