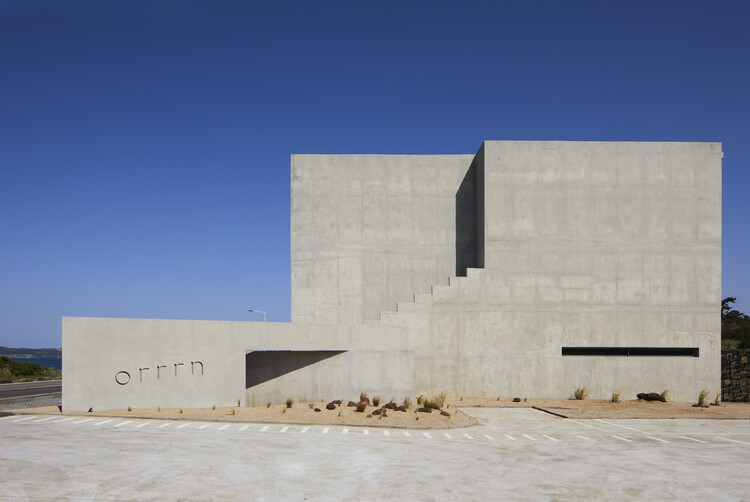 Text description provided by the architects. During the first field survey, the plan was to understand the overview of the surrounding buildings, but it was canceled. This is because Jeju Island already embodies lots of great emotions: the vibrant blue sea, rough but novel wind, yellow-colored Canola flower fields, black basalt stones, and the sway of the reed field while walking on gentle hills are unique experiences that are different from the daily life on the mainland. With the hope that the building will not disturb these good feelings and harmonize with its natural environment, we've set the course for the great concept of “just being here.”

In Korea, where the west, east, and south side is surrounded by the ocean, the experience of watching the northern sea with the sun shining from the back is special. The first time when we experienced this, the sea was blue with clarity, and deep while also wide with its horizon. Behind us were yellow canola flowers, laying amongst the stones that formed walls; on the low hill, reeds were fluttering in the wind. Instead of trying to stand out in such a great environment, we wanted the building to be part of nature as if it was originally here.

There are many oreums, gentle hills created by the island’s volcanic activity, in Jeju Island. Seongsan Ilchulbong Peak is one of them. Oreum is called parasitic volcano because it is created by a small volcano next to a large volcano. Instead of having a fancy concept, orrrn’s mass was intended to look like a small oreum naturally formed on Jeju Island. This was to naturally permeate the image of "Oreum" rising from its submergence from the sea. Therefore, a cascaded mass rises from the water space around the site. The mass that rises from the water continues from the outside to the inside, extending its constant climb. The brand name "orrrn" is also associated with the name “oreum”, which reminds the round structural form of the oreum, the image of climbing, and the feeling of a fresh breeze.

How one feels about the good natural environment in Jeju Island, depends on how one looks at nature. Climbing up oreums to engage with nature is quite an active behavior. Like climbing an oreum, we wanted to create a space where visitors can lively see nature and capture stories related to it.

1. Left mass. We imagined the feel of the northern sea and the southern fields through the amount of natural light. The first floor of the mass, which rises from the water space, is higher than the ground. If you want to watch the sea from the inside of the first floor, you need to climb a slope. From the slope, the clear blue horizon of the northern sea unfolds in front of you. Watching the sea from the floor that is slightly higher than the ground, the view overlaps well with the sight of cars on the road and people walking or on bicycles.

The first interior space you encounter has quite a low head to match in parallel with the view of the sea’s horizon. The lowered head of the room brings just the right amount of darkness in the space, which makes the blue color of the northern sea feel much closer. If you turn around, over the space full of southern light, you can see a field of canola flowers. This space resembles a long horizontal landscape painting full of light: another benevolent scene created by a lowered head.  After you pass through the horizontal landscape painting scene, and onto the southern space, the curvature of the raised ceiling softly captures the bright sunlight from the south. Unlike the first room where you watch the sea in a bit of darkness, you can see the Canola flowers blooming yellow while being in a room full of light.

2. Right mass. When you look at the building, it is divided into a one-story mass on the left and a two-story mass on the right; another climb through the stairs is needed to move on to the right mass. The stairs are to resemble a landscape of volcanic island (oreum) rather than just a physical trial to move onto the second floor, creating a situation (sequence) that associates with the surrounding nature as one climbs. On the halfway up, 1.5th floor, you can see the ocean from the oreum’s stairway; halfway down, 0.5th floor, there is an unfamiliar concept of restroom surrounded by flowers that have originally bloomed from the ground. On the 1.7th floor, you can see a baking room with bricks piled up inside to match the overall theme of the climbing design.

As you continue to climb up and reach the second floor, the sea unfolds like a picture in a simple rectangular shape created by a wall. On the second floor, which faces the large-sized ocean view given by nature, the furniture design takes the form of an exhibition stand, making the sea much more memorable. Human behavior here is rather static. Only the changes of light moving through the ceiling, the tide and the low tide of the sea, are slowly felt.

The second floor of the right mass connects to the rooftop of the left mass, and when you go out from the interior space of the second floor to the exterior rooftop, the sea visually opens up before you. Generally, the view from the rooftop and the view from the oblique roof shows different images depending on one’s attitude (situation). The idea behind the design was for people to engage more actively with the emotion of looking at the sea from the "roof" than from the rooftop. Moving away from the constructional idea of “interior floor,” we wanted to express the attitude of climbing up the ground that one stands on and interacting with nature around.

Instead of focusing on shapes, we proceeded with the concept of supporting the spatial design associating with natural elements. Glass tables lie horizontally parallel to the northern sea. If you look at the sea from the glass table, you can see a clear horizontal line. We intended to bring inside the peace and tranquility felt from the horizon of the sea. The depth of 830 glass sheets stacked in layers, glistening in blue, resembles the deep sea.

While the architectural mass was to resemble a parasitic island(Oreum), the bar table, which will grant customers time to relax their mind and soul with a cup of coffee(tea), is designed to resemble the columnar joints formed by the rapid cooling of lava. When we first discussed the main bar table, we wanted to bring in the elements of nature but not through common impressions. As we thought about the method, the idea of “the texture of stone" like columnar joints came up. To create a dull and crooked texture of a stone, a uniform vertical line was drawn on dozens of isopink pieces and carved with a knife to create a formwork. And with that, the finishing material made solely by "ATMOROUND " was born. Imagine the scene of a barista diligently making coffee at the bar table we’ve made with a coffee aroma filling the air.

Stones in Jeju Island are special. These stones constantly came out during the first groundwork. They were endless. The stones also served as a chair for workers and as a fixture for the protective material to withstand the wind. It was just that “common.” This “common” everyday material is rather hard to notice. An exhibition stand was set up next to the stairs leading up to the second floor in order to value the stones’ existence that came from the ground of "orrrn." The stone is displayed like an art piece to provide clues to infer the entire concept of this space.

"Orrrn" is not about the outer appearance nor interior shape of the building. Instead, it is about resembling the parasitic volcano oreum “just being here”: originally being part of Jeju Island's nature. Also, it is about understanding the feeling of looking at the sea while climbing this place and draw out a story about our attitude towards nature. 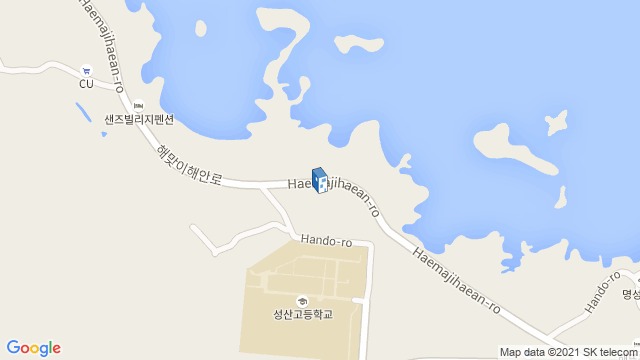 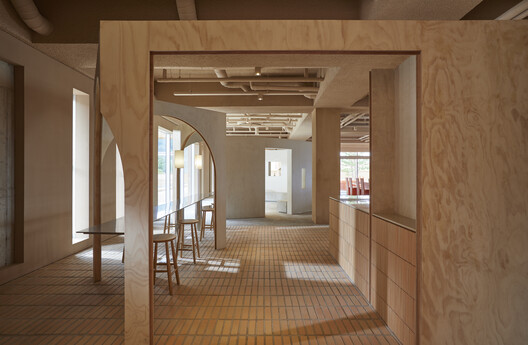 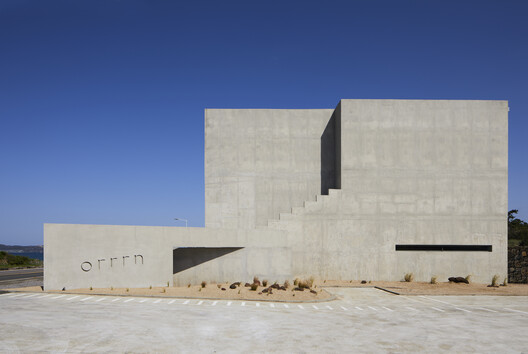