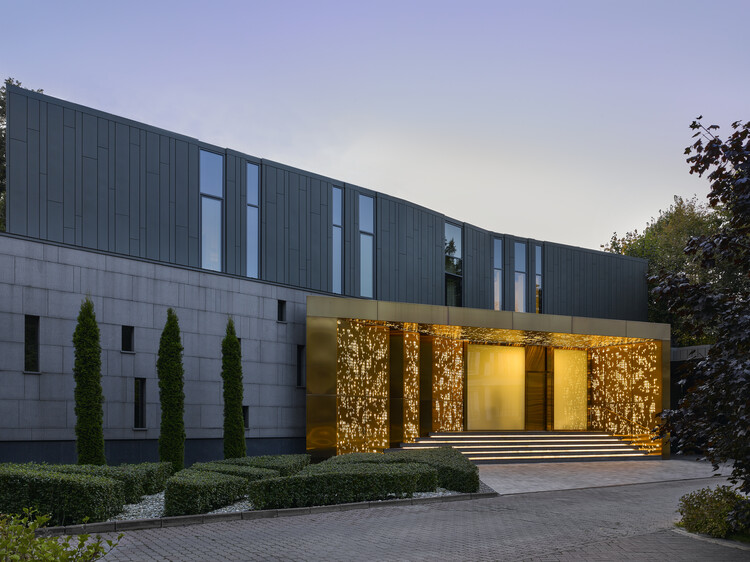 Text description provided by the architects. In the Russian Capital of Moscow, this contemporary home, set among the pine woods on an island in the Moskva River, introduces a revolutionary outward-looking approach to the city's architectural tradition. Designed by SAOTA, a South African architecture studio known for advancing the possibilities of 20th-century modernism, this home represents the tradition of the terrace, with its emphasis on an outdoor orientation, but in a context and climatic condition vastly different from the origin of the type.

Glazing systems have advanced to a point where they can effectively provide insulation in the Russian winter extremes, which solved the climate challenge. The real challenge was to mediate a dialogue between the two traditions to resolve the new approach harmoniously in the Russian context. The design addresses the urban architectural character of the capital city and the pocket of natural pine forest on the island, something of a rarity this close to the historic center.

The pinewoods that the site overlooks are thus a significant motivation for the design's open, outward-facing orientation. This approach allowed SAOTA to explore a new kind of architecture that invites as much natural light as possible during the dark winter months to compensate for the lack of sun and mitigating its absence. It's a design that makes comfortable spaces to appreciate the external conditions beauty, harsh as they may be. The architectural premise is one of contrasts: the street frontage's heavy protective presence speaks to the capital's monolithic architectural character, built to resist the extremes of heat and cold, which can vary 70 degrees between seasons.

Thus, the public character of the house provides a contemporary interpretation of the city's architectural character. Surrounding the main entrance is a sculptural buckle. This backlit bronze-clad feature façade not only acts as a visual prompt towards the entrance opening on the otherwise relatively featureless façade but also communicates the promise of the luxury and light interiors in the private spaces beyond the threshold. It heightens the experience of crossing from the public realm to the private domain with its predominant treed landscape.

From the garden, the architecture presents a contrasting façade. Open fragmented glass walls invite views of the pines in, blurring the distinction between what's inside or outside. The outdoor terraces and the faceted, angular façade create courtyards and external rooms that facilitate an interaction between landscape and architecture that is a departure from the local tradition. During the summer months, it is possible to live outside as you might in South Africa or California. In winter, the interiors, which are nevertheless warm and cosy, can celebrate the beauty of the snowy landscape and pines in an altogether new approach to the harsh conditions. Even in winter, the focus remains on the terrace rather than the hearth.

SAOTA used a silver-grey metal cladding on the exterior that complements and enhances the green of the plants and trees of the surrounding forest, providing an immersive landscape experience. The facade takes on the quality of natural material itself, highlighting a bespoke crafted quality in its detailing that speaks to the unique tailor-made approach to the house's design and furnishing, especially in the interior design. The heavy, protective quality of the façade, particularly that of the street, gives way to a warm, lively interior in the way the outer shell of a geode might reveal a warm agate or shimmering crystal interior. It imparts an exquisite, jewel-like quality to the interiors, which have a somewhat whimsical, playful quality in contrast to the exterior.

Inside, natural materials predominate, from exotic marbles, some backlit, to metal and timber surfaces that bring softness and warmth. ARRCC maintains a dialogue with the architecture in their interior design details. The television's metallic frame resonates with the ledge's faceted jewel-like form below it and the external brass buckle at the building entrance. A swirling sculptural staircase contrasts playfully with the angular architectural elements where they converge, resolving them in an organic flourish and signaling a subtle change of character between the more public sociable living space on the ground level and the bedrooms upstairs.

Softer, warmer materials predominate upstairs, where the more open, flowing, and interconnected spatial approach gives way to private spaces with a more relaxed, casual atmosphere. This project between SAOTA, ARRCC and Max Kasymov is the first completed SAOTA project in Russia. ARRCC, an interior design studio, proposed the concept idea for the interiors, and Max Kasymov, Moscow interior design studio, developed the project further and oversaw its realization. Supervising and coordinating the contractors and suppliers on the building were carried out by the Moscow studio as well as selecting materials, furniture and lighting.

By designing and manufacturing bespoke furniture in their own workshop, Max Kasymov studio was able to realize all the ideas and solutions proposed by SAOTA and ARRCC. OKHA also provided some of the villa’s furniture. The Nicci Swivel armchair, the Mesh side table, and the To Be One Lamp can be found in the living area. They are also responsible for the custom-made brass frame around the television. Elsewhere one finds OKHA’s Tofu dining chairs, Frame barstools and Solar mirror.

The villa’s overall experience suggests that SAOTA has mediated a new relationship between Russian domestic architecture and its landscape and climate. The modern villa's life-enhancing potential, realized in more temperate climates, made possible in this more extreme setting.