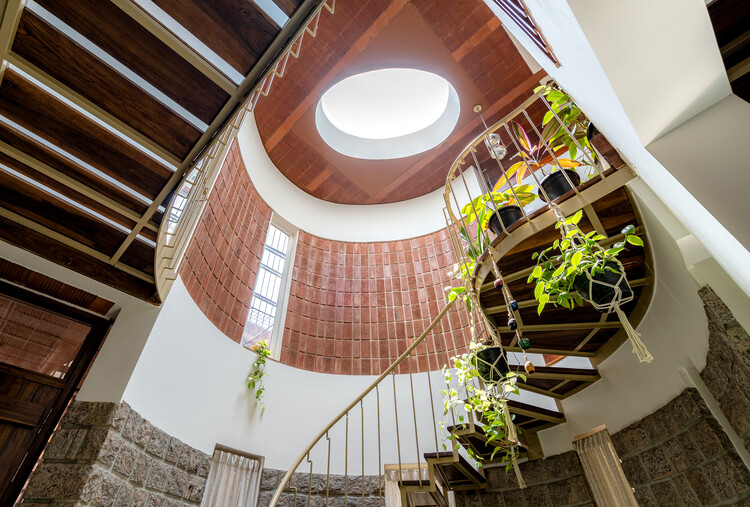 Text description provided by the architects. Wright Inspires is an eco-responsive design firm based out of Bangalore, India. Ambara, a warm and welcoming home, is like a puzzle with a 1000 pieces, which slowly pieced together with the right hands comes alive. The colors are vivid, the design sparks uniqueness and an ingenious glass sky-light at forty odd feet steals the show.

Looking at the context and where the site is located; achieving an atmosphere of serene calm inside a home, which sits within the busy-bustling city of Bangalore seems almost pretentious and borderline fictitious. But to do so convincingly is no mean feat. The area of the site being compact with namely three abutting neighboring plots, the main idea was to bring in light from the central sky-light. One can gaze into the sky from the Oval, as it is fondly called, and watch the clouds slowly sail by while sitting in the comfort of their own home. Hence, there is no doubt as to why the home is named “Ambara”, translating to “sky” in the local language of Kannada.

The stairwell which moves eloquently through the house is designed to ensure that natural light propagates through all the floors, making it a sight worth seeing. The use of natural materials such as terracotta jaalis along with exposed brick walls, recycled wood and raw pink stone give the home an earthy feel.

The structure as a whole adapts to the semi-tropical climate of Bengaluru while also being sustainable and green. An example of such adaptivity is the oddly shaped, amoeboid basement which stays relatively cooler compared to the surrounding spaces.

The first floor boasts a playfully meandering terracotta filler slab which is quite the architectural marvel. The windows to the west of the home are angled inwards to occlude the harsh evening sunlight and serve as a nice viewpoint towards a children’s playground around the corner. The facade of the home is sheltered by trees, a rather common feature in most of the homes built by Wright Inspires. The firm believes nature changes the way you work, think, and create and it forms an integral part of everyday life. 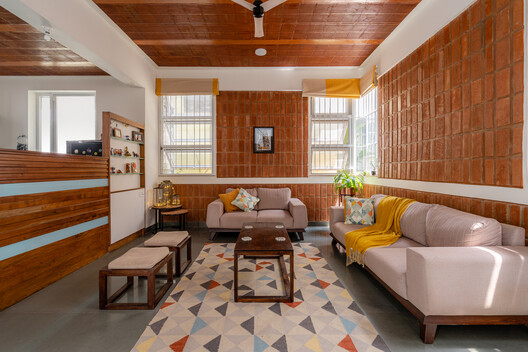 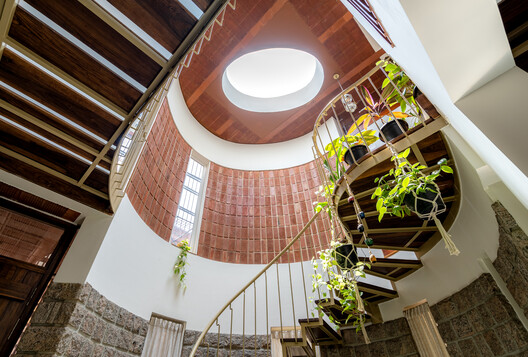