Adjaye Associates and Studio One Eleven, along with Continuum Partners will transform an industrial facility in downtown Los Angeles into a dynamic mixed-use master plan of residential, commercial, hospitality, and retail facilities. Titled Fourth & Central, the project proposes ten buildings, ranging in heights, design, and functions, transforming the area into a pedestrian-oriented community. The project, which is expected to break ground in 2024, will reflect the area's dynamic character with uniquely designed buildings that compliment the neighboring Arts District and Little Tokyo neighborhoods. 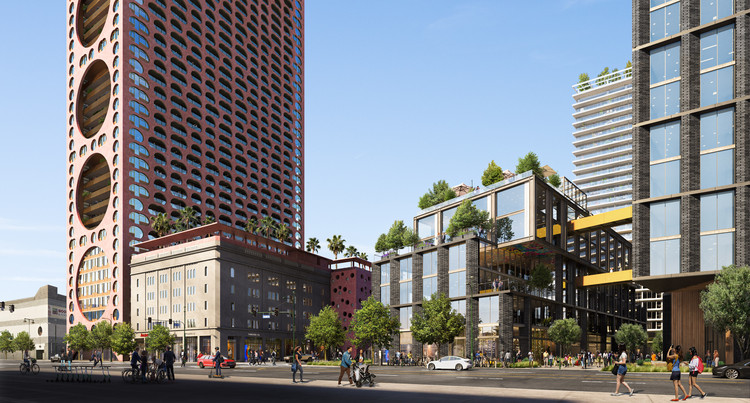 The proposal comes as part of the city's transformation into a dense and ecological community. The 2 million square feet project will sit on 4th Street and Central Avenue, and will reshape the entire area into a resilient and sustainable neighborhood that will give the citizens of Los Angeles new housing and job opportunities.

The site was built in 1895 as an industrial frozen food warehouse facility, and has remained as such until the new design proposal. Around 1,521 residential units and a 68-room hotel will be available in the project. 37,000 square will be dedicated for office space and 8,640 square meters will be for retail and restaurant facilities.

Fourth & Central's master plan is designed by Los Angeles-based Studio One Eleven. Two of the ten buildings in the project will be designed by renowned architect David Adjaye, which marks his first ground-up buildings in the city. Continuum Partners have previously developed the Union Station Transit Center in Denver, which demonstrated a total transformation of an urban space.

David Adjaye's most recent projects cover the African continent. Late 2020, Adjaye Associates unveiled the design of a new historical center for African consciousness, the Thabo Mbeki Presidential Library in Johannesburg, along with the Edo Museum of West African Art (EMOWAA), a museum that investigates archaeology of the Kingdom of Benin, including buried remains below the site.