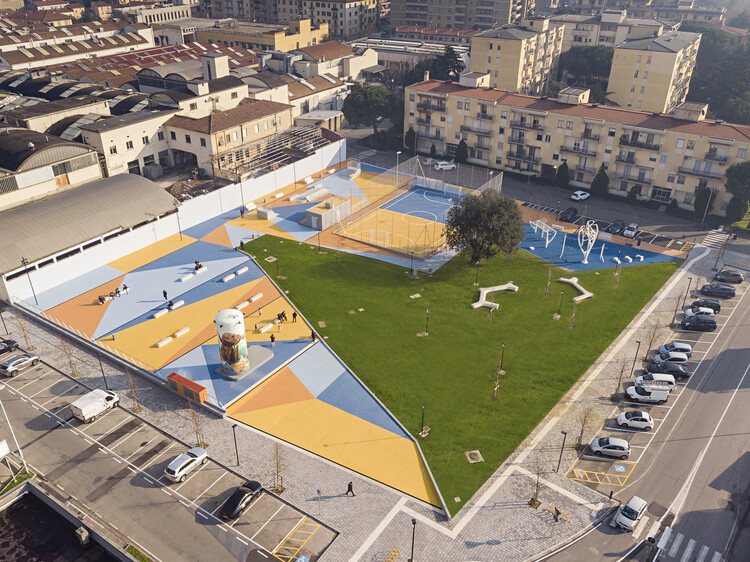 Text description provided by the architects. The Playground MacroLotto Zero Prato is one of the main reuse interventions planned in the broader urban regeneration project “P.I.U. Prato”, involving the area of Macrolotto Zero, a “factory-city” urban fabric, a territory highly exploited for residential and productive purposes, with no public spaces or services.

Since the city’s production system began to undergo a decreasing path, the neighbourhood has witnessed the progressive abandonment by its citizens and businesses and the simultaneous settlement of the Chinese community, which has found in the area’s functional mix, the optimal conditions to live and work. The “P.I.U. Prato” project, financed by the European Community and the Municipality of Prato, set the goal of redeveloping the area of Macrolotto Zero by implementing urban and social regeneration policies, transforming it into a socially and economically lively area, through a series of operations focusing on the same common denominator, the public space.

The project included the recovery of ex-industrial buildings and their re-functionalization to host new social and cultural activities - such as a Medialibrary, a Coworking space and a Metropolitan Market - the regeneration of outdoor areas and green spaces and interventions of sustainable mobility. The Playground is the largest public space in the whole project, built on a place previously used as an illegal car parking and storage area for the abandoned industrial complex. The area itself represented a unique opportunity, despite its lack of features, except for the water storage silo, the space represents a strategic hub for a wider urban redevelopment in addition to its connections with the new public spaces system in progress in the area.

The project consisted of combining a reuse approach with a respect towards the area’s consolidated structure and complex essence, transforming the existing environmental and planimetric features and limits into resources, with the goal of converting an anonymous and isolated space into a new urban landmark, univocally recognizable in its artistic and architectural traits, able to stimulate a sense of community and belonging in the population, creating a place of social aggregation and free expression. The whole square is characterized by a strong presence of colours, divided into segments for each functional area, providing dynamism and character to the paved surface. The visual zoning aims to create a contrast with the adjacent green garden areas, and so implementing two different integrated functional sub-systems, able to enhance each other and their differences and potentials.

The area’s characteristic colors also become the artistic component in the new artwork created by Zed1, a well-known street artist who intervened on the surface of the silo, that recalls the multi-ethnicity of the neighborhood and the city, sending a message of solidarity and unity to face the future.

The opening of the area to the public gave important feedback regarding the expected transformation. The high rate of attendance and satisfaction among the users in the various age groups points out that the project has achieved the urban and social redevelopment objectives set by the Municipality during the initial planning stage. 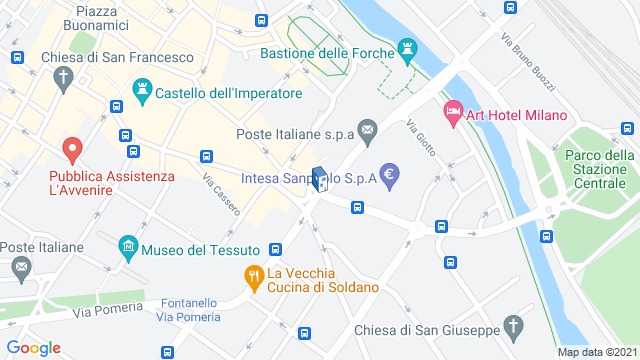 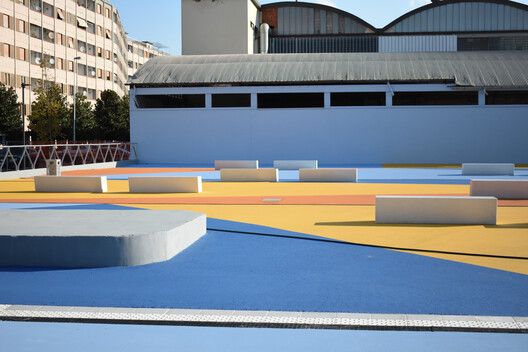 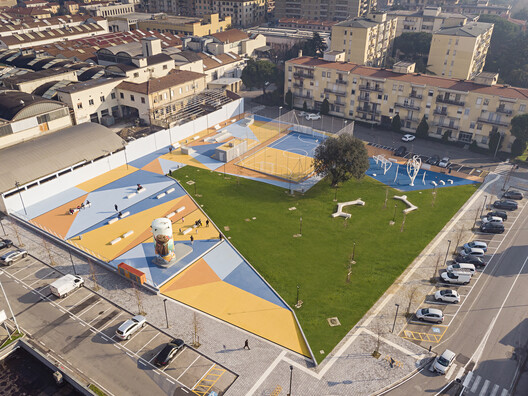