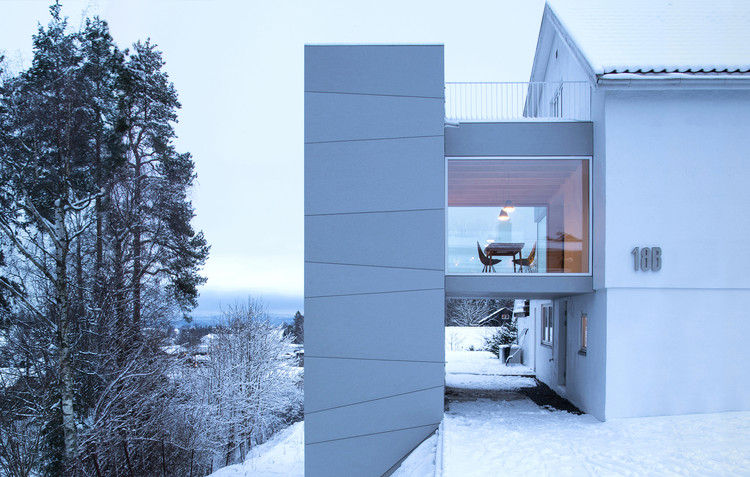 Text description provided by the architects. In 2019 we were contacted by a couple who had just given birth to their third child, and who wanted to increase their living space by adding an extension to their half of a semi-detached house in Oslo. The existing house was located on top of a slope running through an area rich in pine trees, and the site had great views towards the south. We realized early on that locating the extension on the southeast end of the existing house would allow for utilization of the view, a clear connection between existing and new, and rational internal logistics. There was one big challenge though; the municipality had specific requirements for the amount of usable outdoor space on each plot, and our site did not meet these demands.

So; in order to get a building permit we would have to find a way to make the extension itself increase the amount of outdoor space - a challenge that was something of a paradox; how do you establish a larger outdoor area simultaneously as building on existing outdoor areas… The solution was to place the extension on the slope. This way we could replace an area that was too steep to be defined as outdoor living space with one that met the criteria; a roof terrace on top of the extension.

The positioning of the extension on the slope also made it possible to fulfill a couple of other wishes from the family; connecting the existing house to a lower garden on the bottom of the slope (an area that had not been used because it was perceived as inaccessible), and integrating a carport under the new structure. We wanted the extent of the narrow slope to visually define the width of the extension, and we wanted the structure to have a distinct vertical appearance - meaning we had to enhance the perception of «high and narrow» - without compromising on functional aspects.

This was achieved through a couple of different measures; the facade of the second floor «bridge» is pulled back and opened up to allow for the vertical «tower» to stand out, the ground floor (which extends under the carport) is made visible only at the base of the tower, and the railing on the roof terrace is made dense where it makes up the top of the tower. This logic applies to both ends of the extension, while the south-east facing facade has large windows that capture the nearby pine trees and the horizon behind them, and shifts inwards so that the width of the end facades can be kept at a minimum. The main entrance was moved to the first floor of the new structure, utilizing the mid-part of the tower and the narrowest part of the extension.

From the entrance hall, a staircase leads to a studio apartment adjacent to the lower garden below and to the main living space above. Here a new dining room occupies the bridge, while a large opening in the wall of the existing house connects old and new. The main living spaces span across this storey, where window openings from floor to ceiling provide varied views that include both the nearby area and the Oslo Fjord further away in the distance.

A second staircase inside the existing house provides access to the upper level of this building and to the roof terrace on top of the extension. We wanted a facade material that was able to enhance both the shape of the tower and the details around the windows on the east facade. Glue-mounted fibre cement panels were chosen for their ability to be precise, non-reflective, and subdued in their expression - qualities we felt would complement the slightly rougher mortar wall on the existing house. The interior of the extension was designed to represent a warm contrast to the exterior, and consist of short-traveled Norwegian wood in the form of load-bearing structures in spruce, walls, and stair railings in birch plywood panels, ceiling-slats in aspen, and floors/stairsteps/doors/windows in pine. 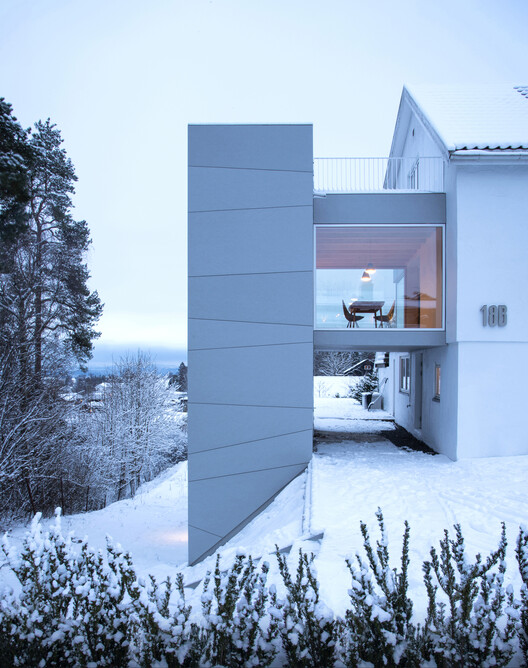 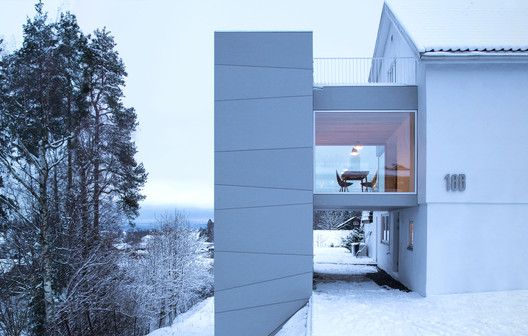