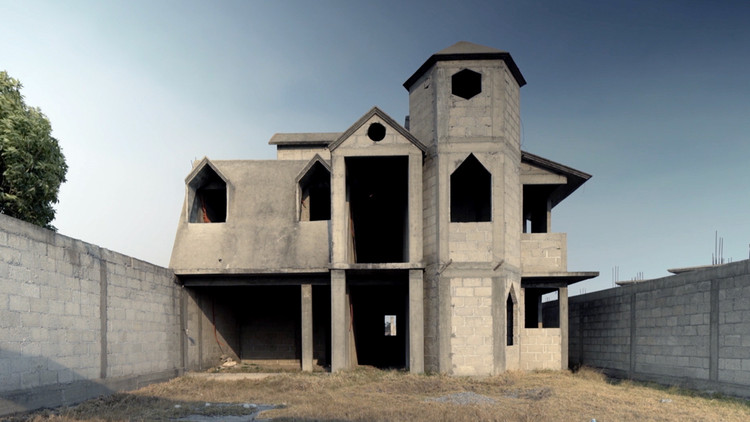 “Abandonment Copies” is a research project created between 2016 and 2018 by artist Sandra Calvo consisting of a film, archives, drawings, interviews, and a video display which was exhibited in the Mexican pavilion during the 2021 Biennial of Venice. The project highlights architecture as a reflection of the migration process between Mexico and the United States, comparing and contrasting the houses where migrants work in the US and the ones they build in Mexico with the remittances they send.

The project pays tribute to the constant struggle to build a place to call home as seen in the journey countless migrants take to the United States to live and work in precarious and illegal conditions while saving up to build their own mansion-inspired villas that border on fantastical. In spite of the progress made in recent years, informal migration to the US is still marred by both inequality and violence. To date, Mexicans continue to make up the largest percentage of foreign born migrants living in the United States and the cultural bridges they form with their newfound communities are increasingly visible.

As the project shows, in the US state of Wyoming, 80% of the Latino population hails from the Mexican state of Tlaxcala, specifically from Hueyotlipan municipality. This is a trend across the Mexican diaspora in the US, with people from Puebla overwhelmingly settling in New York and people from Tulancingo in Salinas, California, just to name a few.

The project highlights the similarities and differences of life in the two countries, including individual aspirations and raw realities, and how architecture ties into these factors, simultaneously shaping and being shaped by the context surrounding it. The project is divided into three parts:

No specialists are involved in designing these houses. The design and construction is solely in the hands of the future inhabitants and the artistic liberties taken define the resulting structure; however, the lack of architects doesn't equate to a lack of architecture. The process is based on the possibility of modification and self-construction. The spaces remain open to the point that it's difficult to tell whether the house is in the middle of construction or abandoned. Construction proceeds according to the intuition and aspirations of the inhabitants.

The idea of a house that may never be inhabited, but whose construction serves as a source of motivation and pride, serves as an escape from the harsh realities faced by its inhabitants. It represents hope for a better future. This phenomenon is mirrored throughout the country in the architecture that springs up in response to the socioeconomic realities faced by the populace. They are reflections of abandonment,  of a territory, of a family, and of a dispossessed landscape.

The project includes various personal accounts from migrants, including that of Abraham Hernández Bautista. This is just one of many stories about the search for a better tomorrow as seen in home-grown architecture.

Sandra Calvo is a visual artist based in Mexico City.