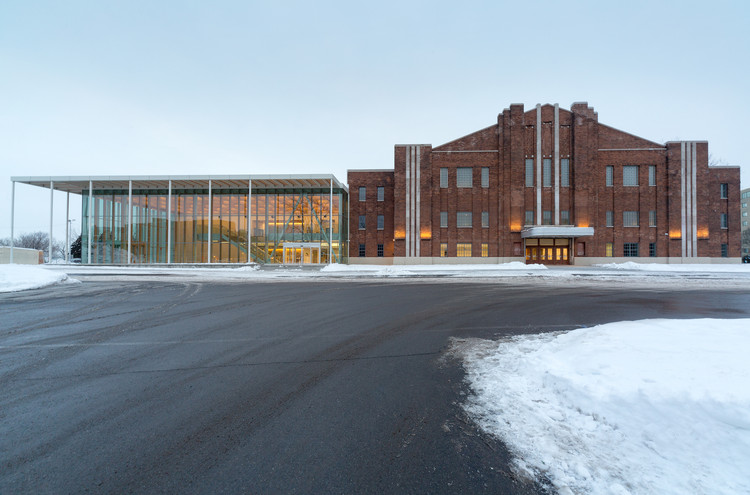 Text description provided by the architects. The major transformation of the Verdun auditorium and the Denis-Savard Arena is a project to completely rebuild the Denis-Savard arena and revalue the historic architecture of the auditorium by peeling off its metal envelope while modernizing the interior of the complex.

The intervention attempts to create a dialogue both temporal where the ancient meets the modern and geographical, where the River borders the city. Thus, the meeting of the architecture takes place in an emblematic axis of this double dialogue, the foyer, from where it is possible to observe the two ice simultaneously while circulating from the city to the river.

The project also aimed to equip the complex with a new energy-efficient refrigeration system as well as obtain LEED Gold certification. Among the various strategies used, we note the reduction of water consumption in the operation of the arena, the efficiency of the mechanics, and the construction of a high-performance envelope for Denis-Savard.

Concept. The iconic Verdun Auditorium is located at 4110 LaSalle Boulevard, on the banks of the St. Lawrence River right by the Verdun urban beach at the convergence of three significant roads in the borough: Avenue de l'Église, LaSalle, and Gaétan-Laberge boulevards.

Its location on the river and in the historic center of the district makes it one of the most important landmarks of Verdun. It is one of the many recreational and cultural facilities located along the Saint-Laurent river including the Arthur-Therrien pool, Verdun urban beach, Verdun Natatorium, and the Saint-Dizier Nivard House. It is also part of the civic facilities of the former municipality including the parish complex of the church of Notre-Dame-des-Sept-Douleurs, the Verdun Hospital Center, and the current Verdun borough council. The surrounding area is mostly residential except for a few shops scattered on Avenue de l'Église and Boulevard LaSalle. It is a typical district of Verdun in that it’s composed of rectangular islets with an alley.

Inaugurated on November 28, 1939, the Auditorium of Verdun is an atypical building. It boasts a rich history in sports and cultural heritage of the Verdun and Montreal residents. Its frame, built in the early 20th century, is made up of adjoining duplexes and triplexes in clay brick, and more recently, housing towers. The original Verdun Auditorium has architectural qualities that make it a good Montreal example of the Art Deco style, characteristic of the 1930s. Used from the end of its construction by military authorities during the Second World War, it opened its doors for hockey and skating in 1946. It was home of the Verdun Maple Leafs, in which Maurice Richard played in his early days, as did the Montreal Canadiens before the construction of the Bell sports complex in Brossard. In addition to Maurice Richard, famous hockey players such as Denis Savard, Pat Lafontaine, Mario Lemieux, Claude Lemieux, and former coach Scotty Bowman have graced its halls.

With a seating capacity of nearly 4,000, the Verdun Auditorium became a venue for important political events (the 1980 and 1995 referendums) and rock music concerts (Bob Dylan, Nirvana, The Cure, Pearl Jam, and Iron Maiden). The auditorium left an indelible mark on the citizens who frequented this emblematic place during their youth.

Over the years its facade has been covered with metal siding and a second rink, the Denis-Savard arena, has been added. The mandate the FABG architects were given involved the demolition and reconstruction of the Auditorium, preservation of the Denis-Savard arena, and a complete upgrade and replacement of the Freon refrigeration system, an environmentally harmful gas while aiming for LEED Gold certification.

Rather than destroy the historic landmark, FABG architects proposed the enhancement and restoration of the auditorium and the demolition & reconstruction of the Denis-Savard arena by arranging between the two a foyer from which it is possible to observe the two rinks from the city towards the river along the axis of a new urban beach. The asphalt surfaces around the building were reduced to promote a better relationship with Parc J.-Albert-Gariépy and the ecosystem along the river.

The public spaces feature a cross-laminated timber roof chosen as much for its contribution to carbon sequestration as for its contribution to the definition of a simple and robust architectural language for these spaces. Particular care has been taken to restore and maintain the character of the interior spaces of the auditorium. This was accomplished by restoration of the original masonry facade and of the wooden benches, which are complemented by the mixed structure (wood and steel) of the roof. 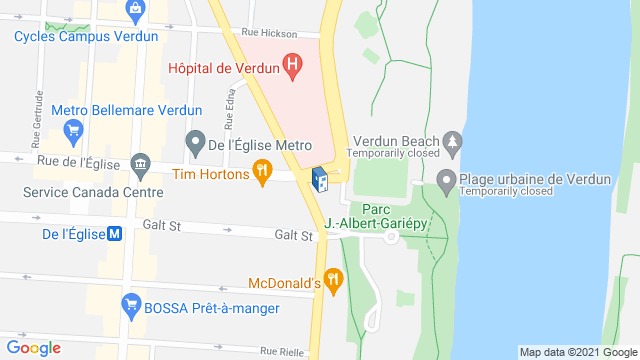 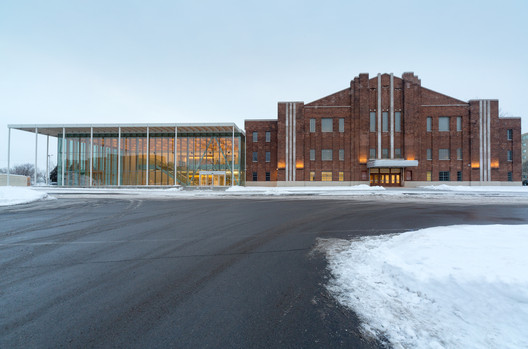