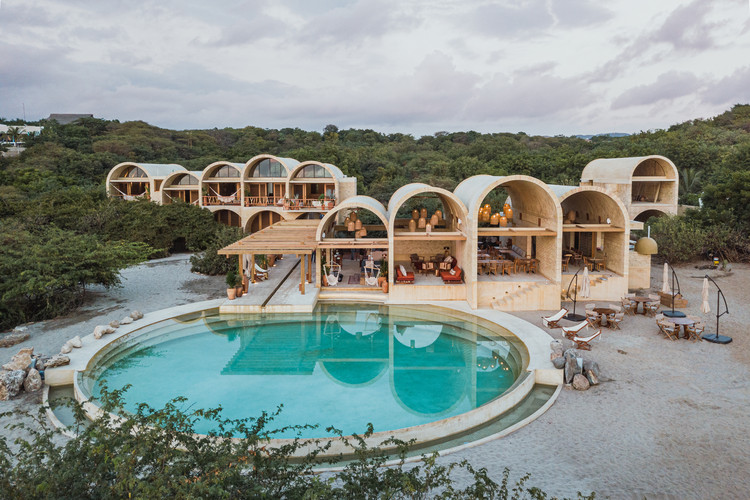 Text by Mónica Arellano. Located in front of the Pacific Coast and immersed in the landscape of La Barra de Colotepec, in the state of Oaxaca, Mexico, and designed by the Mexican architect Alberto Kalach, Sforza House develops from the idea of being aware of the environment, the contemplation and respect for the environment that is described as a “(…) place on the Oaxacan coast –where the delta of the Colotepec river converges with the sea– the sabines, the mangroves, the tulles and the oaks embrace this exuberant refuge to privilege a reunion with the essential and natural beauty without artifice. "

The building consists of three volumes that connect with a corridor where a thin concave line passes. It guides the visitor towards a moon of turquoise water that descends four steps. These volumes are made up of ten vaults that face the Pacific Ocean, granting spectacular sunsets in reddish tones and facilitating double or triple heights as well as correct air circulation, the coast of Oaxaca being a site with a tropical climate where the annual average oscillates 20ºC.

Both interior and exterior spaces are designed integrally following the general concept and earthy tones where the partitions and coatings made in the region seem to be created from the coastal sand. On the other hand, concrete and wooden beams intersect the volumes to play with the different heights that allow interesting moments of contemplation at different levels, in different atmospheres generated by the temperature of the site, the solar path, and the visual and acoustic experience of the movement of the waves.

A custom-made wooden gate is applied to each archway with small blinds that provide privacy without completely obscuring the view of the landscape, and that also allows air circulation to create a more pleasant climate inside each of the eleven rooms, divided into junior, senior, and master. Fixed furniture such as sinks and bathtubs give the impression of having been carved on-site, as if the building, in general, was a stone found in situ and sculpted to be inhabited.

On the other hand, as entrepreneur Ezequiel Ayarza Sforza, owner of Sforza Hose, points out: “The interior environments are made up of pieces from regions recognized for their artisan crafts, such as rugs from Teotitlán del Valle, textiles from the Oaxaca Valley, hammocks, chairs and curtains from Yucatán and palm lamps from Veracruz, which are combined with decorative elements and amenities from the Oaxacan mountains, where they are made by potters, cabinetmakers, farmers, and beekeepers, in the Pueblo del Sol workshops - a project of sustainable production, where the continuity is possible thanks to the contributions and support of Casona Sforza."

Being this a project designed in an integral way, an emphasis is placed on the gastronomy of the site which acquires an important role reflecting an ecological and social responsibility. This is why Sforza House is committed to a culinary proposal based on the farm-to-table principle, guaranteeing the freshness of the ingredients of each dish, which come from the orchards of local producers that respect the seasonal and non-intensive harvest cycles. 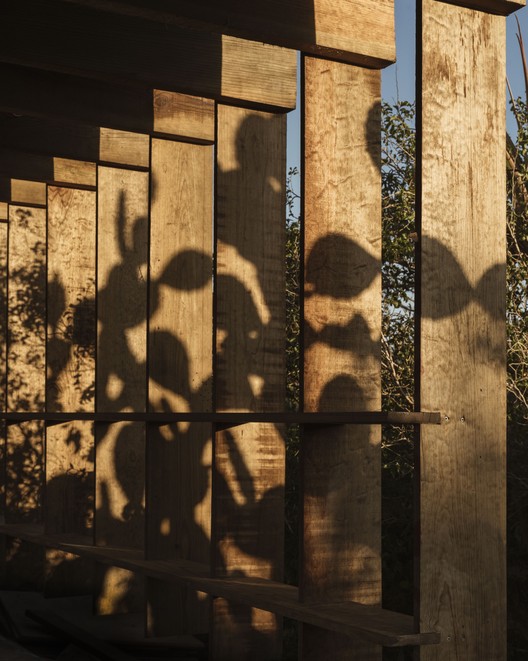 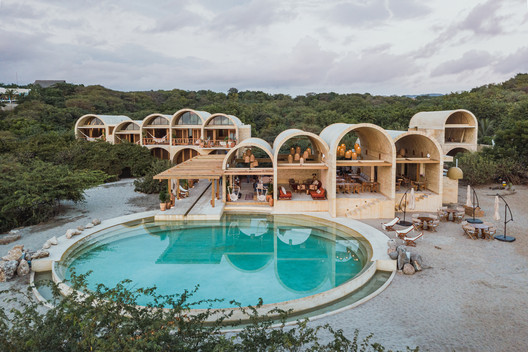