Save
Burgos & Garrido to Design the Nervión River Park in Barakaldo, Spain
Share
Or
Copy 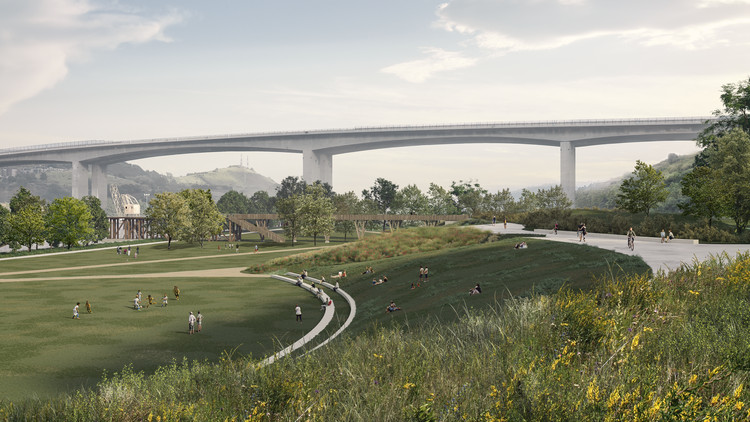 The winners of the design contest for the Nervión Riverside Park in Galindo Este (Barakaldo, Spain) have been announced. Organized by BILBAO Ría 2000, the competition invited participants to submit proposals for a space along the banks of the Nervion River that Baracaldo residents could utilize. Currently, the majority of Galindo Este (Urban-Galindo) is developed, however, space along the riverbanks provided a number of opportunities for growth. The goal of the contest was to lay out an integral design that would blend with and build on the already-existing space around it.

The winning proposal was presented under the title "The Moving Garden" by the Burgos & Garrido Arquitectos firm. Their design builds on a 9-hectare (22-acree) outdoor space and is projected to reach completion by 2023.

Official description: Dársena de Portu, the area of Barakaldo where the Nervión River Park will be built, is a largely undeveloped sector that contains traces of the area's history. A railroad runs through its southern section while the eastern slope of the Arrontegi hill runs into a large artificial plain that once housed several industrial facilities. It's a somewhat faded place but one that holds great beauty. One simply has to take in the views looking over the river and wild landscapes to understand the potential found in this area.

The projects aims to highlight both the high and low points of the landscape and eliminate the divide between them using an artificial topography that will link the riverbank with Barakaldo's eastern edge. The park will contain three sections: a] a large wooded terrace with views of the city along the riverbank; [b] a hillside covered with native, wild vegetation; and [c] an extensive open field with walkways and space for an array of activities. There is a soccer field, jungle gyms, space for kite flying, a picnic area, and several lookout points allowing guests to enjoy the space in a variety of ways.

The park's trails and paths intertwine with the urban and suburban routes and extend northwards to the Ruta de la Costa Vasca and to the Galindo River Park. To the south, they link to the route from Lutxana, and access a pedestrian and bike path that skirts Barakaldo.

Of course, the project is an open proposal. Its creators don't want to determine or limit its uses and hope that it will serve a myriad of purposes for the surrounding community. It's a sustainable concept and takes care of the resources it utilizes with its low-cost, low-maintenance approach to the spaces that house it. It emphasizes efficient water management and keeps its energy consumption low. It offers something for every age or socio-economic demographic without dividing these groups. It truly is a park for all.