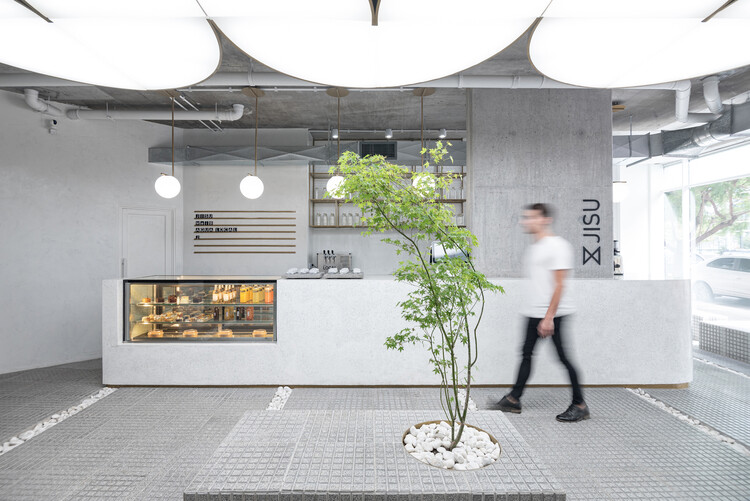 Text description provided by the architects. The project was designed as a single space with quickly perceived simple lines, with pure geometries in harmony with neutral tones, stone materials, specific vegetation, and a central sculptural piece as the main lighting element. It was developed alluding to the squares of Buenos Aires, where some elements of the national and eastern culture merge with the aroma of coffee.

The site had to be endowed with a certain versatility to be able to accommodate future situations and uses that might not have been considered from the beginning. The proposal was to create a harmonious and simple space, where different uses and functions can be carried out. JISU arises from the idea of creating a brand in relation to a dynamic space, where the uses and the gastronomic offer, as well as the public and its scope, can be transformed over time, generating a multidisciplinary space, always accompanied by a rich specialty coffee.

To achieve the reminiscence of the public spaces of the Buenos Aires centre, a decision to use one of the most seen tiles in all the squares and sidewalks of the city was made: the 64-sided tile. In this way, the visitor could subconsciously relate the sensations generated when walking on this floor to experiences that have taken place in public spaces in the open air of the city.

To emphasize the character of the square, no furniture as mobile pieces within the premises were added. Instead, benches were designed, as they are presented in the public spaces of the city, resulting in the appearance of tectonic banks, flowerpots, support sectors, and a bar. In this way, a module would appear that would configure and spatially diagram the entire project, the 40x40 cm module (size of the 64-piece tile). This pattern is present in all cafe sectors, generating a relationship between all the elements that make it up, seeking a spatial harmony governed by geometric patterns, some visible and easy to understand, others more hidden.

Another referential element used in the central Buenos Aires squares, such as Plaza de Mayo, are the golden lanterns decorated with spherical or oval lamps. From these pieces of historic urban infrastructure, the golden colour and spheric shape were incorporated into the project. The spheres as a pure geometric figure were used to design the lighting of the bar, obtaining an artefact of simple lines with a total height of approximately three modules (120 cm), with a sphere with a diameter of half a module (20 cm), separated from each other with a distance of two modules (80 cm). The built-in golden colour of the streetlights, which is also highly visible in and quickly linked to Asian cultures, was the colour of choice for all the details of the cafe, such as baseboards, blacksmithing, light fixtures, and more.

The general spatial layout of the premises is governed by the constant link between the monolithic bar and the successive floor sectors that accompany it. Each floor sector is equivalent to a strip of a width of four modules (160cm), which could be imagined as elongated planes that fold at right angles, thus forming the different types of benches and flowerbeds in the allegorical square. Each of these strips reflects and complements the different uses of the bar.

In total eight successive strips of floor can be distinguished, perpendicular to the main axis of the bar, designed like carpets or planes of a width of four tiles, which are folded at 90 ° degrees to configure the system of benches, supports, and flowerpots. Each of these strips is separated, one from another, by a strip of round white stones. This strip fulfills several functions, in addition to allowing distinguishing the successive panels of four modules (160 cm). Each of these furrows is a four-meter linear gutter, each connected to the others, designed to guarantee good drainage and cleanliness of the premises. The selection of the round white stone connects us intuitively with Asian cultures, but at the same time, it stops the rhythm of our walk due to the change in the materiality of the soil, slowing down the speed of the usual routine, making us observe and contemplate the surrounding environment.

The central sculptural artefact is the work of artist Paul Sende. Space was opened by the architect to promote multidisciplinary work within the project, encouraging the idea of sharing and combining knowledge and disciplines, showing how different branches of art can live in harmony in the same space enriching it.

The artefact is made up of twelve concatenated quarter-circle-shaped modules. The diameter of these circular pieces coincides with the modulation of the floor panels, generating a geometric link with the genesis module of the cafe floor. The artefact of curved lines stands out for its morphological composition, contrasting with the rigidity of the right angles of the space that contains it, but at the same time, it maintains a geometric relationship with the surrounding whole.

All its modules are programmed and connected to each other, achieving a static lighting position with adjustable power, plus a total of six different lighting sequences, resulting in a very attractive movement of lights, which at times manages to recreate the passage of clouds under the sun, moving us to a possible situation experienced outdoors. 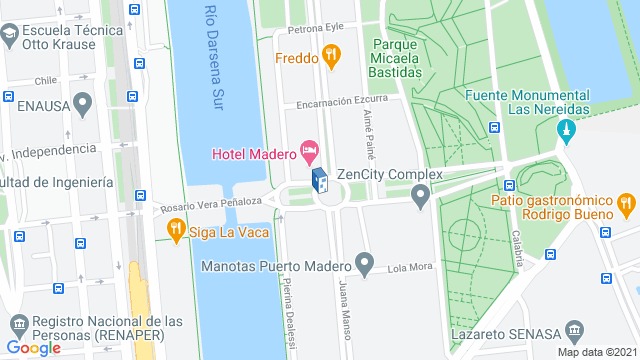 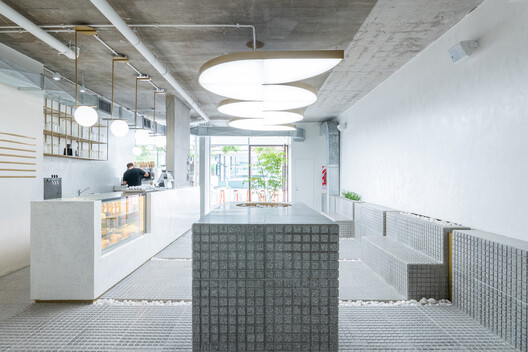 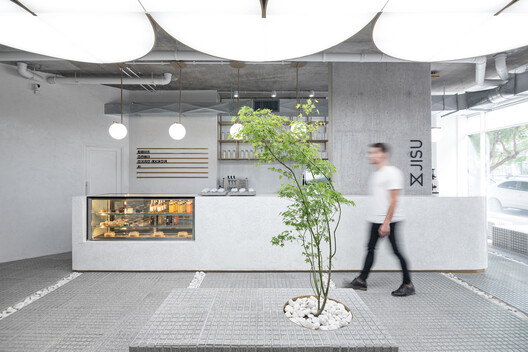