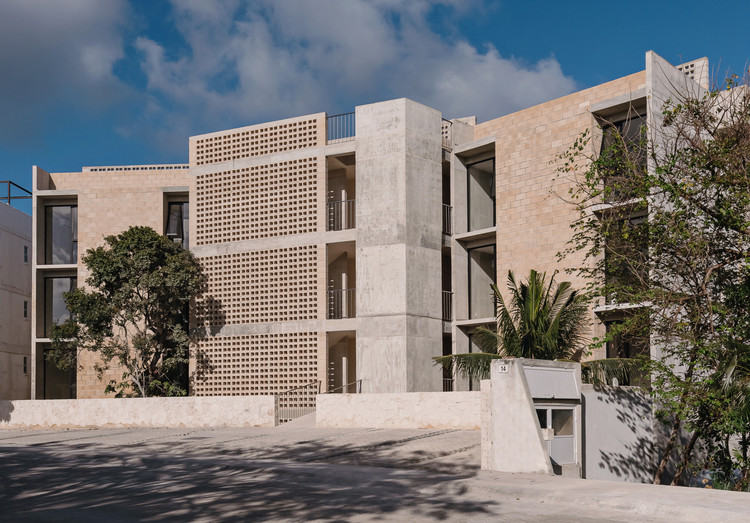 Text description provided by the architects. In a previously impacted 1,019.54 m² plot with frontal and lateral constraints, a fragmented building was proposed consisting of three volumes that responded to three main factors. The first one, to the trapezoidal geometry of the property, the second one to the surviving trees of the work previously done on the site, and the third one to enhance the views looking out from the property.

The 4 meters difference between the street level and the site level already present on site was used as an excuse to be able to build four levels instead of the three that are usually allowed which greatly increased the value of the project.  To the front, a permeable paving stone plaza functions as a parking space and allows rainwater to infiltrate the soil below. A narrow bridge connects the plaza to the main building thus creating an interior lightwell/patio that carefully respects the existing trees and illuminates and ventilates the adjacent apartments in the lower levels.

The proposal is divided into 3 volumes, the two side volumes are symmetrical and the central one opens like a fan towards the jungle. The exterior facade is discreet and solid to be able to maintain a certain level of privacy towards the street and to soften the rigidity of the walls a block-lattice was placed in the staircase; This at night is intended to function as a lamp illuminated with warm light. The rear façade is made up of balconies that end in a narrow slab edge.

The natural material finish was left untouched so that the building ages with dignity and with as little maintenance as possible. A strict logic was used for material placement using only one direction for concrete and the other for cinder block giving each hierarchy and purity. On the lower level, a long rectangular pool with views to the jungle was proposed, while the private amenities were placed at the roof garden level. The side units have stairs to the outside to avoid an overhead structure and save space inside.

Below the parking lots is the mechanical room and water tanks with the necessary preparations to harvest and purify rainwater. The geometry of the building itself allows for each unit to have its own corridor, thanks to this, and as per client request, the apartments have 2 doors, one for main access and another to a room that the owner can rent independently as a hotel room. The central unit, having the room facing the jungle, has a wooden lattice door to control the access to the terrace in case the second bedroom gets rented. 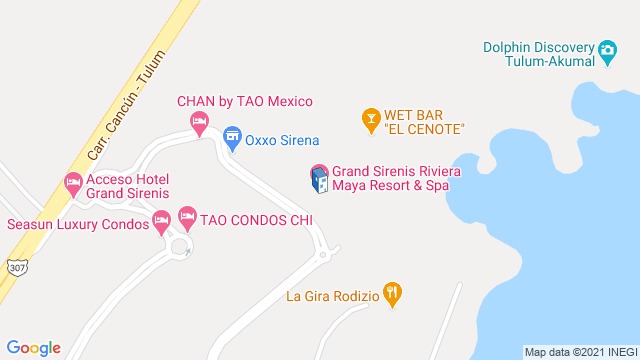 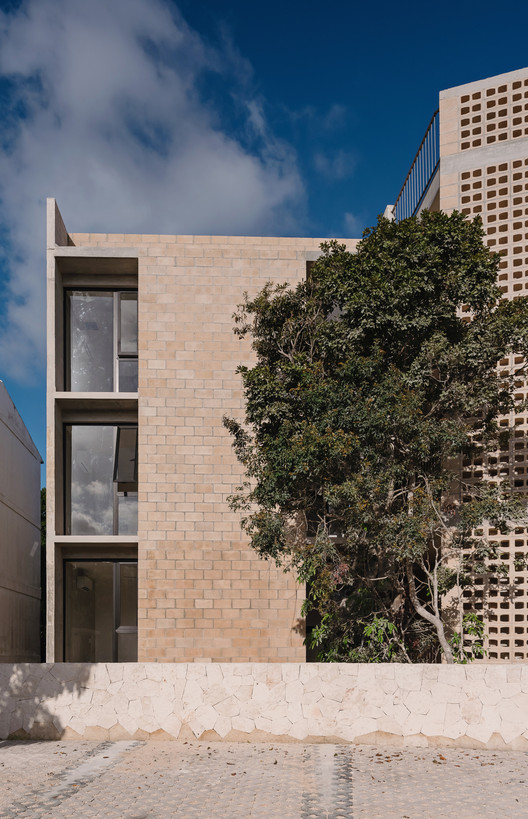