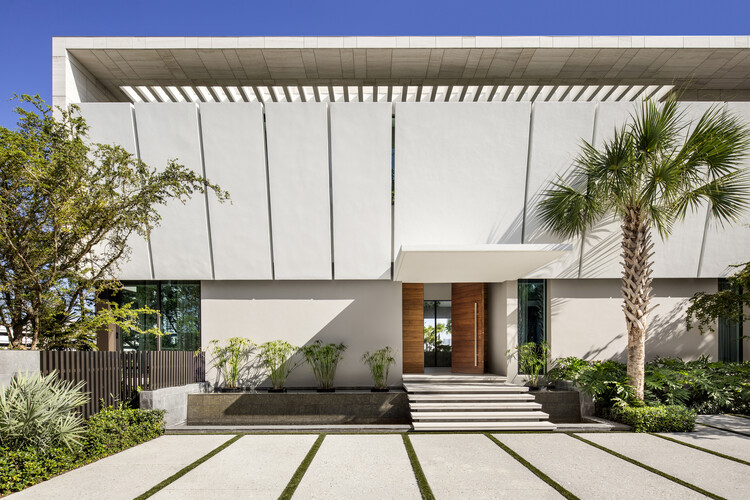 Text description provided by the architects. The character of this four-bedroom family home in Miami, South Florida, designed by SAOTA, arose largely through an engaged creative response to its distinctive setting. The house is located on a pie-shaped lot in the city of Golden Beach, an affluent and exclusive small municipality on a narrow strip of land between the Atlantic Ocean on the east and the Intracoastal Waterway to the west.

The site, at the end of a cul-de-sac, features spectacular views up the wide span of the Intracoastal Waterway to the north-west and unusually extensive water frontage along its radius edge. The house has been positioned near to the boundary line towards the back of the property to maximise waterside frontage. SAOTA chose a layered approach in which the house mediates a progressive experience that unfolds between a muscular, monolithic protective screen of concrete panels presented to the street and a light, transparent treatment on the façade facing the waterway.

The transition from its bold public presence on the street through the gallery-like interior (offering tantalising glimpses of the water beyond) is intensified by the weighty threshold of the house. The internal spaces then advance by degrees towards the external spaces, becoming lighter as the architecture opens towards the view. This experience extends all the way to a cantilevered deck at the water’s edge that facilitates boat access. A spine along the eastern property line accommodates a kitchen and back-of-house functions including a gym.

From it, three “fingers” stretch out at right angles in the direction of the waterway, accommodating the living rooms and a series of shaded terraces that peel away from the outlook. On the top level, the fingers accommodate bedrooms, which also step back so that each room upstairs has an uninterrupted view of the Intracoastal. This fragmented scheme not only responds to the water’s edge and the vistas beyond, but also breaks down the building mass, allowing the landscaping to interrupt the plan and natural light to flood into the rooms to compensate for limited southern light.

This porous arrangement also creates a rhythmic series of landscaped outdoor “rooms” and covered outdoor terraces that support the kind of indoor-outdoor relationship appropriate to Miami’s waterside lifestyle and climate. The lightness and delicacy of the interiors is articulated on the water-facing façade with a series of bead-blasted brassy laser-cut perforated aluminium screens, which contrast with a palette of stucco and unfilled travertine (as a nod to Floridian coral stone). Lush emerald plantings of broad leaf Alocasia California and cascading Railroad Vine – including roof gardens – integrate the contemporary building with its setting. The interior architecture has been kept unfussy and simple to allow the owners’ extensive collection of contemporary art full expression. This gallery-like approach to the interiors complements the protectiveness of the street-facing façade, imparting a quiet, introspective character to the house. The central gallery is animated with artworks by the likes of Nick Cave, Fabio Viale and Yinka Shonibare, among others.

Elsewhere, works by Vik Muniz and Richard Long feature prominently. In a few instances artwork and architecture are fused, such as the untitled circular Richard Long mural in the lounge, and a once-off edition of a graffiti-based artwork, Made in Heaven/En Plein Air in Hell (My Beautiful Dark & Twisted Cheeto Problem) #5, 2015 by Parker Ito, which has been used to wallpaper the gym. SAOTA’s lifestyle-driven approach to contemporary design plays out not only this home’s engagement with its setting, but also through its tactile finishes. A simplified palette of materials including travertine, walnut and quartzite has been used consistently in warm tones throughout the entire home, grounding the architecture and enhancing the home’s relationship with its setting by making it seem almost like an extension or extrapolation of it setting rather an edifice set up in opposition to the elements.