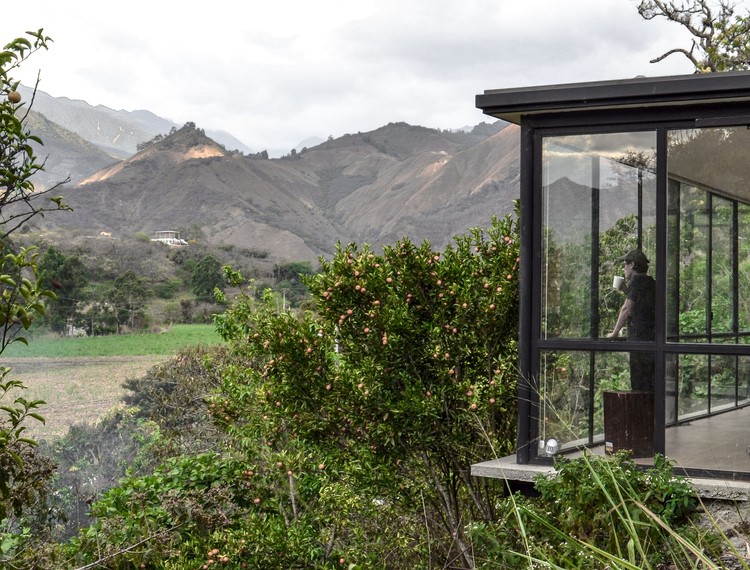 “From order, I will extract creative force and the power of self-criticism to give shape to that unusual. From there Beauty will be born. " Louis Kahn. Design and Form

Casa Dos Guaduas, is an exercise in architectural composition that operates on different spatial scales, whose objective of synthesis approaches the practice of architecture against all possible arbitrariness.

Its location, analogous to the sanctuary of Delphi, colonizes the place, a terrain with steep slopes, through the formation of embankments with an undulating profile. The architectural element follows a rigorous metric arrangement and structure that is inserted into the place using simplicity, function, and order.

The house is structured in a long and narrow strip of an intentional geometry connected to its context, using local materialities, such as brick, wood, and tile, which together with concrete, metal, and glass are used to constrain the object. The house is hardly spotted, with the brick wall being the first thing that catches the eye, arising from a platform that stands on the filling of recycled tires. This wall also contains furniture, counters, bathrooms, facilities, etc., acting as a boundary between the topological external and the metric internal.

The wide threshold in the brick masonry welcomes us and separates us from the exterior, articulating three architectural elements that have an elemental character:

The hall, a covered and closed space, making up the residence itself. The patio or enclosure that due to its fragmented nature becomes more of a terrace; an uncovered space that allows one to scan the landscape, and the porch or portal; a covered and open space, that catches the shadow, destined for the contemplation of the horizon. We must note that they are parts of a whole of spatial units that are made up of limits, each in charge of constraining a direction of space. They can be distinguished by the wall as a horizontal limit, the ceiling as a vertical limit, and the floor as a limit given a priori. It is a minimal house that enhances the place, a belvedere house, conceived as a refuge that amplifies the landscape, it is a house whose roof, parallel to the plane that supports it, establishes a horizontal vision, with a transparent facade plane that makes it possible for the interior space to join the infinity of exterior space, towards the distant background.

On its front facade towards the access road, the house presents a brick wall whose only opening is the access threshold to the interior of the belvedere box. Above the wall, there is an apparently flat “tile roof”, whose slope is hidden between the metal beams that sit on the wall. The construction of the form is the methodical and rigorous result of the skillful handling of the elements and their relationships, which are not the fruit of the imagination or creativity of the workgroup of the house "Dos Guaduas", but of the great masters who preceded our work, Coderch, Breuer, Mies, Wright, Kahn and the solid, proven and forceful vernacular architecture. 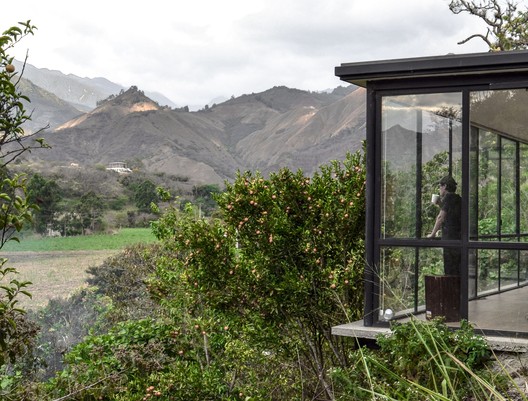