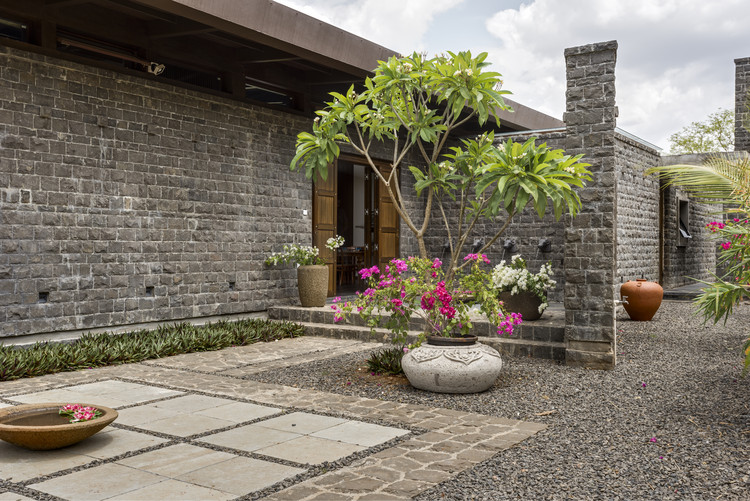 “We want to go back to nature!” was a simple brief given to us by our esteemed and lively client couple. For them, this was a conscious step to cut off from the urban clutter and experience absolute solitude. Staying true to their brief, our response was an unimposing structure tailor-made for the beautiful serene site. The site is a hillock on the outskirts of the city of Pune, India with panoramic views of the city and mountains.

The owners of this house who are descendants of one of the aristocratic Maratha families had envisioned a serene precinct which would take them back to their cultural roots and closer to nature when they set out to build this second home. This was our primary reference for designing the house. Pune was a seat of major political activity of the Maratha Empire around the 18th century.

The city has various historical and architectural marvels such as hill forts, palaces and residences called ‘wadas’ which have a distinct architectural style with elaborate stone and brick structures, intricately designed openings, splendid arches and doorways. All this gets reflected in the architecture of this house to fit it aptly in its context. Stone was used on the façade as a response to the visual imagery of the heritage structures in the city while the sloping roof was demanded by the heavy rainfall which this area experiences in the monsoon season.

The house is a compact composition of intricately detailed spatial experiences, a contemporary interpretation of vernacular domains. The linearity in planning is complemented by dynamism in the form. The begins at a court with a minimally designed deepstambha (light lantern in stone) and frangipani marking the sense of arrival. The arrival area has a stone paving in an interesting grid pattern.The raised arrival area is characterized by a sculpted ‘goumukh’ (gargoyle) water feature. The angular wall is juxtaposed with the grid structure for a sense of direction.

The introvert arrival space opens up into an expansive living space looking onto the panoramic views. The living room flows outwards in the form of a deck, blurring the line between the interior and the outdoors. The bathroom extends into a private toilet court acting as a thinking space. The uppermost level of site development has a service tower which includes the water tank with solar panels above it and an ancillary space acting as a store room and a space for electrical and automation panels.

Looking at the challenging site conditions and sensitive client brief, a composite construction system has been formulated for this project. The system consists of three different materials and techniques viz. steel columns and roof members, load bearing composite walls and RCC cantilevered slab. Advantages of all these materials have been articulated to form an innovative structural system.

There are three levels as a part of the site development; the lower-most level at which the site is entered, the level of the house above it and another level above the house which has a large kitchen garden. There is a series of steps to access this kitchen garden from the house. Various indigenous plants and trees have been planted here which include fruit-bearing trees to attract birds. A variety of grasses have been planted to add a sense of softness and flow to the rustic look of the stone walls of the house. 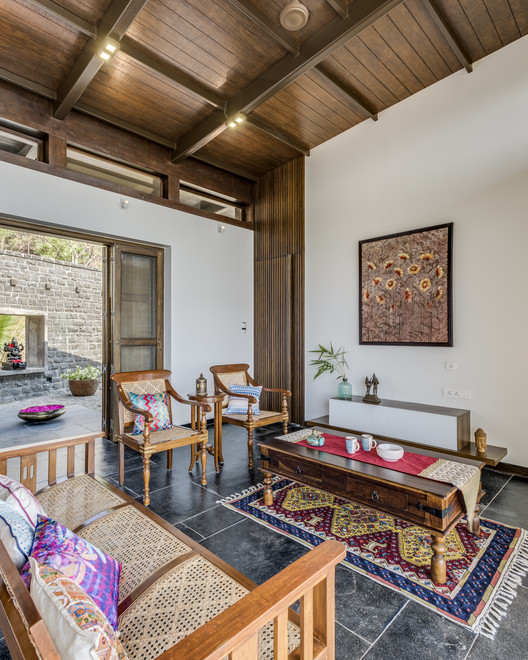