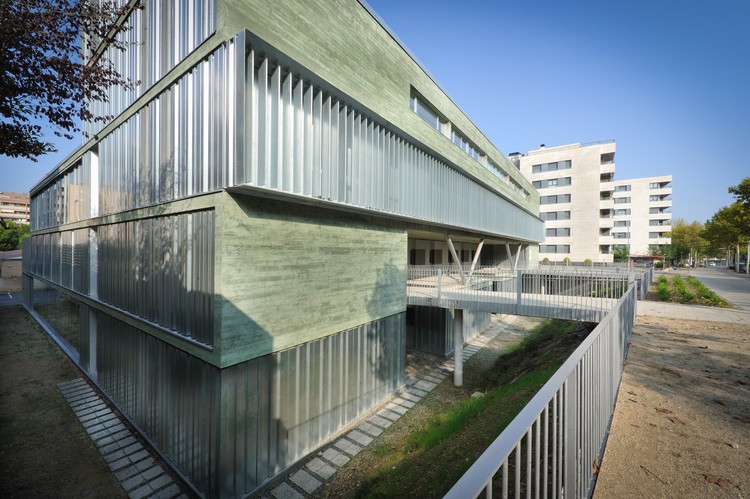 Text description provided by the architects. Location. The plot is located in an area of new expansion of the city, next to  to residential buildings of a certain height (PB + 7PP) and the two perimeter bands, leaving the central strip of the island for equipment. In this strip, is located the center “Aremi” and facing the 11th of September Street , the new sanitary building. Therefore, our construction finishes forming this central axis of services, in such a way that its South orientation is shown as an horizontal strip that links the ends of the residential blocks and in the north it includes the same comb arrangement as the existing center.

Program. The building has several functions, on the ground floor and below the street, there is a CAP, on the ground floor are the administrations, on the first floor a Rehabilitation center of the Hospital Universitarios de Santa María, the second floor houses the Multiple Sclerosis foundation and for Last the last floor the changing rooms of personnel of these services.

Idea. We place the building behind in relation to the alignment of the façade, in this way we give more importance to the entrances, some walkways create that intermediate situation between the street and the interior. We start from a fold formed by  forget and exterior concret walls, forming strips or shelves in which we are placing the various functions that coexist in the building. We tried to create a certain tension on the façade in the place, using its chromaticism in front of the monotony of the urban environment.

The 4 meter drop between the level of the street and the back of the site, distinguishes the section. The land descends, entering the building through the interior combs, generating elongated courtyards, favoring the lighting and ventilation of the waiting areas and maintaining the privacy of the clinical areas of the consultations. A central void gives access to the two entrance walkways, one serves the area of Rehabilitation and Multiple Sclerosis Foundation and the other to Cap.

On this lower floor and moving away from the most public area, located to the north, we find the facilities. The emergency area is located on the ground floor, with easy access for ambulances, finally the parking spaces are located behind the building, leaving the entrance facade clean. The climate of the city has been taken into account, very extreme, with very hot summers and cold winters with many fogs, taking special care that the orientations are correct for the different areas and functions, adding the necessary solar protections in the form of overhangs, slats or exterior curtains.

Construction and materials. We understand that the idea is reinforced by the materials used in its construction, transmitting solidity and transparency. Thus, the sheet is built with a green-tinted concrete slab and formwork with horizontal pine wood, the  interior courtyard will be made of transparent glass (waiting rooms) and the opaque part of galvanized sheet metal, forming a ventilated façade that generates its own shadows (Consultations). In the rehabilitation plant (P1), A cantilever will be placed on the façade that attenuates the southern sun and vertical slats that privatize the interior space in foreshortening.

The vertical finishes are HPL cladding in black exterior consultations and white passageways. The interior floors are presented with a black background and arid white in waiting areas and white in consultations, all the furniture in white.

Structure. The structure is solved in its entirety with solid slabs, supported by reinforced concrete pillars, its base module is that of two consultations, allowing cantilever work to resolve the encounter with the façade carpentry. 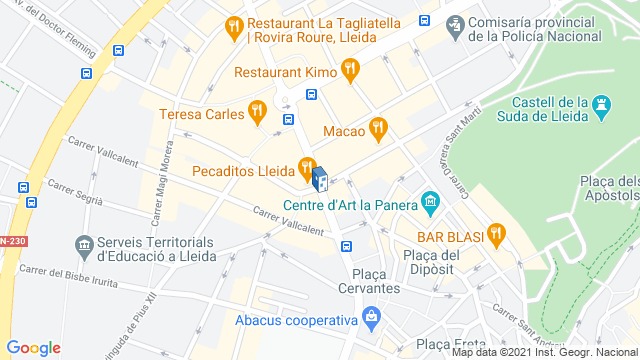 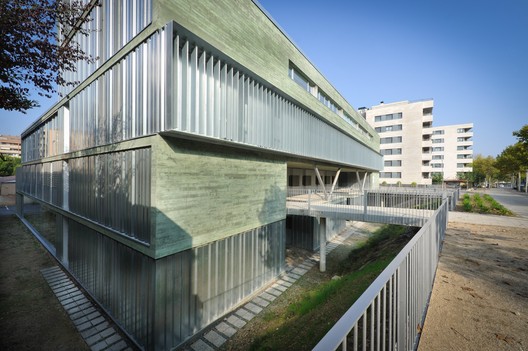